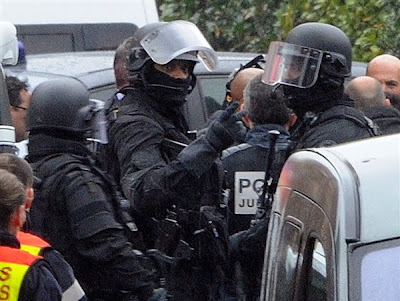 After more than a full day of negotiations, French police stormed the residence of 24 year old Mohmamed Merah on Thursday morninng. Merah was holed up in the bathroom with an AK-47, Uzi, .45 pistol and grenades, then emerging and firing wildly at officers before reportedly jumping out a window to his death- although the BBC is reporting that Merah's plunge may have been assisted by a police sniper [which is too bad- I figured we should call him "The Splatty Jihadi" from here on out. Ah well....bon voyage, cocksucker- NANESB!].

I gotta admit, a tiny sliver of me is sorry that this piece of shit wasn't taken alive, if for no other reason than he could be renditioned to some 3rd world shithole/former French colony than makes Waziristan look like a Sandals resort- such as the Central African Republic- and undergo much more comprehensive questioning in some dank, filthy dungeon from interrogators for months at a time.

The 24 year old Algerian muslim was cornered by police after investigators traced e-mail corresponence with one of the victims and the motorbike used as a getaway vehicle in Monday's shooting outside of the Ozar Hatorah Jewish school in Toulouse and after three French paratroopers gunned down while in line at an ATM in the nearby town of Montauban earlier this month. The case was reportedly broken open when police interviewed a mechanic who said that Merah had recently approached him and asked him to disable the GPS and antitheft systesm on his motorbike.

During the standoff, Merah told investigators he planned on continuing his killing spree before police caught up with him.

His erratic behavior drew attention from those around him, reporedly even before Merah left for Afghanistan. In 2010, one of Merah's neighbors filed a police report against him after luring her 15 year old son into his apartment to watch jihadi videos of beheadings and executions. According to the neighbor, police failed to take the warnings seriously and didn't follow up her complaints; meanwhile Merah threatened the neighbor and her children, saying they would die 'like all the atheists in France'.

Officials in France are coming under pressure for overlooking sorts of warning signs and red flags about Merah's background before his murder spree. French police and intelligence officials say that although Merah was known to them, they could not take him into custody since he hadn't committed any crimes prior to his rampage.

Officials still have Merah's brother in custody along with his mother and his brother's girlfriend. The online ad for a scooter that the first known victim was responding to was reportedly sent from Merah's brother's computer.

French soldiers killed or wounded in Mohammed Merah's weeklong killing spree include (left to right) Sgt Imad Ibn Zaiten, Cpl Abel Chennouf and Pvt Mohamed Legouad. Zaiten and Chennouf were gunned down at an ATM in Montauban on March 15th while Legouad was shot and killed in a residential area of Toulouse after responding to an online ad about a scooter for sale. Police believe the ad was likely set up by Merah to lure Legouad into an ambush. 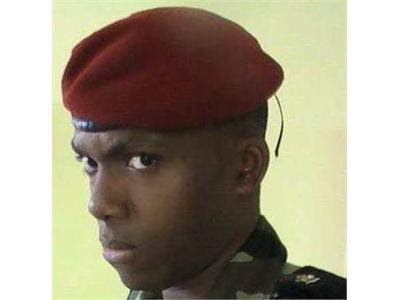 Corporal Lolic Liber (above) was wounded in the March 15th attack and remains in a coma. His parents and sister were flown out from his native Guadeloupe to be by his side. 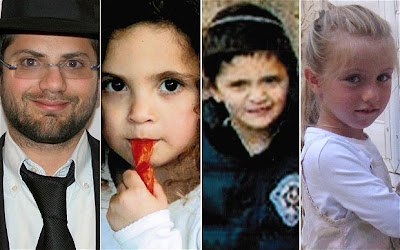 The murder victims from the Ozar Hetorah shootings have been identified as Rabbi Jonathan Sandler, 30, and his sons Gabriel, 3, and Aryeh, 6 and Miryam Mosonego, 8. 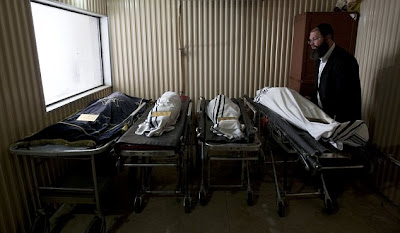 Earlier this week, the bodies of all four victims were flown out to Jerusalem to be buried in Gavit Shaul cemetary west of the city.

Curiously, the media seemed determined to continue with the neo-nazi/Anders Brevik 2.0 narrative even when it was becoming apparent that the shooter was an Islamist. While it probably would've been irresponsible for police to completely overlook the neo-nazi angle altogether during the investigation, the media seemed intent to blame the bloodshed in France on ultra right-wing zealotry even as the Gendarmerie were exchanging gunfire with a guy named Mohammed.

The paratroopers knew they were signing up for a dangerous vocation, but much like the GIs at Ft Hood in 2009, I doubt they anticipated eating a bullet from some derganged jihadi shithead once they returned to their homeland where they were presumably safe and sound.

I really don't have anything to say after seeing the tiny bundles that were once Rabbi Sandler's children. Somebody from the school was being interviewed this week and saying they couldn't find small enough caskets for them...they had to be custom ordered.

Anywhoo, this sick fuck Merah's face is no doubt gonna be plastered all over the news for awhile...I thought I'd try to offset that with images of 7 people who were better human beings than he could ever have been even if he lived to 1000.
Posted by Fenway_Nation at 10:37 PM