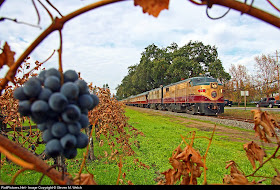 Readers of this blog in its earlier days might remember the sweetheart no-bid contract Alaska Native Corporation Suulutaaq was awarded with stimulus money to do some work on a new bridge for the Napa Valley Wine Train- a project that Suulutaaq turned right around and subcontracted to Kiewit and Sons while pocketing nearly $20 million for doing next to nothing in the process.

Well, in perhaps the most surprising news since the tide coming in or sun rising in the east, the Napa Valley project that Suulutaaq subcontracted is looking at cost overruns of at least $6.2 million.

The U.S. Army Corps of Engineers may need as much as $6.2 million to keep work on the relocation of railroad facilities and Napa Creek flood defenses on track, Julie Lucido, local project manager, told the Napa Flood Control District's board of directors Tuesday.

"If we don't get those dollars for those two projects, we could be stopped," Lucido said.

Any disruption would undoubtedly end up increasing construction costs when work was resumed, Lucido said. Taxpayers would end up paying more, she said.

Dave Cook, one of the Army Corps' Napa managers, said he expects to know within 30 days if the companies working under federal contracts in Napa can keep working.

The corps is dealing with two issues, Cook said. The company with the $65 million railroad contract racked up substantial unanticipated costs last fall, he said. Also, the corps' overall budget has been reduced by Congress, he said.

In March alone, Cook said he approved more than $3 million in additional costs for Suulutaaq Inc., the general contractor for the new railroad bridges and related street work.

Suulutaaq and its partner, Kiewit Corp, ran into major complications last year in building a new rail bridge over the Napa River. It took working seven days a week to finish the bridge's foundation prior to the winter flood season, which allowed construction to occur throughout the winter, Cook said.

Although these construction problems ran up the price, the alternative was to delay the rail project a year, Cook said. "It saved the federal government millions and millions by having those guys work seven days," he said.

The Army Corps negotiated with Suulutaaq over the bills for unanticipated work, then reached a settlement, Cook said.

With money tight for many flood projects across the U.S., Cook said the corps was developing contingency plans on how to proceed. Some projects will need to be scaled back, he said.

Don Ridenhour, the county's public works director, suggested that Napa may ultimately end up paid for. "We seem to be a very popular project in the eye of the corps," he said.

Lucido agreed, noting that Napa has been the corps' "poster child" for flood control. The Napa project was one of the first federal efforts that provided major environmental benefits as well as flood control, she said.

Until this latest bad news, local officials thought that both the rail relocation and a two-year, $15 million contract with Proven Management for Napa Creek were fully funded.

The Napa Creek project and most of the rail contract are paid for by a $99.5 million grant from the American Recovery and Reinvestment Act, the federal government's effort to jump-start the economy and end the recession.

Because Proven's winning bid was $14 million less than estimates, the corps ended up returning $14 million to Washington last September.

Keeping the $14 million in a contingency fund would have defeated the goal of the economic stimulus grant to "put people to work" right away, Cook said.

Even if this fiscal year's budget shortfall can be solved, the Napa flood project still faces an uncertain future in the new federal fiscal year that starts in October, Lucido said.

Until now, the Napa project was mostly paid for by federal "earmarks," or specific appropriations that elected officials such as Rep. Mike Thompson, D-St. Helena, put into the federal budget, she said.

But Congress and President Obama have since banned earmarks, meaning there will have to be "some other process" for keeping the Napa project going, [emphasis mine- NANESB!] Lucido told the flood board.

This is where Napa's "poster child" reputation may save the day, she said.

"Some other process"? I'm dying to know what that will be. Since California is serving as an object lesson in out-of-control government spending by being about $43 billion in the hole, I doubt the state will be riding to the rescue. The municipalities in the Golden State are hardly better off, either.

So that would most likely mean Lucido and Congressman Thompson would somehow find another way to continue federal funding in some way, shape or form. Which means we will ALL get to foot the bill for this ill-concieved, wasteful fiasco in some way shape or form.
Fenway_Nation at 1:32 PM
Share