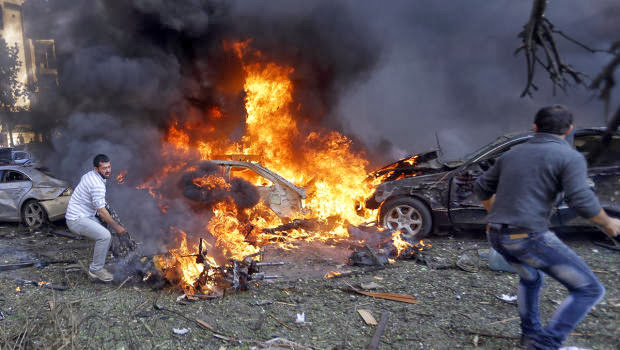 Iran's cultural attaché to Lebanon was among more than 20 people reported killed in a terrorist attack targeting Iran's Embassy in the Lebanese capital of Beirut. Beirut is considered a stronghold of the Iranian-backed Islamic militia Hezbollah and their political arm collapsed the Lebanese government as recently as 2011.

A lesser-known Al Qaeda affiliated group called the Abdullah Azzam Brigades claimed responsibility for the attack, claiming the bombings were retaliation for Hezbollah and Iran's support for the government of Bashr Al-Assad in Syria. Forces loyal to Assad have been fighting deserters from the Syrian army and Al Qaeda-aligned militants in a grinding, prolonged insurgency that has dragged on for nearly two years.

A Lebanese security official said the first suicide attacker was on a motorcycle that carried two kilograms (4.4lbs) of explosives. He blew himself up at the large black main gate of the Iranian mission, damaging the three-story facility, the official said.

Less than two minutes later, a second suicide attacker driving a car rigged with 50 kilograms (110lbs) of explosives struck about 10 metres away, the official said.

Iranian Ambassador Ghazanfar Roknabadi identified the dead diplomat as Sheikh Ibrahim Ansari. Speaking to Hezbollah's Al-Manar TV, he said Ansari took his post in Lebanon a month ago and was overseeing all regional cultural activities.

'Each of the terrorist attacks that strike in Lebanon, Syria and Iraq reek of petrodollars,' a Syrian government statement said, in a clear reference to oil-rich Gulf Arab countries that have sided with the Syrian rebels.

'People aren't sacred anymore. We aren't safe,' said a mechanic whose store windows were shattered by the blasts.

He declined to be identified because he did not want to be seen as involved in sectarian tensions that have split the Lebanese over Syria's conflict.


'People fight outside (Lebanon), but send their messages through Lebanon. With bombs. It's their SMS service,' he added.

Lebanese security officials confirmed the two bombings were both suicide attacks. They spoke on condition of anonymity in line with regulations.


Earlier this year, a car bombing in a Hezbollah-controlled suburb of Beirut killed 27 people and injured more than 300. Syrian troops had occupied Lebanon as recently as 2005 until the assassination of former Prime Minister Rafik Hariri triggered a wave of mass protests dubbed the Cedar Revolution that ultimately put pressure on the Assad to withdraw his army from Lebanon.
Posted by Fenway_Nation at 3:19 PM