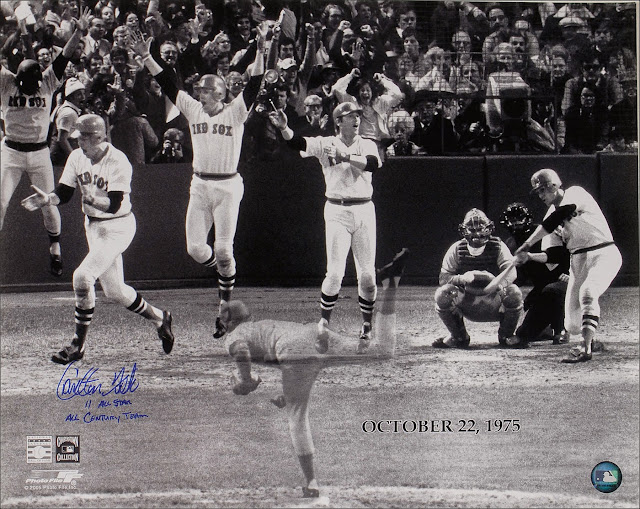 The way the Red Sox 2014 season has progressed, it seems like ages ago that the Olde Towne Team was in the World Series [despite being defending World Series Champions- NANESB!]. And if one season feels like an eternity, imagine the anguish Red Sox fans [before there was a Red Sox Nation- NANESB!] felt during that 86 year wait.

That's not to say the organization didn't have their moments in those 86 years. Despite the lopsided deal that sent Babe Ruth to New York, the Red Sox could boast the game's all time best hitter in Ted Williams. Outfielder Carl Yastrzemski would go on to be baseball's only Triple Crown batting winner for 45 seasons until Detroit's Miguel Cabrera won those honors in 2012.

However, it was During the 1975 World Series against Cincinnati's Big Red Machine, a native son of New England managed to provide even more dramatic flair to what some baseball historians consider the best-ever World Series.

I'm talking, of course, about Bellows Falls, VT native Carlton Fisk's walkoff extra-inning homer in Game 6 of the '75 World Series that was made even more memorable by the Red Sox catcher's copious body English caught on camera. Fisk took Cincinnati reliever Pat Darcy's second pitch into the netting of the Green Monster to end the game with a 7-6 win in the bottom of the 12th for Boston and tied the series up at 3-3.

Unfortunately, that would be as close as the Red Sox got to a World Series title for nine years. The Big Red Machine would later go on to win Game 7 after trailing early 3-0. Interestingly, both Fisk's iconic homer and the Reds win took place on the same day, as Game 6 started on October 21st but went beyond midnight due to extra innings.

Years later, Fisk would joke that he liked to tell people the Red Sox won the Series that year 3 games to four.
Posted by Fenway_Nation at 2:11 AM