Not content with restricting what kind of woodstoves New Englanders can have in their homes, the EPA is setting their sights on what kind of outdoor grills that people can use during cookouts.

The agency awarded a $15,000 grant to the University of California-Riverside to look into technology for grills that is intended to "reduce air pollution as well as health hazards in Southern California, with potential for global application". This has led to some concerns that the EPA will introduce further restrictions on newly manufactured propane grills.

One Missouri state lawmaker has taken exception to the EPA's maneuvering and has called for a campaign of defiance and civil disobedience dubbed the 'Pork Steak Rebellion' to preemptively thwart any moves by the agency.

It's a sentiment shared by State Senator Eric Schmitt.

Although this is not a new law the agency pushing to get on the books, Senator Schmitt isn't taking any chances.

He introduced a resolution discouraging any regulations on the tradition of backyard barbecuing. The lawmaker has a lot of support from people who couldn't agree more.

Schmitt has also taken his campaign to twitter--#porksteakrebellion--encouraging people to barbeque in their backyards.

Meanwhile, in Texas, Austin's city council is mulling an ordinance that would require BBQ joints or mobile food vendors within 150 feet of a residence to install restaurant grade scrubbers. Some businesses have stated they would have to move of shut down altogether due to the high cost of compliance.


Several council members believe the smoke being emitted from these businesses are having an adverse affect on the health and quality of life of the people who live nearby. Renteria says he’s fielded calls from concerned constituents.

“Saying that if this keeps on, they were just going to have to sell their house and move out,” said Renteria. “The whole resolution is not to try and run anyone out of business it’s just we all want to be good neighbors.”

This requirement does not apply to locations that burn supplemental wood chips and chunks in stove-top box smokers using gas-powered stoves or grills.

“We would have to leave town most likely, or just close up because it’s just not an option to put scrubbers in for eight smoke stacks,” explained Aaron Franklin, founder of the popular Franklin BBQ on East 11th Street.

Franklin says a solution is out there but they just have to find one so Austinites can enjoy BBQ without living in smoke.

“This BBQ thing creates a ton of revenue here in town,” said Franklin, who understands that something needs to be done to help neighbors cope with the smoke, but he feels that scrubbers are not the answer.

As recently as last year, the Texas state environmental agency- the Texas Commission on Environmental Quality- had received complaints about smoke had visited multiple BBQ joints in Austin, but in those instances the TCEQ found no violations.

Posted by Fenway_Nation at 10:53 PM No comments:

Escape Claws- Truckload of Lobsters Overturns on Interstate 95 in Maine

In what must have been the crustacean equivalent of that one scene from The Fugitive, a tractor-trailer carrying 30,000 lbs of lobster overturned on I-95 in Maine last week.

A tractor-trailer carrying 30,000 pounds of live lobsters from Nova Scotia overturned early Wednesday morning on Interstate 95 southbound during whiteout conditions, according to the driver and state police.

The driver, Horst Puff, 55, of Greenfield, Nova Scotia, and his dog, Banjo, 10, were not injured in the crash, which occurred around midnight Tuesday as Puff tried to avoid striking a vehicle that had spun out in front of him, both he and state police Trooper Joseph Chretien said at the scene later Wednesday.

“I’m OK,” Puff said, as he stood on I-95, his back against the wind. “There were dry roads from Bangor down to here. Everything was OK.”

He said then there was blowing snow, whiteout conditions and a car in front of him. “The car hit the brakes. I hit the brakes,” he said. “I saw nothing and came too far left and tipped over and Banjo went on top of me. He was on my chest.”

The car that was in front of the truck never stopped, and the driver’s identity is not known, police said.

The truck came to rest in the median about two miles north of exit 133 and near the Fairfield town line. There it stayed all day Wednesday, before it was finally removed around 7 p.m. The truck had to be righted with a crane, and the difficulty as well as the strong wind that blew all day delayed the move. Both southbound lanes were briefly closed for the removal.

Puff was driving the 2007 International truck owned by Gerhardt Trucking of Nova Scotia, taking the lobsters to wholesalers in Brooklyn, N.Y., and Rhode Island.

The lobsters, in 300 crates that weighed about 100 pounds each, survived the wreck and were being taken out of state following inspection by a state agriculture official, Chretien said.

Banjo, a ten year old Australian Shepherd-husky mix, survived the collision and is being cared for at nearby Boulet's Truck Service in Fairfield, ME. Gerhardt sent another truck and trailer down from Nova Scotia to bring the lobsters to their destination in New York. Investigators and the insurance company have said that the truck would most likely be written off as a total loss.
Posted by Fenway_Nation at 11:09 PM No comments:

Today's Train Of Thought- Batten Down the Hatches! March 26th, 2015 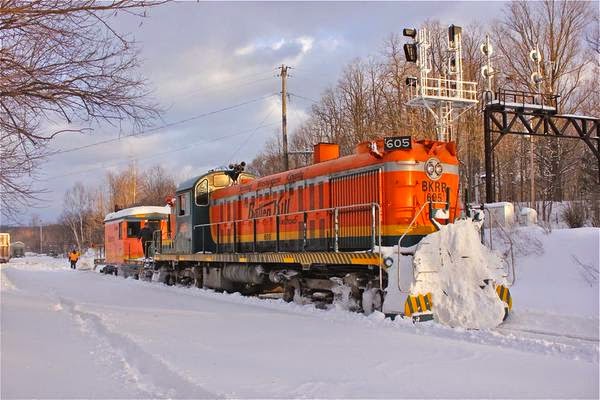 With today's train of thought, we bid farewell to a particularly eventful and record-setting winter with this Christmas-card like scene in a quiet corner of upstate New York.

Interchanging with Pan-Am's former Boston & Maine Fitchburg Main at the tiny hamlet of Eagle Bridge, NY, the Batten Kill operates some 30 miles of track in rural Washington County on the ex-Delaware & Hudson 'Slatepicker' line between Eagle Bridge and Salem, NY [which used to run further north to Rutland, VT- NANESB!] as well as the former Greenwich & Johnsonville line between Greenwich and Greenwich Jct, NY.

The primary source of traffic for the Batten Kill is a feed mill around Greenwich Jct, but in recent years the line has also made some extra money storing freight cars on the seldom-used line to Salem during the economic downturn. Up until 10 years ago, the Batten Kill also offered passenger excursions and an intact-but-disused line to the eastern shore of the Hudson at Thomson from Greenwich once made it an attractive candidate for hauling unit trains of PCB contaminated sludge from the river as part of a multi-year dredging project undertaken by GE.

The railroad is best known among northeastern railfans for their historic all-ALCo roster, though. Technically the railroad owns three RS3 roadswitchers- the youngest of which is 62 years old. BKRR #605 started out life on the Lehigh and Hudson River before winding up in Vermont- first as part of the St Johnsbury and Lamoille County and then the Vermont Railway- before being sold to the Batten Kill upon its 1982 formation. The Batten Kill also inherited RS3 #4116 from predecessor Greenwich & Johnsonvlle and is still painted in the orange and black scheme. The third RS3 was also purchased secondhand from the Vermont railway and is kept as a parts supply behind the Greenwich enginehosue.

However, the Batten Kill has also been known to borrow motive power from the nearby Vermont Railway, Canadian Pacific or Pan Am if there are problems with the #605 and #4116 simultaneously or the enginehouse has been cut off from the rest of the line. Most recently, a burly Pan Am SD40-2 was brought in to help the two ALCo raodswitchers with removing more than 40 COFC spine cars that were in storage on the line in February 2015.

Here, Batten Kill #605 is seen with the tiny railroad's flanger at the Pan-Am interchange in Eagle Bridge, NY in the last rays of sunlight on Valentine's Day 2014. According to photographer Colin Buckoski, the #605 headed down with the flanger to clear the line and headed back to the feed mill in Greenwich Jct with five cars from Pan-Am later on that night.
Posted by Fenway_Nation at 10:05 PM No comments: