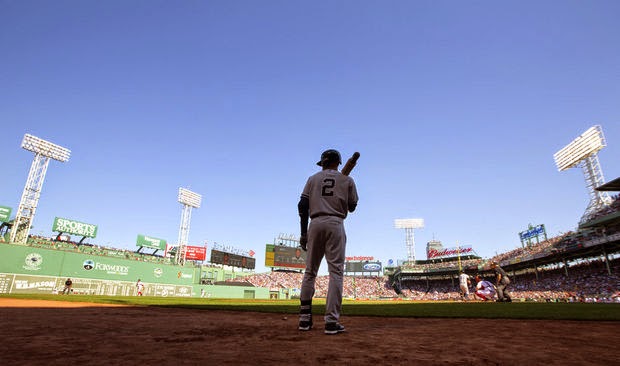 RED SOX- The Major League Baseball regular season came to an end on Sunday and with it, the disappointing 2014 seasons for both the New York Yankees and defending World Series champion Boston Red Sox. Fans of the Red Sox were hoping for a more spirited defense of their 2013 title while Yankees fans wanted a postseason appearance for captain Derek Jeter's final season.

Although the Yankees had been mathematically eliminated by that point, Jeter's final home game at Yankee Stadium ended in memorable fashion as the Bronx Bomber's shortstop hit a walkoff RBI single in the bottom of the 9th, breaking a 5-5 tie against the AL East Champion Baltimore Orioles on September 25th.

The Yankee captain's final game on Sunday drew a national TV audience as the game was televised on TBS. The Yankees got out to an early lead in the 3rd inning, thanks to a one out, two RBI single from Ichiro Suzuki. Jeter made it a 3-0 game when he hit a high chopper up the 3rd base line that he beat out for an infield single as Suzuki made his way home. As it turned out, that would be it for Jeter. Manager Joe Girardi immediately decided to pull Jeter for pinch runner Brian McCann.

The Yankees would go on to win by a 9-5 final and would take two out of three from the Red Sox in the weekend series. The Red Sox, finishing a mere 25 games out of first place in the AL East, wrapped up the season with a 71-91 record and were increasingly unrecognizable from the 2013 squad that won the World Series. For instance, the only starting pitcher remaining from the 2013 team was Clay Buchholz after Peavy, Lackey, Lester and Doubront were traded earlier in the season.

WASHINGTON NATIONALS- The Nationals have done nothing less than quietly dominate the National League East this season. Although they were among the first to secure a playoff berth, they ended the regular season in dramatic fashion when Nats starter Jordan Zimmerman threw the Nats first no-hitter.

Heading into the top of the 9th inning, Washington had a 1-0 lead over the Miami Marlins with two away when outfielder Christian Yelich belted what looked like a sure double to not only break up the Zimmerman's no-hit bid, but put the tying run in scoring position for Miami. However, late inning defensive replacement and rookie outfielder Steven Souza, Jr made a spectacular diving catch to rob the Marlins of a base hit, ending the ballgame and sealing Zimmerman's no hitter.

The well-rested Nats will play the San Francisco Giants in the NLDS beginning Friday, October 1st. First pitch is scheduled for 3:07 ET at Nationals Park and the game will be televised on Fox Sports 1. 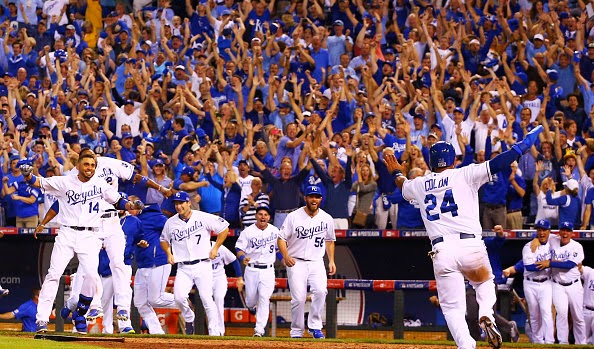 KANSAS CITY ROYALS- After narrowly missing out on the AL Central pennant, the Kansas City Royals managed to secure their first postseason berth in nearly 30 years, prompting a 1-game playoff with the Oakland A's at Kauffman Stadium on Tuesday Night.

With Jon Lester on the mound for Oakland, KC took a 3-2 lead with an RBI double from Lorenzo Cain and an RBI single from Eric Hosmer in the bottom of the 3rd. However, the Royals bullpen would implode in the top of the 6th, allowing a 3-run homer off the bat of Brandon Moss before an out was even recorded. The A's would get two more runs to make it a 7-3 ballgame and quiet down the crowd at Kauffman Stadium. However, the Royals would immediately start to chip away with RBI singles from Cain and Billy Butler in the bottom of the 8th along with Hosmer coming home on a wild pitch to make it a one run game. In the bottom of the 9th, pinch hitter Josh Willingham led off the inning with a single before being pulled for pinch-runner Jarrod Dyson. Dyson moved into scoring position on a sac bunt by Alcides Escobar before stealing 3rd. Dyson would then come home on a Nori Aoki sac-fly to tie the game up at 7-7 and force extra innings.

The 7-7 deadlock wouldn't be broken until the top of the 12th when Alberto Callaspo hit an RBI single for the Athletics, giving them an 8-7 lead over KC. However, Hosmer would get a 1-out triple on ball that barely stayed in the park and Christian Colon would get an RBI infield single in the bottom of the 12th, bringing Hosmer home to tie the game up once more- this time at 8-8. Alex Gordon fouled out to third for the second out, bringing up Salvador Perez, who had gone 0-5 on the night. However, Perez managed to hit a ball fair past a diving Josh Donaldson and into left field to bring home the winning run.

The win set up an ALDS matchup with another AL West team- this time the Angels- on Thursday night. Despite having the best record in all of baseball this season, the Angels never led in what would be an extra innings affair much like Tuesday night's affair. Royals 3rd baseman Mike Moustakas would turn out to be key in this one, hitting a tie-breaking solo homer to lead off the top of the 11th to make it 3-2 Kansas City. Greg Holland would come out of the Royals bullpen and get a clean 1-2-3 inning to close out game one for the Royals.

ELSEWHERE IN THE AMERICAN LEAGUE- The Baltimore Orioles took Game 1 of their series against the Detroit Tigers after the Tigers bullpen imploded and allowed 8 unanswered runs in the bottom of the 8th in what had previously been a close game. In fact, between the bottom of the 2nd and 7th innings, it was a pitcher's duel between Max Scherzer and O's starter Chris Tillman.

The Orioles go on to win game one of their series by a 12-3 final and the series will resume almost immediately on Friday at noon.

MEANWHILE, IN THE NATIONAL LEAGUE- It's actually been pretty quiet in the National League this week, with only one game since the end of the regular season on Sunday- that was the single game Wild Card playoff between the San Francisco Giants and the Pittsburgh Pirates at PNC Park on Thursday night.

San Francisco's Brandon Crawford would hit a grand slam off of Pirates starter Edinson Volquez in the top of the 4th inning to give the Giants an early 4-0 lead. That would be all the Giants needed to get past Pittsburgh as Madison Bumgarner threw a complete-game 4-hit shutout on Thursday as San Francisco cruised to an 8-0 win. The victory earns the Giants a matchup against the Nationals inside the beltway for game one of the NLDS on Friday night.

The other NLDS matchup on Friday features the Dodgers hosting the St Louis Cardinals at Chavez Ravine on Friday night. 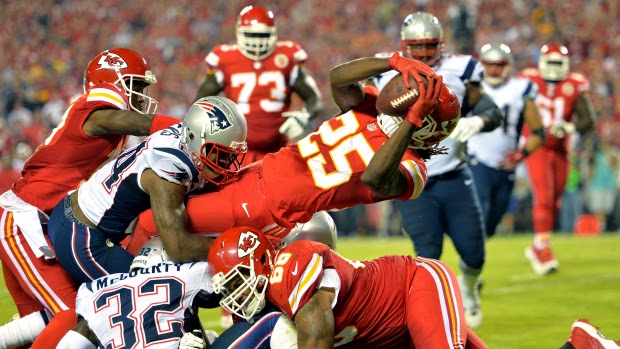 PATRIOTS- New England's first Monday night game of the 2014 season didn't go particularly well. Coming off a win in which the Pats seemed to just barely hold off the woeful Raiders at Foxborough, the Patriots seemed unprepared and overwhelmed by their Monday night game at Arrowhead Stadium in Kansas City.

The Kansas City Chiefs offense and QB Alex Smith seemed to move the ball at will, and while the Chiefs 17-0 lead at halftime didn't seem insurmountable, things got worse for the Patriots in the second half as Kansas City jumped out to a 27-0 lead before the Patriots finally got on the board. Believe it or not, things actually got worse for the Patriots in the 4th with the Chiefs scoring 14 quick points thanks to an Alex Smith TD and a Hussain Abdullah pick six of Tom Brady.

The only bright spot was when backup QB Jimmy Garoppolo got some playing time and managed to put New England in double-digits on a 3 minute, 81 yard drive that was capped by a 13 yard TD pass to Rob Gronkowski. The Patriots would go on to lose by a 14-41 final.
Posted by Fenway_Nation at 11:09 PM