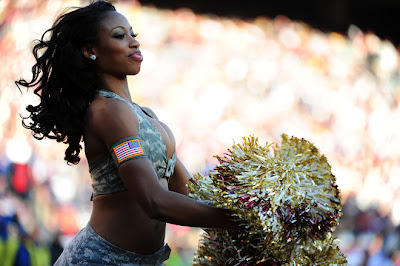 For awhile, the cheerleaders for the 4-8 Redskins had something to cheer about in Sunday's close contest with the New England Patriots. Scott Cunningham/Getty Images

NFL: The New England patriots managed to win their 5th game in a row on Sunday, holding off the Washington Redskins late in the 4th quarter at FedEx field in Landover, MD.

New England would take a 34-27 lead late in the 3rd on a Brady to Welker TD catch and run. After Redskins CB Josh Wilson picked off Brady in the end zone late in the 4th, the Redskins started out on their own 20 for their final possession, managing to march down inside Patriots 10 yard line on 10 plays in the span of 4 and a half minutes. However, just when the Redskins looked like they were going to punch it in the tie the contest up at 34-34, Washington QB Rex Grossman was picked off by LB Jerod Mayo with 22 seconds remaining in the 4th quarter, bringing Brady and the offense out to take a knee and preserve the 34-27 win.


Rob Gronkowski had 6 catches for 160 yards and 2 TDs while Wes Welker caught 7 for 86 yards and 1 TD. Perhaps somewhat alarmingly, the Patriots allowed 463 total yards to the NFC East cellar-dwelling Redskins on Sunday, an clear indication they need to start getting their proverbial shit together ahead of Sunday's game at Mile High in Denver. 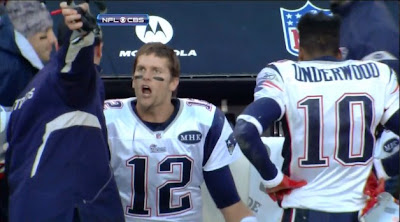 In a development that has no doubt shifted attention from why exactly the Bruins benched Tyler Seguin in Winnipeg last week, Tom Brady and offensive coordinator got into a shouting match over the late pick, although both parties insist that's behind them and they're focused on the Denver game coming up this weekend during separate press conference earlier this week.

We're at the flex-schedule portion of the NFL season, where they can slot a Sunday afternoon game into the Sunday Night Football slot on NBC if they feel the matchup would've been a bigger draw. With that in mind, I'm a little surprised that the Patriots and Broncos weren't bumped up to the prime-time Sunday night matchup [NBC had opted to stick with the originally scheduled Chargers vs Ravens game, which while decent, isn't as compelling as Brady and Tebow going head-to-head for the 1st time- even if you aren't a Broncos or Pats fan- NANESB!].

ELSEWHERE IN THE NFL: With the Broncos come-from-behind performance against the Chicago Bears, I'm honestly a little surprised there isn't more buzz nationwide for this upcoming New England/Denver game.

After taking a 10-0 lead early in the 4th quarter thanks to a 57 yard Robbie Gould FG, the Bears would then go on to give up a TD and a 59-yard Matt Prater FG in the last two minutes and eight seconds of regulation to knot the contest up at 10-10 and force OT. Although the Bears would get the ball first in the OT, RB Marion Barber would fumble on the Broncos 38 yard line.

QB Tim Tebow would move the ball as far as the bears 34 yard line before kicker Matt Prater would split the uprights with a 51 yard FG to give Denver the 13-10 win in OT, good for their 6th straight and the AFC West lead. 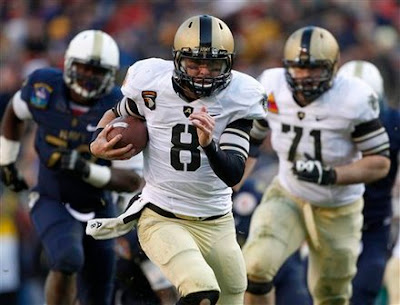 AP Photo
NCAA FOOTBALL: With nothing on the line other than bragging rights or pride, the NCAA regular season wrapped up on Saturday with the 112th Army-Navy game. Typically the teams meet in Philadelphia, but this season the game was played at FedEx Field in Landover, MD.

This year's game had a much more brisk pace to it and both offenses seemed to click, unlike in recent years where it was either a lopsided blowout or a defensive slog that could decided by a pivotal turnover or goal-line stand. Although Navy got out to a 14-0 lead before Army got on the board thanks to a 34 yard TD run by Black Knights QB Trent Steelman with 4 and a half minutes to go before the half before tying the contest up at 14-14 with 55 seconds to go in the half.

However, after tying the contest up in the 3rd at 21-21, Navy began to pull away with a pair of FG's in the 4th that were the difference makers. Although much closer than the previous couple of Army-Navy games, the end result is still the same. Navy goes on to win the Army-Navy game for the 10th year in a row by a final of 27-21. A side note of interest is that this is the last game before Navy QB Alexander Teich goes on to Navy SEAL training.

ELSEWHERE IN NCAAF: Coming off an impressive 5-game win streak, including upending the #5 Oklahoma Sooners, Baylor Bears QB Robert Griffin III was awarded the Heisman trophy this weekend. Griffin beat out early favorite Andrew Luck from Stanford for the honor. The 6ft 2 Junior had 3,998 yards and 36 TDs for the Bears this season, good enough for a 9-3 record and an invite to the Alamo Bowl where they will face the Washington Huskies on 12/29.

FOOTBALL CHAMPIONSHIP SUBDIVISION: Maine's Warren Smith threw for 2 TDs and 229 yards on Saturday against Georgia Southern in Statesboro, GA, but was picked off in the Black Bears 35-23 loss to Georgia Southern in the NCAA Football Championship Subdivision playoffs.

This sets up a semifinal where Georgia Southern faces North Dakota State while Sam Houston State will face Montana to see who advances to the FCS title game in Frisco, TX on January 7th.

NHL: After snapping a 2-game losing streak in Columbus in a contest that saw Zdeno Chara leave with a lower body injury and Claude Julien pull Thomas for Rask after falling behind 2-0, the Bruins managed to go on and win (thanks in no small part to Joe Corvo) by a 5-3 final before returning to the garden to face the Los Angeles Kings Tuesday night. 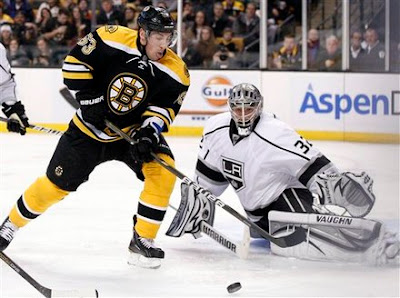 The Kings, with issues of their own, had fired head coach Terry Murray and were coming into Boston riding a 4 game losing streak.

Tuesday night's game was mostly Tukka Rask and Brad Marchand. Rich Peverly got the B's on the board in the 1st, beating Kings goali Jonathan Quick with 6:32 to go in the opening period before Marchand would thoughtfully add two more of his own- one in the 2nd and one in the 3rd- while Tukka Rask would stop all 41 shots he faced. Neither team converted on the power play and Quick would allow in 3 goals on 22 shots faced on the night.

So after losing two in a row, the Bruins have a modest 2-game win streak that they'll hoping they can add on to when they hit the road in Ottawa on Wednesday night.

Center Zach Hammill was called up from the Providence Bruins on an emergency basis and was put into the 4th line, netting an assist in Tuesday night's shutout of LA.

The Ontario Teachers’ Pension Fund have sold their majority stake in Maple Leaf Sports and Entertainment to Rogers Sportsnet and Bell Canada for a whopping $1.3 billion. The partnership is an awkward one as Bell and Rogers are competitors in communications. Bell also owns a small part of the Montreal Canadiens on top of it all. 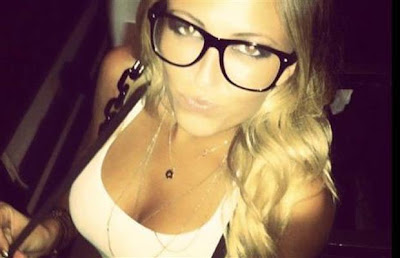 The recent lack of activity from Wayne Gretzky's loquacious (and hot) daughter's twitter account led to speculation that the Great One was forming a group to purchase the OTPPF's stake of Maple Leafs Sports & Entertainment and was trying to pre-empt any social-media meltdowns that would end up reflecting poorly on #99.

PITTSBURGH: Penguins star Center Sidney Crosby will reportedly miss additional time due to what's described as 'concussion-like symptoms'. Crosby hasn't seen ice-time since last weeks 3-1 home loss to the Bruins and reports are circulating that he may be out indefinitely.

NCAA HOOPS: With 9.4 seconds left to go in Saturday's #8Xavier/Cincinnati game, a melee followed when Xavier senior guard Tu Halloway taunted the Cincinnati bench. That led to a bench clearing brawl in which players from both teams punched, kicked, elbowed and stomped each other, some of them coming away with open gashes on their faces.

Each team has suspended 4 players and some are questioning the future of the crosstown rivalry.

SYRACUSE: A New York state prosecutor who interviewed two of assistant coach Bernie Fine's accusers says he found the men to be credible, but no action could be taken because the statute of limitations had passed. Two former ballboys for the Orangemen have accused Fine of molelsting them over an ongoing period and have recently filed suit against the University

MLB: National League MVP Ryan Braun has tested positive for performance enhancing drugs and could face a fine and 50-game suspension if the initial findings are upheld, ESPN reports.

Braun is disputing the findings through arbitration and a spokesman said that 'Highly unusual cirumstances' surrounding his case will eventually prove his innocence.
Posted by Fenway_Nation at 11:48 PM