Today's Train of Thought- Pushing off Into Winter, December 21st, 2011 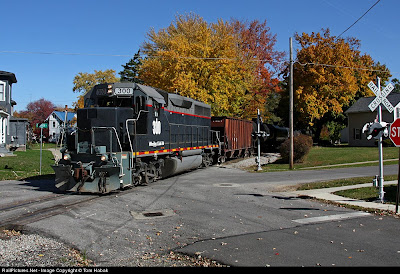 Today's train of thought for the final day of fall takes us to the Buckeye State.

Here, railpictures.net contributor Tom Habak caught two-tone grey GP40-3 #300 heading westbound on the point of Toledo-bound train 223 through Norwalk, OH in October 2009. Well out of sight, a rebuilt SD40-3 is pushing on the rear.

The #300 arrived on W&LE property from the Union Pacific in armour yellow paint, but after undergoing a rebuild, the yellow portion was replaced with a darker grey (the lighter grey along the top is still from the UP). The locomotive was originally built for the New York Central before being sold to the Chicago & Northwestern. The C&NW was acquired by the Union Pacific in 1995.

The W&LE has demonstrated a penchant for painting their locomotives in colors reminiscent of the Denver, Rio Grande & Western railway (black w/bright orange lettering and stripes) to the point where some of the lcomotives they purchased from Union Pacific still in Rio Grande paint and lettering had been restored to their original DRG&W pain and road numbers. The #300 so far hasn't recieved such tratment because it never logged any time with the Rio Grande.

Interestingly, the towns around Norwalk- such as Danbury, New Haven and Groton- are named after towns and cities in Connecticut as settlers from that state made their way west starting in 1800.
Posted by Fenway_Nation at 8:49 AM