NHL: The Boston Bruins impressive streak of going without a regulation loss since October 29th came to an end on the frigid windswept Manitoba plains Tuesday night.

The B's were without the services of Tyler Seguin for their first trip back to Winnipeg since 1995. Seguin reportedly missed a team meeting on Tuesday morning and as a result was scratched from the lineup. Tim Thomas also had Tuesday night off, with Tukka Rask starting in goal.

The Jets got on the board first with a goal from LW Andrew Ladd late in the first. After a scoreless second, the Bruins managed to tie the game at 1-1 early in the 3rd with a tally from Shawn Thornton. However, about 90 seconds later Bryan Little would get the go-ahead goal for Winnipeg, which would turn out to be the game-winner.

Tukka Rask stopped 33 of 35 shots faced while Jets goalie Ondrej Pavelec stopped 39 of 40 shots faced and both teams went 0 for 3 on the power play on Tuesday night.

Some home cooking didn't help the Bruins much on Thursday night either when they returned to the Garden for what amounts to a quickie 1-game homestand. Thursday night's game against the Southeast-leading Florida Panthers remained scoreless all the way until late in the 3rd period, when the Panthers got on the board thanks to a goal from Florida's Tomas Kopecky with 2:22 in regulation. With a little over a minute to go, the Bruins pulled Tim Thomas, but Kris Versteeg got the empty-netter to make it a 2-0 Florida lead with 52 seconds remaining.

Tim Thomas turned aside 28 of 29 shots faced while Florida goaltender Jose Theodore stopped all 40 shots he faced on the evening. Neither team scored on the Power play- with the Bruins getting 4 opportunities and the Panthers getting just one.

Since upending the Pittsburgh Penguins on Monday night, the Bruins have lost two in a row and have been overtaken in the Eastern Conference lead by both Florida and Philadelphia (Philly took care of the Penguins in a Keystone State matchup on Thursday night).

For their next game, the Bruins will travel to Nationwide Arena in Columbus, OH to take on the Blue Jackets Saturday evening. Puck drops at 7 PM ET and the game will be televised on NESN.

NHL REALIGNMENT: The NHL Board of Governors authorized a radical new plan that would realign the entire NHL into four conferences instead of the current format of two conferences with three divisions each. The new alignment would take effect at the start of the 2012-2013 season and is pending the approval of the NHL Player's Association.

Under the proposal, the unnamed Conference the Bruins are in would resemble the current Northeast Division. Ottawa, Buffalo, Montreal and Toronto would be in the same Conference, but the Florida Panthers and Tampa Bay Lightning would also be added.

The new format also guarantees that each team in the league would play each other at least twice- once at home and once on the road.

This was considered in part as a solution to the Thrasher's move to Winnipeg, yet still playing in the Southeast conference where the closest team is 1500 miles away. Initially, there was talk of solving this by having Winnipeg switch Divisions with Columbus or even Detroit (personally, I though trading places with Nashville would've made more sense). 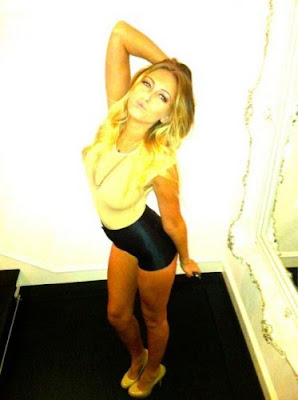 ELSEWHERE IN THE NHL: Just to let you know, Paulina Gretzky's twitter account is still showing signs of life (however sporadic) after numerous media reports claimed she was deleting the account.

NCAA FOOTBALL: With only one regular season game to go [Saturday's Army/Navy game from FedEx Field in suburban Washington D.C.- NANESB!], the complete 2011-12 bowl schedule has been released this week. Perhaps the biggest surprise (or disappointment if you're not an SEC fan) is Alabama playing Louisiana State for the BCS title game in New Orleans instead of an Oklahoma State/Louisiana State matchup.

Without any further delay, I bring you this season's bowl-a-palooza:

[Between the University of Massachusetts Minutemen joining the Mid America Conference and the San Diego State Aztecs joining the Big East, I can't wait until the two teams get together for the 2013 'Piss Poor Geography' Bowl- NANESB!] 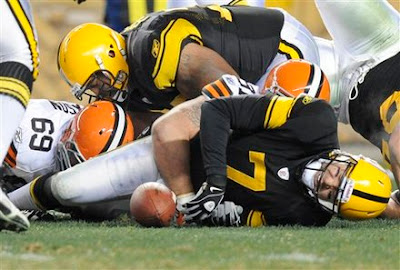 NFL: After leaving Thursday night's Browns/Steelers game in the second quarter with what was described as a high ankle injury, it looked as though Steelers QB Ben Roethlisberger was done for the night, if not the next few weeks.

However, with a 7-3 lead, the Steelers were still very much in it even before Roethlisberger returned in the 2nd half. With 2:52 to go in the 4th quarter, Pittsburgh would pad their lead over the Browns thanks to a Roethlisberger pass to WR Antonio brown for a 79 yard pass and run for the end zone to make it 14-3, which also happened to be the final score.

The Steelers will have a much more difficult test next Monday when they play the San Francisco 49ers on Monday Night football. San Francisco has already clinched the NFC West title.

OTHER NFL NEWS: Former San Diego Chargers linebacker Lew Bush- who was with the team during their sole Super Bowl appearence during the 1994 season- has passed away at the age of 42, dead from what the AP indicates is an apparent heart attack. A Washington State alumni, Bush played in the NFL for 9 seasons- six of them with the Chargers and the final three with the Kansas City Chiefs.

MLB: Former St Louis Cardinals 1st Baseman Albert Pujols is heading to Southern California. The Angels are said to have reached a deal with the Cardinals slugger for 10 years that's reportedly worth more than $250 million.

While many had projected the Cards star first baseman might be part of a revamped Florida Miami Marlins, Pujols decided to head west instead and joins other big money players on the Anaheim roster such as outfielders Vernon Wells or Torii Hunter.

Meanwhile, in South Beach, although the Marlins came up empty in their pursuit of Pujols, they did sign former White Sox starter Mark Buehrle to a 4 year, $58 million deal. Buehrle went 13-9 with a 3.58 ERA for the ChiSox last year. The Marlins also managed to sign former Padres closer Heath Bell and Mets shortstop Jose Reyes. Bell had 42 saves for the Padres last season with a 2.44 ERA and 51 strikeouts. Reyes had a batting average of .337 with 7 homers and 44 RBIs for the Mets last season.
Posted by Fenway_Nation at 10:50 PM