US Ambassador to Libya, 3 Other Americans Murdered in Attack on Consulate in Benghazi 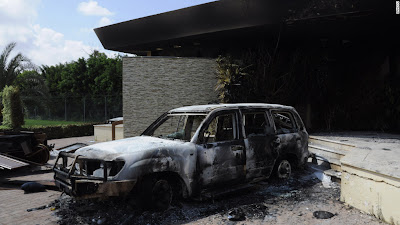 Charred vehicle on the grounds of the US Consulate in Benghazi, Libya. The diplomatic compound was overrun by a mob of roughly 1,000 people before gunmen in the crowd opened fire on the consulate and vehicles with on Tuesday, September 11th

US Ambassador to Libya Chris Stevens was among four Americans murdered on Tuesday night after a rampaging crowd managed to break in to the grounds of the US Consulate in the eastern city of Benghazi. Heavily armed terrorists moving within the crowd then opened fire on the consulate and diplomatic staff with AK47s and rocket-propelled grenades.

The crowd had reportedly paraded around Ambassador Stevens' corpse while taking photos. A local media report quoted a Libyan official in Benghazi said that the ambassador had died of suffocation. Foreign Service Information Management Officer Sean Smith, an avid online gamer, had reportedly left a message a few hours prior to the attack on the Benghazi facility that read ”Assuming we don’t die tonight. We saw one of our ‘police’ that guard the compound taking pictures.”. Smith was also fatally injured in the attack.

A report from CBS earlier on Wednesday quoted an official from Libya's Interior Ministry who claimed that after the consulate's Libyan security detail evacuated the Ambassador and diplomatic staff, some of the security staff had reportedly tipped the crowd off to the Ambassador's new and supposedly secure location.


Wanis al-Sharef, a Libyan Interior Ministry official in Benghazi, said the four Americans were killed when the angry mob, which gathered to protest a U.S.-made film that ridicules Islam's Prophet Muhammad, fired guns and burned down the U.S. consulate in Benghazi.

He said Stevens, 52, and other officials were moved to a second building - deemed safer - after the initial wave of protests at the consulate compound. According to al-Sharef, members of the Libyan security team seem to have indicated to the protesters the building to which the American officials had been relocated, and that building then came under attack.

Although the short film had been blamed for inciting angry mobs in both who breached US Diplomatic missions in Libya and Egypt on Tuesday, intelligence agencies say the fact that the murders took place on the anniversary of the September 11, 2001 terrorist attacks it's increasingly likely that the attack was planned well in advance by an Al Qaeda offshoot. Intelligence and media reports indicate that a Libyan jihadist group operating under the name of Ansar Al Sharia is behind the attacks. Stevens was the first US Ambassador to be killed while on assignment since Adolph Dubs- the US Ambassador to Afghanistan- was killed in Soviet-occupied Afghanistan in 1979.

Benghazi is the eastern city that's considered the cradle of the uprising that ultimately toppled Mummar Ghdaffi's 42-year reign in Libya. Ghdaffi's Army was on the cusp of crushing the uprising and seizing Benghazi before the international community intervened in the form of NATO air strikes in February 2011. After months of fighting, Ghdaffi was captured and killed in a pitched battle near his hometown of Sitre. Ambassador Steven's had reportedly worked closely with Libya's transitional council after the Ghdaffi regime fled the capitol at Tripoli. The property was reportedly a temporary location that wasn't as secure as a number of permanent facilities.

The Benghazi assault came just hours after protestors in Egypt breached the walls of the American embassy there and tore down the American flag, replacing it with a black flag with white arabic script used by Al Qaeda.

However, instead of immediately condemning the provocation from the Egyptian crowd, the US Embassy released multiple statements criticising the producers of the movie the protestors were supposedly upset with and a series of tweets that bordered on apologetic. The official US Embassy in Cairo statement reads as follows [empasis mine].

The Embassy of the United States in Cairo condemns the continuing efforts by misguided individuals to hurt the religious feelings of Muslims - as we condemn efforts to offend believers of all religions. Today, the 11th anniversary of the September 11, 2001 terrorist attacks on the United States, Americans are honoring our patriots and those who serve our nation as the fitting response to the enemies of democracy. Respect for religious beliefs is a cornerstone of American democracy. We firmly reject the actions by those who abuse the universal right of free speech to hurt the religious beliefs of others.

The White House distanced themselves from the Cairo Embassy's statements while Republican presidential candidate Mitt Romney criticized the statements coming from the Cairo Embassy as 'an apology for American values' and the Obama Administration's repudiation of the statements as an example of mixed signals the President has been sending to the international community. In Cairo, police and protestors clashed for a second straight night.

A team of about 50 Marines has been dispatched to Tripoli to secure the US Embassy in the Libyan capital while two guided missile destroyers have been deployed off of the coast of Libya.
Posted by Fenway_Nation at 10:39 PM