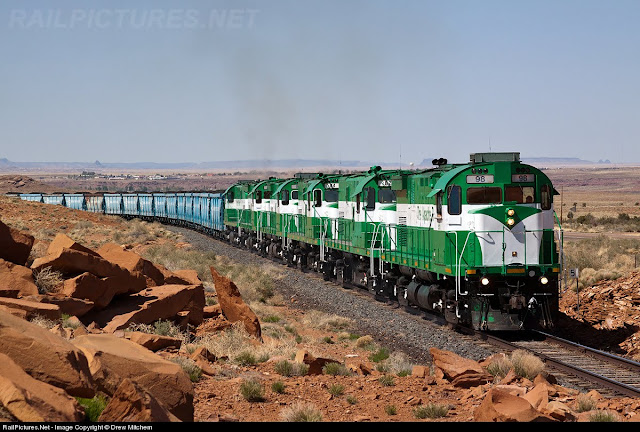 Apache C424 #98 is seen leading six green & white ALCos southbound out of Holbrook, AZ with 60 loads of coal for the Catalyst Paper mill in Snowflake in May 2011. Drew Mitchem photo.

APACHE- Eastern Arizona's Apache Railroad may be on borrowed time as its parent company and primary shipper announced that it plans to shut down the massive paper mill in Snowflake, AZ this fall.

Citing lowering demand for newsprint and increased fuel prices, Richmond, BC-based Catalyst Papers issued a statement on Monday announcing that they would be permanently closing the Snowflake mill by September 30, 2012.


"Pink slips" are expected to be in the hands of workers by 4 p.m. this afternoon, according to plant officials.

They have also told state officials that if they could get their hands on enough raw wood fiber, perhaps as part of the 4FRI initiative, they could convert back from recycled to fresh paper. That conversion, they have said, would cost around $30 million, which they are apparently not willing to invest on their own.

"This is horrible," said State Senator Sylvia Allen (R-Snowflake) Monday night. "That's around 380 direct jobs, but with truck drivers, rail and other ancillary jobs, it could mean 1,000 jobs.

Handling inbound shipments of coal for the mill's power plant and outbound shipments of paper products, the Apache remains popular with rail enthusiasts for their curious choice of operating exclusively with ALCo locomotives when the manufacturer closed its doors in 1968. 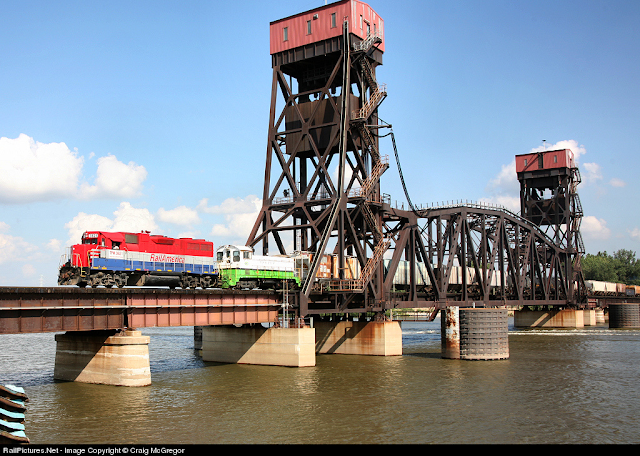 GENESEE AND WYOMING- In a move that would consolidate the two largest shortline operators in North America, Genesee & Wyoming has reportedly reached an agreement with Fortress Investment Group [NYSE- FIG] to purchase shortline holding company Rail America for $1.39 Billion.

The transaction would give Connecticut-based Genesee & Wyoming control of 111 lines total, pending regulatory approval from the Surface Transportation Board. Genesee & Wyoming reported that they would incorporate the existing Rail America lines into the GWR corporate structure and operations.


Genesee & Wyoming said the deal would diversify its customer and commodity bases, increase its total revenue by nearly two-thirds, to about $1.4 billion, and double its North American revenue to about $1.1 billion. Following the transaction, Genesee will have 111 railroads.

RailAmerica shareholders will receive $27.50 a share, an 11% premium over Friday's closing price.

Shares of Rail America [NYSE- RA] have seen an 83% increase in value since the beginning of 2012 while Genesee & Wyoming shares are down 7% over the same period of time. GWR attributes that in part on a decline in the demand for coal- a commodity many of of its subsidiaries haul. 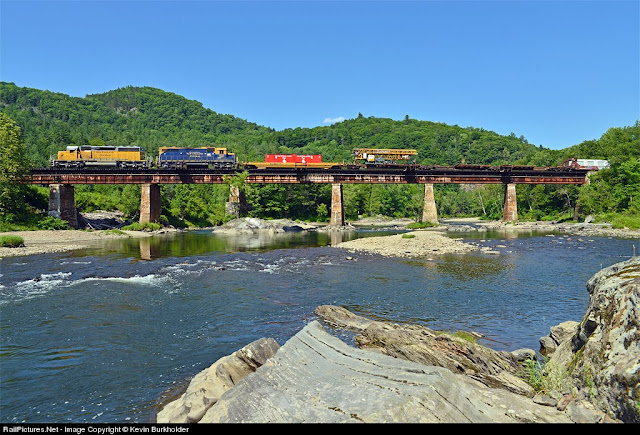 NEW ENGLAND CENTRAL- The America's Cup is coming to Vermont!

Actually, that's only partly true- the America's Cup came and went from the Green Mountain state, only it was in a form that hardly anybody would recognize.

The America's Cup tournament is a yacht racing tournament that pits some of the most innovative vessel designs against teams from around the world, and for the first time in the history of the Cup, the bulk of the equipment was moved across the country via freight train. Reportedly, organizers had considered loading up all the equipment and sending it via the Panama Canal to San Francisco where the America's Cup 2012-2013 World Series is set to get underway on August 21 but decided sending the containers and support equipment to the City by the Bay by rail was more cost effective and fuel efficient.

After finishing up the final event of the 2011-2012 World Tour in Newport, RI most of the yachts and support equipment made their way to Quonset, RI where they were loaded into containers, then placed onto COFC cars and assembled into a 1.5 mile long train by Seaview Transportation before being handed off to the Providence & Worcester on July 9th.

From there, the train was handed off to the New England Central where it made its way north through the western reaches of Masachusetts and New Hampshire before heading northwest through Vermont. The train- dubbed the America's Cup Express- was supposed to hand off its 121 car train to the Canadian National at St. Alban's, VT. However, the trip didn't go quite as smoothly as hoped.


It was supposed to be a 10-day trip until a container shifted Tuesday causing a one-day delay and then crew scheduling problems Wednesday led to a second day on a siding in New Hampshire. Thursday, it finally got underway again.

From St. Albans, the train continues to Montreal on the Canadian National before heading southwest to Chicago where the massive consist was handed off to the Union Pacific. The UP handled it the rest of the way to San Francisco, where it arrived on July 24th and was offloaded at Pier 80. 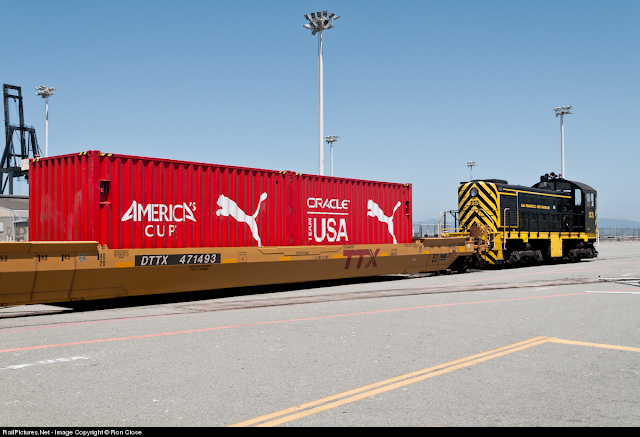 Despite the America's Cup Express setback in New Hampshire, those involved in the sails-on-rails move remained enthusiastic about the move.


“It is a great example of a freight train as an alternative to trucking if railroads cooperate,” Vermont Transportation Secretary Brian Searles said. “It is pretty exciting it is coming through Vermont,” he said, noting he hoped to be able to see it pass by Montpelier. Freight trains of more than 100 cars are pretty rare sights these days, he said.

The special freight train turned out to be the preferred option to not only trucking but the more likely option of chartering a freighter and sailing the load through the Panama Canal and up to San Francisco, explained Eric Moffett, president of Seaview Transportation Co. in North Kingston, R.I. Moffett worked with several railroads, including the New England Central Railroad, which runs through Vermont, to put together the travel package.

“It is exciting,” Moffett said, because the special train will show the competitiveness of rail transport to a world audience — the international teams associated with the America’s Cup

Moffett of Seaview Transportation likened the train to the circus trains of another era that contained everything the entertainers needed for their shows. The setup for each America’s Cup regatta includes machine shops, broadcasting facilities, and team gear tents, Moffett said.

Christopher Parker, executive director of the Vermont Rail Action Network, noted the importance of freight to the future of rail as well as roads in Vermont.

“While this is an unusual move, it illustrates how much of the freight in Vermont is moving through en-route to or from other parts of New England,” Parker said.

While in San Francisco, the America's Cup World Series will get underway the week of August 21st through the 26th and resume beginning the week of October 2nd. 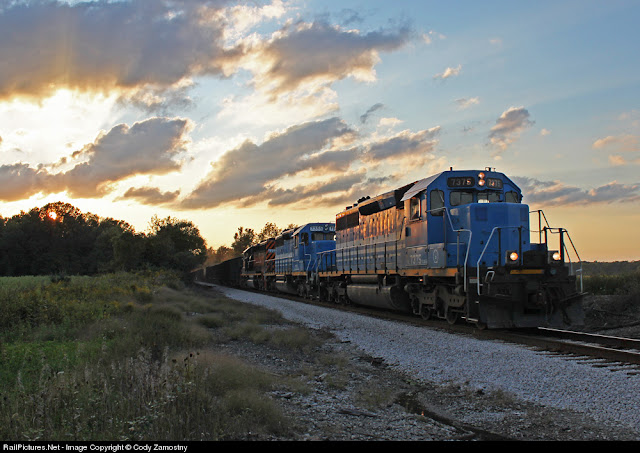 A trio of Wheeling & Lake Erie SD40-2s in charge of a stone train in Rochester, OH at sunset.Cody Zamostny photo

WHEELING & LAKE ERIE- Officials from the Wheeling & Lake Erie were on hand for the grand opening of a 10 acre National Lime and Stone site in Martins Ferry, OH that would see 60-car unit stone trains offloaded and used for construction and drilling pads for natural gas exploration in the nearby Utica and Marcellus Shales.


He said the operation begins when the limestone is mined, processed and crushed at Carey Quarry, which employs about 30 people.

The stone is loaded into 60-car unit trains. The Wheeling and Lake Erie Railroad transports trains to the Martins Ferry facility. It is unloaded at the site for use in various projects such as contractors, asphalt and concrete production, Ohio Department of Transportation projects, commercial and residential projects, the Utica Shale pads and roads and the general public.

[National Lime & Stone's] DiBerardino noted afterward that they have been in operation in the site for about a month. The company will hire several employees to manage the site and load and unload the stone.

In addition to hauling coal, grain, steel coils, salt, coke, lumber and scrap metal the W&LE has been kept busy hauling frac sand and pipe for natural gas drilling in the Marcellus and Utica shales.

The W&LE remains one of the relatively few independently operated regional railroads in the United States.
Posted by Fenway_Nation at 10:38 PM