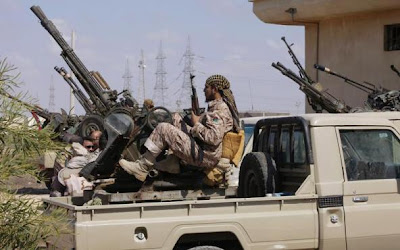 
Amid a wave of strikes, political assassinations and open insurrection from some of the Islamist groups that fought in Libya's 2011 Civil war Libya's nascent post-Ghdaffi government appears to be on the brink of losing any semblance of control on the country.

The murky security situation is threatening stability in a desert nation with North Africa’s largest oil reserves. And it is causing new jitters in a region already on edge over rising violence in neighboring Egypt and the looming prospect of U.S. military strikes in Syria.

As the postwar government struggles to rebuild after 42 years of dictatorship, it has left security primarily in the hands of hundreds of private militias, which are far larger and better armed than the country’s poorly trained and equipped police and army.

The militias, most of which were formed to oust Gaddafi in the 2011 revolution, range from ragtag outfits of a couple of dozen men to organized forces of thousands of fighters.

During the revolution, they sprang up in villages, towns and cities across this country of 6.4 million people. Mechanics, merchants and farmers formed militias based on family, tribal, neighborhood or religious ties. They took weapons from Gaddafi’s vast arsenals and became a wildly diverse network united only by the goal of removing Gaddafi.

After the dictator’s death in October 2011, many militia fighters — suddenly regarded as war heroes and liberators — never laid down their weapons.

Many still fight — with guns blazing — over long-standing rivalries. Some have morphed into criminal gangs, some are religious extremists. Many are a mix of everything — cops and robbers, patriots and jihadis — making it hard to identify which are helping Libya’s post-revolutionary transition and which are hindering it.


Human rights groups claim that more than 50 people- including judges and active members security forces- were killed in recent weeks and the new government's security forces are spread too thin and outgunned by most militia groups.


In the latest disruption, security guards re-imposed a strike they called off over the weekend, forcing the closure of Libya’s two main crude oil export terminals. Operations had resumed on Sunday at the ports of Es Sider and Ras Lanuf after a two-week stoppage. The two ports have a combined export capacity of around 600,000 barrels per day.

The work stoppage came just hours after gunmen wounded a guard and ransacked an oil service center Sunday evening in the eastern oasis town of Awjila. Libyan officials said they believe the attack was linked to competition between militia groups over oilfield contracts and the placement of their members in the newly created national Petroleum Facilities Guard, a force under the direct authority of the Defense Ministry, but made up largely of former militia members who have often fought among themselves.

Last week, Libyan Prime Minister Ali Zeidan warned of the economic consequences of the off-and-on disruption to oilfield, production and export terminals. He said oil exports had plunged by 70 percent – a devastating financial setback for Libya, which relies on oil exports for nearly all of its foreign revenues.

Oil industry officials said the export terminals at the Es Sider, Amna and Sirtica oilfields had already filled up their storage tanks to capacity and had to shut down production.

Libya's oil minister said Monday the government was working to end the disruptions by meeting with the protesters and appointing a new head of the Petroleum Facilities Guard -- but that appointment also appears to have enraged some of the strikers.


The crisis has caused Libya's oil output to fall to just 160,000 barrels a day- a figure that industry observers say is less than 15% of the nation's output prior to the 2011 civil war. Some striking workers reportedly attempted to sell quantities of stockpiled oil on the black market, but Libyan forces opened fire on a Liberian-flagged tanker as it approached the export terminal of Es Sider that was held by striking workers at the end of August.

In June, rights groups claimed that at least 28 people were killed after militiamen from the Libyan Shield Brigade in the eastern city of Benghazi opened fire on a crowd of protestors. The eastern city of Benghazi is Libya's second largest city and is better known as the cradle of the 2011 uprising that ultimate overthrow and execution of Libyan dictator Mummar Ghdaffi thanks in part to NATO airstrikes targeting Ghdaffi's military assets. However, amid a deteriorating security situation US Ambassador Chris Stephens was murdered in a terrorist attack at the American consulate in Benghazi on September 11, 2012 [despite the assailants using heavy weaponry and showing clear signs of prior coordination, the Obama Administration insisted for weeks that the Benghazi attack was a 'spontaneous demonstration' over an anti-Islamic You Tube video- NANESB!].
Posted by Fenway_Nation at 10:39 PM