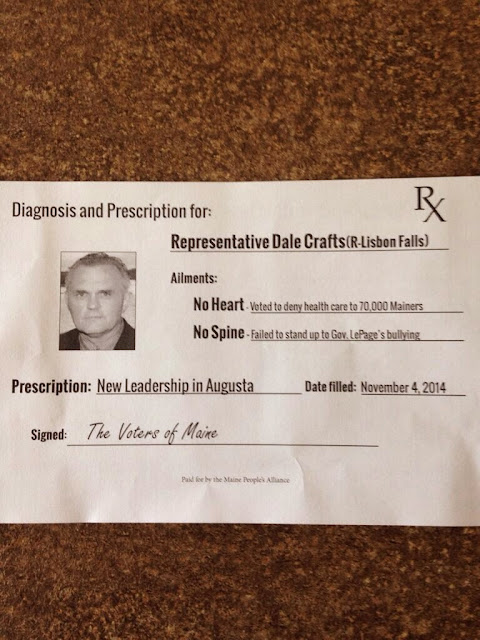 A left-wing Portland, ME advocacy group has sent out a mailer accusing state representative Dale Crafts [R- Lisbon Falls] of having 'no spine' and failing to 'stand up' to Gov Paul LePage's 'bullying'. Crafts, who also serves on the Lisbon, ME town council, is confined to a wheelchair.

The Maine's People Alliance mailer, which is done up like a mock prescription pad (shown above) was mailed throughout Craft's district in Androscoggin County just north of Portland.

“Maine has been down this road before, and we must learn from previous experience,” he wrote. “Medicaid spending grew by $1 billion in a decade, hospital bills were not being paid by the state, budgets were broken and thousands of elderly, and people with disabilities were forced to wait for critical services.

“For the sake of the truly needy and Maine taxpayers, we cannot go down this path again,”

Expansion of Medicaid for each state was considered a linchpin of 0bamacare. Under 0bamacare, the federal government would pay for any state that expanded Medicaid to anyone making less than 138% of the poverty level, but only through 2016.

State House minority leader Ken Fredette blasted the mailed and called for the MPA to publicly apologize. The communications director for Maine's People's Alliance said he has personally apologized to Rep Crafts via telephone but will continue to attack him over his support for LePage and opposition to proposed Medicaid expansion in Maine.

This would not be the first time in the 2014 election cycle that a liberal group has mocked a Republican with a disability. In January, undercover reported James O'Keefe videotaped Battleground Texas staff and supporters of Democrat gubernatorial candidate Wendy David mocking Texas attorney general Greg Abbot's disability
as well as forging signatures on resignation forms.
Posted by Fenway_Nation at 2:50 PM