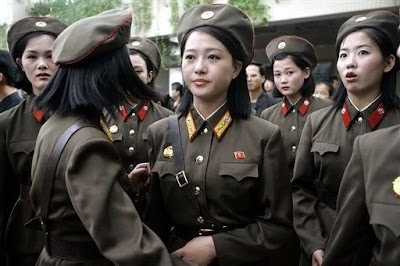 Not sufficiently weepy? Off to the labor camps with you!

Shortly after the death of North Korean leader Kim Il-Jung was announced last month, the regime-controlled media made it a point to broadcast video and images of grief-stricken mourners wailing in the streets of Pyongyang over Dear Leader's ascent to that worker's paradise in the sky.

For those of you unfamiliar with the North Korean regime, they control just about every aspect of life in the country and any large-scale event (i.e. parades or something called the Mass games) that takes place is typically very well choreographed. Lining people up on the streets of Pyongyang to wail in anguish on cue for cameras would be a fairly simple task given the ornate nature of some of the other events that have been choreographed.

There's a school of thought that the mourning was genuine either because the indoctrination has clearly taken hold or because those wailing the loudest had it pretty good under Kim Il Jong but could face an uncertain future under Kim Jong-Un, Kim Il Jong's heir apparent.

It's also worth noting that not only does North Korea's state-run media have zero connection to reality, they seem to do so with a melodramatic flourish when it comes to anything related to the regime and ruling party. That's not just this lackey lapdog of Yanqui imperialism speaking- check out these reports from the KCNA (North Korea's official media outlet) that Reuters thoughtfully passed along for us.

(Reuters) - The passing of North Korean strongman Kim Jong-il has been marked by plunging temperatures, mourning bears and now, according to North Korean state media, by flocks of magpies.

Kim, who died in December aged 69 years after 17 years running the world's most reclusive state, was reputed to be able to control the weather, as well as to have scored a miraculous 38 under par round of golf.

"At around 17:30 on December 19, 2011, hundreds of magpies appeared from nowhere and hovered over a statue of President Kim Il Sung on Changdok School campus in Mangyongdae District, clattering as if they were telling him the sad news," state news agency KCNA reported on Monday.

KCNA reported last week that a family of bears who usually hibernate through the fierce Korean winter had been seen lamenting Kim Jong-il's death.

"The bears, believed to be a mother and cubs, were staying on the road, crying woefully," it said

Now, reports are circulating that mourners in Pyongyang are being sentenced to several month stints in prison camps for not looking distraught enough on camera.

According to South Korea-based Daily NK, authorities have convened 'criticism sessions' with the aim of punishing those who skipped organized events during the mourning period or those who did but didn't cry or "seem genuine".

The informant from North Hamkyung Province told the website: 'The authorities are handing down at least six months in a labour-training camp to anybody who didn’t participate in the organised gatherings during the mourning period, or who did participate but didn’t cry and didn't seem genuine.'
The source claimed the criticism sessions created a 'vicious atmosphere of fear', which meant the new leader, Kim Jong-un, was being accused of preying on the people now that he has taken power.

It is unclear how many people face incarceration but the figure could be many thousands.

Shortly before the NKDaily reported the official 'criticism sessions' resulting in the incarceration of lackluster mourners, the regime announced a 'Benevolent' amnesty for convicted prisoners to commemorate the 100th birthday of Kim Il Sung. The announcement didn't clarify how many prisoners would be granted amnesty, although there is speculation that this might've been done to make room for the newly-sentenced North Koreans who were mourning insufficiently.
Posted by Fenway_Nation at 10:22 PM