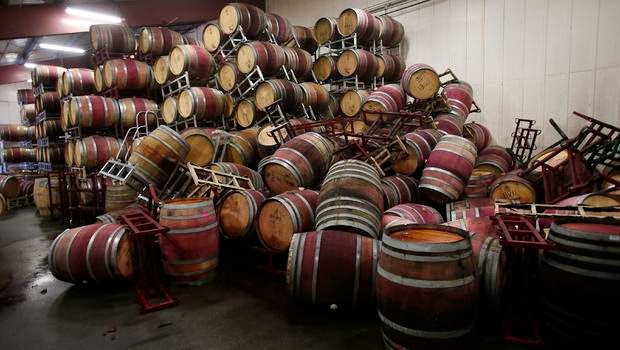 "Nooo! Not the wine! Anything but the wine"

The magnitude 6.0 quake, centered about four miles northwest of American Canyon, knocked out power to more than 60,000 people in Napa and Sonoma counties early Sunday and broke dozens of water mains that could leave 600 Napa homes without water for days, according to the city.

Across the region, the quake jolted residents out of bed, forcing some to flee through dark rooms littered with broken glass and displaced furniture. Others evacuated in the face of flames, with only seconds to grab pets, cellphones and other belongings.

Two people were critically injured, including 14-year-old Nicholas Dillon who was stabilized at the hospital’s triage center before he was flown to UC Davis Medical Center, spokeswoman Vanessa deGier said. The boy, who was in serious condition Sunday night, was injured when a brick fireplace collapsed on him, Napa city spokesman Barry Martin said.

The other seriously injured patient was an adult who suffered multiple fractures, deGier said.

The worst damage to buildings appeared to be in downtown Napa and surrounding areas. The quake dealt a significant blow to the city’s efforts to revive its core by renovating historic buildings, many dating to the late 1800s. Among those historic structures, the county’s old courthouse on Brown Street lost a large chunk of exterior masonry and was left with large cracks on the east side of the building.

Main Street’s Pfeiffer Building also suffered heavy damage with bricks falling off the facade, leaving a large pile of debris at its base that spilled onto the sidewalk.

The predawn quake came on a key day for summer tourism and events, including the IndyCar Grand Prix at Sonoma Raceway and the Santa Rosa Marathon, both of which continued as planned. It also hit in the middle of the region’s grape harvest, when wine tasting draws hundreds of visitors to area wineries and restaurants. The timing of Sunday’s quake, in the predawn hours, likely limited injuries to people who would otherwise have been going about their planned activities.

The California Highway Patrol reported that a number of highways in the Napa Valley were cracked and buckled, resulting in damage and flat tires to some of the vehicles travelling over the damaged roads.

This was reportedly them most powerful earthquake in northern California in more than 25 years- the fault thought to be responsible is the fairly obscure West Napa Fault, which didn't even show up in a 2008 State of California earthquake risk assessment.

Posted by Fenway_Nation at 4:10 PM