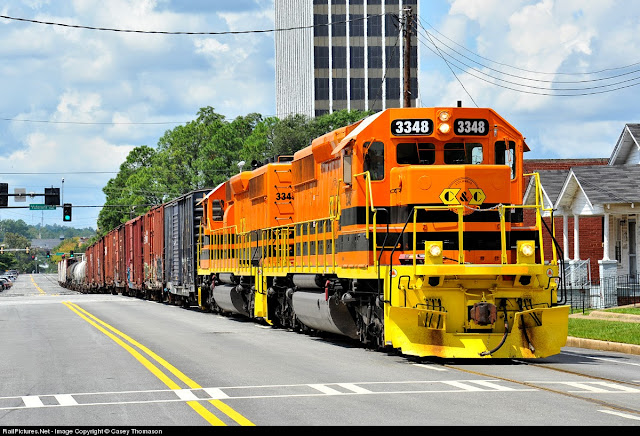 Today's Train of thought takes us to the Peach State and highlights what is sure to be a source of consternation for commuters in Georgia's second largest city and home to the US Army's Ft Benning.

The 26-mile Columbus and Chattahoochee is one of the newer railways in the Genesee & Wyoming family of shortlines and actually the second one to operating in the western Georgia city of Columbus. The line operates between Phenix City and Mahrt, AL was formed in 2012 but has trackage rights over a stretch of the former Central of Georgia line between Columbus, GA and Birmingham, AL to reach the Norfolk Southern yard in downtown Columbus.

To get the that NS yard, Columbus and Chattahoochee trains have to traverse the Chattahoochee River, which forms much of the boundary between Georgia and Alabama. Once across the river, trains for both the NS and Columbus & Chattahoochee have to traverse several blocks of street-running trackage on 9th street, sometimes snarling up traffic at rush hour in the heart of this city of more than 200,000.

Here, railpictures.net contributor Casey Thomason caught Columbus & Chattahoochee SD40-2 #3348 leading a consist on its way back to the NS yard after picking up loads from the paper mill in Mahrt, crossing the river and trundling down the middle of 9th street on September 7, 2012- just two months after the Columbus and Chattahoochee was formed.

According to the photographer, this was a relatively short train that only took up 2-3 blocks. Longer trains on the Norfolk Southern from Birmingham have to slow down for yard limits while westbound trains only gradually pick up speed, creating a rolling roadblock that leaves soldiers and civilians alike scrambling to fins an alternate route.
Posted by Fenway_Nation at 10:44 PM