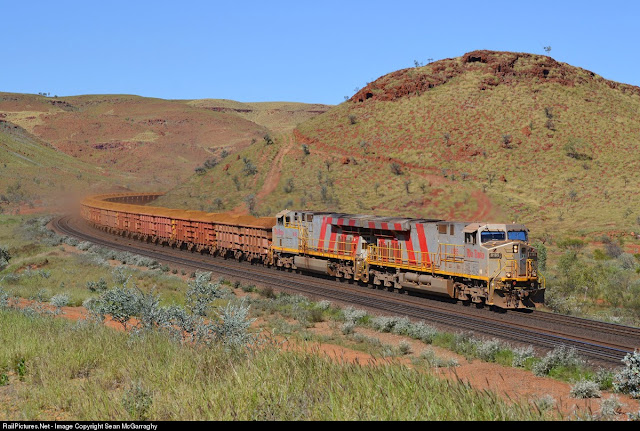 Today's Train of Thought takes us (where else?) Down Under to Australia.

While railways elsewhere in Australia were something of an amalgamation of different gauges and engineering techniques [that apparently weren't brought to a single national standard until the 1980s- NANESB!] the iron-ore railroads of Western Australia's Pilbarra region operate some of the biggest trains in the world in some of the most inhospitable terrain on earth.

One of the first iron-ore lines in northwestern Australia was the Hammersley Iron line between the port of Dampier and the then newly-opened Tom Price mine more than 300km inland back in 1966. Japanese manufacturers sought massive quantities of iron-ore from the Pilbarra region and in no time, 230+ car trains of iron ore began winding their way from mines in the unforgiving interior to waiting vessels in Dampier. To the east, a competing iron-ore railway called the Mount Newman Railway was under construction and by August 1969 saw the first iron-ore trains on its rails.

Much more recently, Fortescue Metals Group sought rail service their Cloud Break mine and Port Hedland some 250 miles away. Before spending more than A$2 billion on a mew line, Fortescue sought access to Cloud Break by way of obtaining trackage rights on BHP Billiton's Mt Newman line. However, that faced legal challenges and Fortescue ended up building their own iron-ore line to Port Hedland, with work completed by 2008.

Meanwhile, like railroads in the US, the other western Australia iron-ore rail lines were subject to mergers and consolidations [although unlike the boom and bust cycles in the USA, the Aussie lines have seen steady growth since opening up- NANESB!] and the original Hammersely iron line came under the control of multinational Rio Tino.

Here, railpictures.net contributor Sean McGarraghy caught Rio Tinto ES44AC #8185 on the point of a northbound ore train as it makes its way through Millstream-Chichester National Park on its way to Dampier on May 14th, 2014. These massive trains routinely exceed 230 cars and often require additional power in the middle of the train. 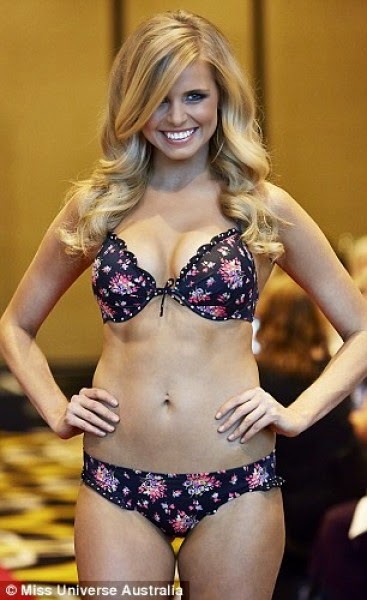 While on the subject of Australia, the Miss Universe pageant was on Sunday. While Miss Australia, Tegan Martin, made the final cut of 10, the grand prize was awarded to Miss Colombia.
Posted by Fenway_Nation at 11:04 PM