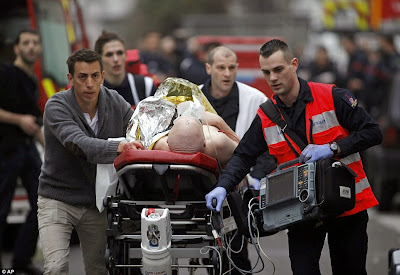 Editors of a popular French magazine and three local police officers were killed when masked gunmen stormed the offices of the satirical weekly Charlie Hebdo in Paris on Wednesday and opened fire. The magazine was firebombed a few years ago after they had published cartoon images of the Islamic prophet Mohammed and chief editor Stéphane Charbonnier was assigned a police bodyguard. Both Charbonnier and his police bodyguard were killed after shortly after the gunmen had forced their way into the building. Eyewitnesses and survivors said that the attack inside the Charlie Hebdo office lasted five minutes and that the three masked gunmen spoke French fluently but also called out "Allah Akhbar!". As local police responded to reports of gunfire in the area and the gunmen opened fire on two officers [both reportedly unarmed- NANESB!]- one of the attackers was videotaped walking up to a wounded policeman laying on the sidewalk and shooting him point blank before getting in a car and driving off with his accomplices. By Wednesday night, the youngest suspect in the attacks had turned himself in to authorities in suburban Paris.

The two suspects still at large have been identified as two brothers- Said Kourachi, 34, and his younger brother Cherif Kourachi, 32. Both suspects were known to both US and French officials- both of them were placed on Homeland Security's No-Fly list while Cherif was jailed for 18 months for attempting travel to Syria in order to aid Islamist fighters fighting US troops in Iraq. More recently, both brothers are said to have travelled to Yemen in 2011 and received training with Al Qaeda affiliates in the southern end of the Arabian Peninsula.

Posted by Fenway_Nation at 8:26 PM