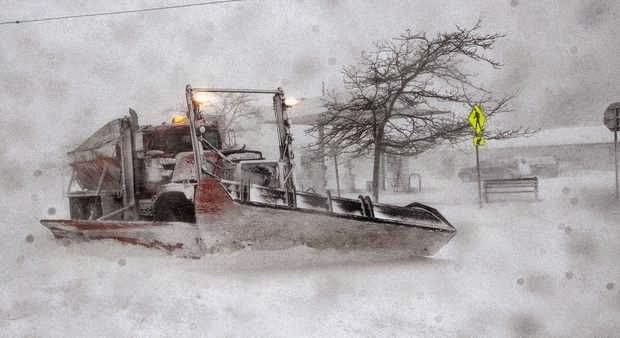 Winter storm warnings and travel advisories are in effect for much of the Northeast from West Virginia to Maine and Canadian Maritime Provinces as a massive winter storm [named Juno- how long have they been naming winter storms? Seems like a recent phenomenon- NANESB!] bears down on the region.

While cities like New York and Boston could get as much as 2 feet from winter storm Juno, outlying and mountainous areas could be getting as much as three feet overnight. Airlines and commuter agencies are suspending service ahead of Juno's arrival while state, municipal and county officials are prepping sand and salt trucks to deal with the snowfall.

The governors of Massachusetts and Connecticut have issued travel bans for their respective highways that will go into effect on Monday night. In Boston, Logan airport, the MBTA and state offices will be closed on Tuesday. Newly sworn-in governor Charlie Baker of Massachusetts also cautioned that some areas could expect power outages because of the wet heavy snow.

Airports from New England to Washington DC cancelled more than 5000 flights on Monday, with most of the cancellations around the New York-area airports like Newark-Liberty, La Guardia and JFK. Amtrak announced there were no cancellations as of Monday, but would be re-evaluating throughout the day and running a modified schedule starting Tuesday.