Horror in Connecticut as Gunman Murders 26, Including 20 Elementary School Students

Wow- "This is just awful" would be an understatement. Ordinarilly I scoff at such things, but after today I wonder if the Mayans had it right all along and everything is coming to an end shortly. I cannot fathom the mind of somebody twisted enough to even contemplate this, let alone actually carry it out. That said, I'm not giving the perpetrator a pass by claiming he was mentally derelict or anything along those lines. 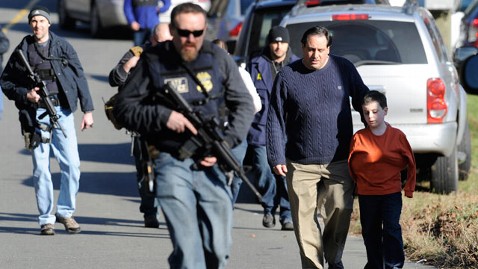 A gunman identified as 20 year old Adam Lanza shot and killed his mother in their Newtown, CT home before driving to Sandy Hook Elementary school where she taught, murdering her entire class as well as members of the school staff.


The shooter, who sources identified as Adam Lanza, 20, shot his mother, Nancy Lanza, in the face at their home in Newtown, Conn., then went to nearby Sandy Hook Elementary School where she taught and gunned down her entire class, according to sources. Lanza was found dead inside the school, according to officials. Eighteen of the children and six more adults were dead at the school and two more children died later, according to Connecticut State Police Lt. Paul Vance.

Vance would not confirm the shooter's name, and earlier in the day there were conflicting reports over the gunman's identity. Law enforcement sources told FoxNews.com the shooter was Adam Lanza. His brother, Ryan Lanza, 24, who was widely and erroneously reported to be the suspect, was questioned in Hoboken, N.J., but authorities said he was not involved. An FBI source tells Fox News that Ryan Lanza and the father, Peter Lanza, have both been cleared and are not longer being questioned.

"It is not a simplistic scene," Vance told reporters.

The guns used in the are said to have belonged to Nancy Lanza and reportedly include an AR-15 type semiautomatic rifle as well as two 9mm handguns- a Glock and a SigSauer. Although the media has said the horror in Newtown is sure to re-ignite the gun control debate, gun control groups say that Connecticut has some of the strictest gun control laws in the nation. The guns used in the massacre were said to have been legally obtained by Lanza's mother. Such laws did nothing to prevent an August 2010 mass killing when a recently fired worker at a Hartford beer distributor's warehouse returned and shot 8 of his former co-workers to death before shooting himself. 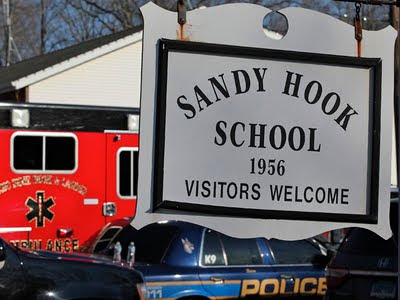 Early on, there were a number of conflicting reports regarding the shooting. Initially the shooter was identified as Ryan Lanza of Hoboken, NJ- Adam's older brother. Later, there were conflicing reports of possible accomplices and whether or not the AR-15 recovered at the scene had even been fired.

According to news reports, Lanza showed up at the main office wearing black garb and carrying three weapons and shot the principal with the entire school listening on in horror over the school intercom system. Some teachers attempted to shield their sudents from the homicidal gunman during his rampage. Telling her young pupils the gunshots they heard was hammering, one teacher ushered her students into the school's bathroom. Other teachers were able to lock the doors to their classrooms.

Authorities are witholding the names of the victims until all of the victim's families are notified.
Posted by Fenway_Nation at 11:05 PM