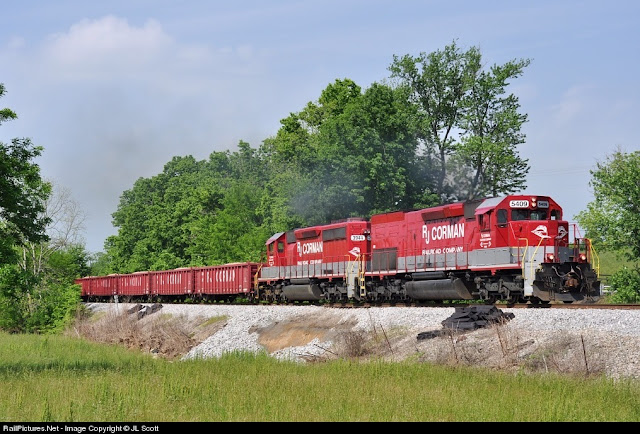 Today's Train of Thought takes us to the Bluegrass state and provides us a glimpse of the late RJ Corman's impeccably-run Central Kentucky Lines.

Sand vacuumed up from the bed of the Ohio River is loaded into a fleet of RJ Corman's impeccably maintained fleet of red gondola cars by Louisville, KY based Nugent sand for the relatively short 80 mile trip to Nugent Sand's Lexington, KY facility.

The short trip, which was profiled in a 2011 Lexington Herald-Leader article about RJ Corman's railroad enterprises, takes an estimated 17,400 trucks of the road between Louisville and Lexington each year. Since 2005- just two years after RJ Corman's Central Kentucky Lines took over operations of the former Louisville & Nashville line between Lexington and Louisville- anywhere from 400,000 to 600,000 tons of sand have been moved over the line with each car carrying roughly 125 tons.