Breitbart was walking near his house in the Brentwood neighborhood shortly after midnight Thursday when he collapsed, his father-in-law Orson Bean said.

Someone saw him fall and called paramedics, who tried to revive him. They rushed him to the emergency room at UCLA Medical Center, Bean said. Breitbart had suffered heart problems a year earlier, but Bean said he could not pinpoint what happened.

Breitbart was a prolific commentator who founded several websites devoted to covering politics, entertainment and everything in-between. Earlier in his career, he worked for the Drudge Report before breaking off to start his own outlets -- including Big Government, Big Hollywood and Breitbart.tv.

Perhaps Breitbart's best known for upstaging Congressman Anthony Weiner's press conference in June 2011 and demanding an apology from the Congressman shortly before the Brooklyn Democrat adressed the media, confessing to sending sexually explicit mesages via Twitter from his office and fabricating a story about his account being hacked. Weiner would resign within a few weeks and his heavily Democrat district went to Republican Bob Turner in a September 2011 special election. 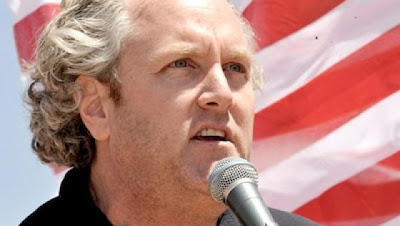 Breitbart was also a prolific user of Twitter- sometimes retweeting hate-mail and death threats as often as he used the social network to promote the newest articles on his own 'Big' websites. Unsuprisingly, the hate-tweets directed at him continued when news of his death broke.

While not as big a follower of the Breitbart family of websites as other bloggers, I actually did hear a live interview with him on the Hugh Hewitt radio show what turned out to be a few hours before his death. Besides fielding questions about an ongoing dispute between him and Current TV's Keith Olberman and Simon Schuster, Breitbart also defended his taste for early 80's alternative music when pressed by the host.

Breitbart typically displays the following quote on his 'Big' websites.

"I love my job. I love fighting for what I believe in. I love having fun while doing it. I love reporting stories that the Complex refuses to report. I love fighting back, I love finding allies, and -- famously -- I enjoy making enemies. Three years ago, I was mostly a behind-the-scenes guy who linked to stuff on a very popular website. I always wondered what it would be like to enter the public realm to fight for what I believe in. I've lost friends, perhaps dozens. But I've gained hundreds, thousands -- who knows? -- of allies. At the end of the day, I can look at myself in the mirror, and I sleep very well at night,"