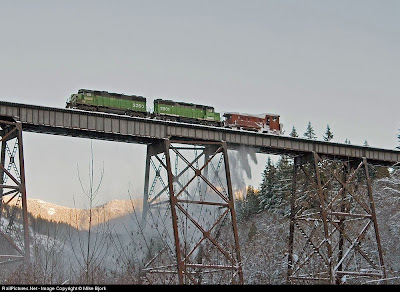 Today's Train of Thought takes us to Washington State and a portion of the former Northern Pacific once deemed redundant and mothballed.

Completed in the late 1880s, the Northern Pacific line through Stampede Pass was pivotal for the railway to compete with other lines serving the fledgling timber town and seaport of Seattle. While some lines had opted for the less topgraphically punishing route along the Columbia River before making the (relatively) short trip up north from Portland, OR or Vancouver, WA, one of Northern Pacific's competitors- the Great Northern- was working on a line through Stevens Pass.

Both the Great Northern and Northern Pacific lines through the Cascade range east of Seattle were fraught with numerous, time-consuming switchbacks- Northern Pacific could reportedly only run 5 cars at a time over the Stampede pass line when it first opened. Both lines would resort to drilling tunnels under the mountain ranges.

The Northern Paficic's Stampede Pass Tunnel would weigh in at just under a mile, and ironically, would be considered redundant a little over a decade after the Northern Pacific and Great Northern merged (along with the Chicago, Burlington & Quincy and Spokane, Portland & Seattle) in 1970 to form the Burlington Northern.

By the mid-1980s, the line through Stampede Pass was mothballed and the Burlington Northern track east of the pass and in the Yakima area was sold off to the Washington Central shortline. However, by the early 1990s, congestion problems at Stevens pass were becoming apparent and by the time the Burlington Northern's merger with the Santa Fe was complete, the Stampede Pass line was reopened and the BNSF purchased the former Northern Pacific track back from Washington Central.

While this did alleviate much of the congestion on both the Columbia River lines and Stevens Pass Route, a new problem arose a few years after the Stampede Pass line reopened. The tunnels and snowsheds were too low to accomodate double-stacked containers. Instead, the line primarily handles unit coal and grain trains as well as general merchandise freights.

Of course, even if it can't handle double-stack containers, one still needs to keep the line clear of snow and obstructions. Here, railpictures.net contributor Mike Bjork caught BNSF GP39-2 #2901 and GP38 #2260 with rotary snowplow #972811 making its way across the high trestle at Stampede, WA on the final day of 2007. A month later, the plow would be involved in a derailment at East Auburn, WA.
Posted by Fenway_Nation at 11:20 PM