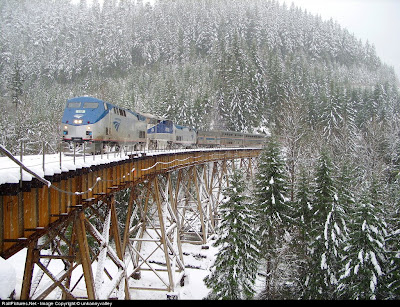 Despite the name of Amtrak's marquee west coast train, today's Train of Thought actually takes us a little further inland in Southern Oregon. The name Coast Starlight is actually a combination of two Southern Pacific trains that once plied the California section of the route- the Coast Daylight and the Starlight. It's also worth noting that once north of San Luis Obispo, CA, the route is pretty much inland until it makes its way up to Olympia, WA and the southern reaches of Puget Sound- although it does run parallel to some bays and inlets between Oakland, CA and Sacramento, CA.

The big draw for many of the passengers is the dramatic coastal scenerey between Ventura, CA and San Luis Obispo as the track clings to cliffs over the Pacific Ocean and soars across high metal trestles- complete with a lounge car for passengers to enjoy the view.

Between Portland, OR and Sacramento, CA riders are treated to numerous views of the mountains and forests of northern California and western Oregon. Between Eugene, OR and Dunsmuir, CA the line traverses the former Southern Pacific Cascade Division and Black Butte Division, although the train often runs late enough to traverse that section of the route after dark.

Here, however, railpictures.net contributor Judkins645 managed to catch southbound train 14 (Amtrak and Union Pacific's designation for the Seattle-Los Angeles run of the Coast Starlight) charging up the 1.7% grade at Oakridge, OR on a snowy December 28, 2007. Amtrak GE P42DC #115 is in charge as it brings the southbound Coast Starlight across the 515-foot Salt Creek trestle- the longest on the Cascade division, according to Judkins645.

Bracketed by two big GE's is an Amtrak EMD F59PHI in the blue and silver Amtrak Surfliner paint scheme- the EMD normally sees service between San Diego and San Luis Obispo, CA but was likely pressed into service elsewhere due to increased ridership around the holidays (although the day after Thanksgiving usually remains Amtrak's single busiest day). The train shown here is running two hours late- a problem plaguing that particular route since the late 1990s- but Amtrak has reportedly addressed that and the Coast Starlight enjoyed an on time arrival rate of 86% since 2008
Posted by Fenway_Nation at 2:29 PM