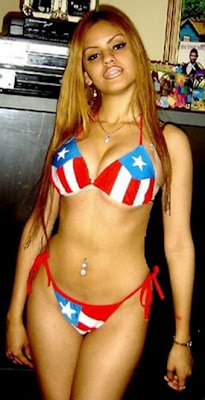 Neither enjoying the benefits of full fledged independence nor U.S. statehood since Spain ceded it to the USA in 1898 after the Spanish-American war, the commonwealth of Puerto Rico is classified as an unincorporated territory of the United States. Thanks to the Jones-Shafroth Act of 1917 residents of Puerto Rico were automatically given US citizenship. Migration to the US Mainland increased during WWII when factories producing war materiel needed manpower with most of the American men in the workforce now drafted into military service. The advent of commercial air travel made it easier for Puerto Ricans to travel to the continental US and back.

Interestingly, while the date of New York's Puerto Rican Day parade falls on the 2nd Sunday in June each year, it is not a holiday in Puerto Rico. 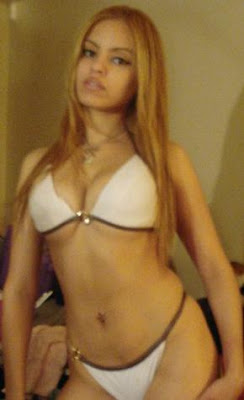 No word on whether or not 23-year old Puertoriqueña Melody Morales will be in attendence this year. In 2009, the buxom latina filed suit against the now-closed Hawaiian Tropic zone in New York's Times Square claiming she was discriminated against on the basis of her accent, which the manager considered 'too ghetto'. In it's defense, Hawaiian Tropic Zone had pointed out that they had employees from Puerto Rico, Russia and Nigeria at the time Ms. Morales sued them [this could very well be an instance 'Fran Drescher Syndrome'- i.e. an attractive woman with a voice like nails on a chalkboard- NANESB!].

While the ultimate disposition of the lawsuit remains unknown by yours truly, the curvy latina attracted the attention of Rick's Cabaret [NASDAQ: RICK] and local businesses within weeks of the lawsuit, who approached Morales' lawyer with a number of job offers.

Since I can't seem to find any video that clearly has her voice, I figure the best I can do is offer these photos of Ms. Morales that were circulating at the time of the lawsuit, including Melody's very admirable display of the Puerto Rican flag.
Posted by Fenway_Nation at 1:31 AM