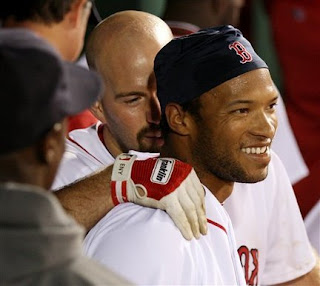 RED SOX: Well, after yesterday's embarrassing loss to Tampa Bay in the Patriot's Day game, one would think it couldn't get much worse. I mean, it's not as though the Sox would give up almost as many stolen bases as they had in the 4-game sweep at the hands of Tampa Bay in one game against the Rangers in Tuesday night's opening game of the series at Fenway.

From the looks of it, I'd say everybody's pretty much figured out Wakefield's knuckelball except Victor Martinez. The Rangers Nelson Cruz and Elvis Andrus combined for one-third of the Rangers nine stolen bases- a club record for Texas and Boston. All nine bases were swiped with Wakefield on the mound and Martinez behind the plate.

Believe it or not, it got better.....and I'm not even being sarcastic here. It was a 2-run game when Manny Del Carmen came on the relive the knuckleballer Wakefield in the top of the 7th. After giving up two fly balls, a walk and a strikeout to keep it a 6-4 game in the 7th Del Carmen started off the top of the 8th with the same score, Varitek behind the plate and getting the first two batters to ground out. Del Carmen walked Andrus and Hideki Okajima came on to relieve him only to give up a single and a walk to load the bases before getting Vlad Guererro to pop out and end the inning.


Varitek would hit a leadoff double to start the bottom of the 8th and one Pawtucket call up would replace another when Darnell McDonald would pinch-hit for Josh Reddick (who went 1 for 3 with 2 RBI for the evening). Now, I'd like to think that I'm reasonably up on who's in the pipeline over in Pawtucket.....but if I told you that I had heard of Darnell McDonald before, I would basically be lying my ass off. McDonald signed a minor-league deal with Boston in December 2009 and has been hitting .341 with 2 HR and 8 RBI in AAA Pawtucket.


Papelbon would come on to relieve Okajima in the top of the 9th and not allow a run before the Rangers' Frank Francisco managed to load the bases in the bottom of the 9th after Youkilis' leadoff single and two intentional walks (one to Mike Lowell and another to 'Tek). And with two out and the bases loaded in a tie game in the bottom of the 9th, who should appear? None other than this Darnell McDonald chap, who had earlier demonstrated himself to be quite the capable hitter. Just in case the game-tying 2-run homer wasn't enough to leave an impression, how about a walk-off grand slam?


Ha ha....just kidding. But how about a walkoff 2-out bases-loaded RBI wall-ball in the bottom of the 9th? That's pretty good in that it hits the wall and makes some noise, and when all is said and done, the end result is the same as a grand slam. I'll take it, and I imagine McDonald will take it as well. Congratulations and welcome to Boston, Darnell McDonald!


Other Sox-Centric News: Mike Cameron and Jacoby Ellsbury have been placed on the 15-day DL, which is what prompted Reddick and McDonald's call-up from Pawtucket in the first place. Cameron was a late scratch from the lineup in the Patriot's Day game against Tampa Bay and was placed on the DL retroactive to April 19.


Other MLB News: Colorado Rockies owner Keli McGregor was found dead in his Salt Lake City hotel room Tuesday. Salt Lake City police say that two of McGregor's associates were unable to get in touch with him and somebody entered the room and found the 48-year old McGregor unconscious at around 9AM Mountain time this morning. Detectives say there are no initial signs of forced entry or foul play. 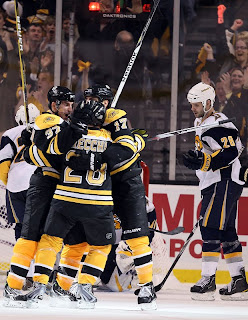 NHL: The Bruins opened up the home portion of their series against the Buffalo Sabres in the first round of the Stanley Cup Playoffs with a 2-1 win over the Buffalo Sabres on Monday night. Buffalo would score early, but not often when a Mike Grier goal put Buffalo up with just under 7 minutes into the first period. Dennis Wideman would get one past Ryan Miller to deadlock the contest at 1-1.

The deadlock would not be broken until just over 7 minutes remaining in the game when Patrice Bergeron got a quick shot off from the right circle that would beat Ryan Miller. The Bruins would hold off a late flurry by the Sabres when they pulled Miller for the extra attacker. No empty-net goal this time around, but they did manage to get the faceoff in the Buffalo end and kill off the clock from there. Tukka Rask stopped 32 of 33 shots while Ryan Miller stopped 27 of 29 shots faced. The shot totals for Boston in the last 2 games combines for 59 shots on goal.

It's worth noting that the Sabres are without the services of their regular season scoring leader Thomas Vanek (28 goals, 25 assists) who is listed as day-to-day with an injured foot. LW Jochen Hecht, who had 21 goals and 21 assists for Buffalo this season is expected to be out for at least 2 weeks after having surgery on one of his fingers. Sabres RW Drew Stafford also made an appearance, playing for the first time since suffering a concussion on April 10.

As for Boston, there's been a Marc Savard sighting! Savard skated for about half an hour Monday. He could be medically cleared to play this week, although he wouldn't likely start playing unless Boston advances to the second round.

The two teams will go at it again tomorrow night from the Garden.

NBA: Game 2 of the 1st round of the NBA playoffs had to start without Kevin Garnett thanks to Saturday night's shenanigans. Miami at one point actually had the lead, 29-25, after a Jermaine O'Neal dunk, but Boston would go on a 44-8 run over the next 16 and a half minutes of playing time to take a 69-37 lead. Garnett wasn't allowed in the Garden but appeared on a pre-recorded message on the scoreboard during a timeout late in the first half.