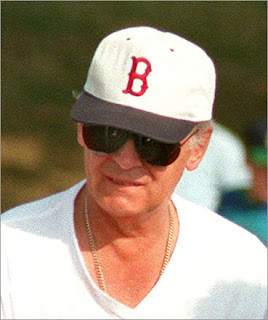 Police and FBI agents visited the two largest bookstores in Victoria, British Columbia to circulate posters with a picture of #4 on the FBI's Ten Most Wanted List, former Winter Hill Gang leader, current fugitive Southie and octogenarian James 'Whitey' Bulger. There are warrants out for Bulger's arrest on charges of money laundering, extortion, racketeering, drug trafficking and at least 19 counts of murder between the early 1970s to mid 1980s. Law enforcement is focusing on bookstores in the area because the fugitive Bulger is reportedly a history buff.

Bulger continued his criminal activities while being recruited as an FBI informant in the early 1970s. Agents in the Boston office of the FBI willingly overlooked Bulger's ongoing criminal activites with the Winter Hill gang- up to and including murder- in exchange for information from Bulger about the rival Providence, RI-based Patriarca crime family's operations.

Tipped off by then-FBI agent John Connolly about sealed indictments from the Justice Department prior to Christmas 1994, Bulger went on the run. In 1999, he was placed on the FBI's 10 Most Wanted List and subject to an Interpol 'Red Notice' (immediate extradition requested) in 2007. The last credible sighting of Bulger was in 2002 in London, England by a British businessman who recognized him after meeting Bulger at a hotel gym in the early 1990s.
Bulger's younger brother William would go on to be a Massachusetts state senator and University of Massachusetts President, although he would resign from the latter position after testifying that, while president of the Massachusetts State Senate, he went to a pre-arranged location to avoid electroinic survaillence and wiretapping while taking a phone call from his fugitive brother.