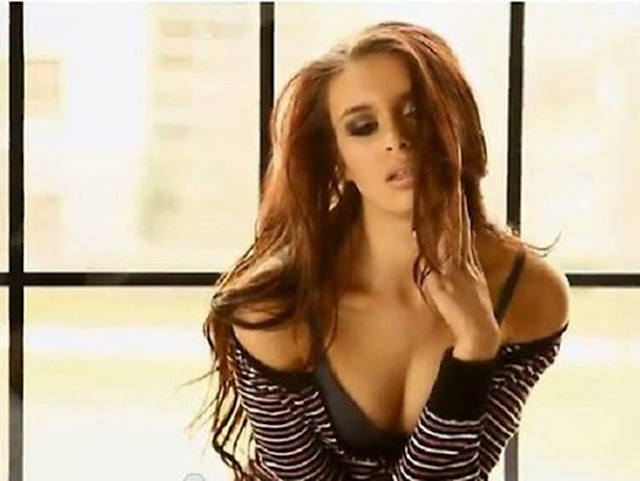 And just like that, there's one less hot Spanish teacher in the Lone Star State.

First year Spanish teacher Cristy Nicole DeWeese was fired by the Dallas Independent School District earlier this month due to her 2011 appearance as 'Coed of the Month' in Playboy magazine- a publication I'm told attempts to trick buyers into reading pretentious Gore Vidal articles by surrounding them with pictures of naked or near-naked women.

Deweese had apparently just turned 18 when she posed nude for the illustrious men’s magazine. She was not employed by the Dallas Independent School District at the time.

In Playboy’s online videos and photos, Deweese goes by the much sexier name, Cristy Nicole.

In a YouTube clip entitled “Coed Cristy Nicole is One Sexy Hunter,” Deweese can be seen modeling in striped pajamas and lingerie for Playboy. She spends much of the clip chatting with people behind the scenes.

She says hunting is one of her hobbies. She talks about her career goals—even then, at just 18, she knew she wanted to be a Spanish teacher.

Deweese spends much of the clip discussing a bag of beef jerky she brought to snack on during her Playboy modeling shoot.

At least one parent had suggested that Deweese’s presence in front of a classroom was a distraction for students. The parent also charged that students were checking out Deweese’s video and photos on campus.

Students seemed less concerned—at least the ones chirping on the web. Many of them posted comments under Deweese’s Playboy video on YouTube.

Other students took to Twitter to defend Deweese and tell critics to stop bothering her. At least one student started a petition in an effort to save the embattled first-year teacher’s job.


While Deweese's photos are much racier than that of fired Florida educator Olivia Sprauer, the end result is the same. Deweese is reportedly looking to resume her modeling career if she's unable to continue teaching [on that note, if the Dallas Independent School District would like to retain my services in performing due diligence to make certain recently hired employees aren't former adult film stars or centerfolds, contact me via this blog; there is the matter of my sizeable fee for services rendered- NANESB!]. Still, credit should be given to Deweese for not sleeping with any of her students, which is more than some school districts can say.

Deweese's firing occurred just a month into the school year, leaving the district scrambling to find a substitute Spanish teacher on short notice. They were able to find a replacement from nearby Arlen, TX. However, her hiring is considered a stopgap measure....

Sad to say, I never had the sultry Selma Hayek or Sofia Vergara-lookalike latina Spanish teacher that's the subject of pretty much every schoolboy fantasy to the point of being cliche. I did take a semester of Russian, and while our teacher was a brusque, dour woman from the Old Country, she had to leave about a week into the semester due to some sort of family emergency back in Russia. Our substitute turned out to be a drop-dead gorgeous, bubbly, statuesque blonde from Poland who showed up for the first day in high heels and a tight little floral print sundress. Очень хорошо!
Posted by Fenway_Nation at 11:23 PM