My understanding is that there's been some football games of significance taking place lately- I'll get caught up on that as best I can, but for now here's some of what's happening with the non-pigskin sports. 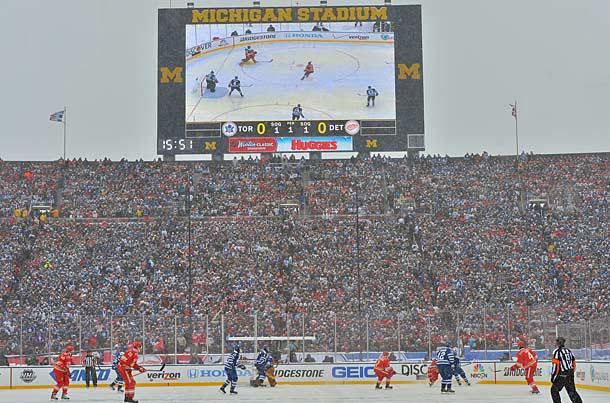 NHL- As much as I'm not a fan of either team involved, I gotta say that the 2014 Winter Classic went off without a hitch.

Before a crowd of 105,491 at the University of Michigan's Big House in Ann Arbor, the 'home' Red Wings faced off against the Toronto Maple Leafs, kicking off 2014 with an Original 6 matchup.

After a scoreless first period, former Senator Daniel Alfredsson put Detroit on the board first with a goal about midway through the second period before Toronto's James van Reimsdyk got the equalizer for the Leafs in the dying seconds of the 2nd.

Less than 5 minutes into the 3rd, the Leafs took their first lead of the day on a Tyler Bozak goal to put Toronto up 2-1. With less than five minutes to go, the 'home' team got the equalizer in the form of a goal from Justin Abdelkader to knot things up at 2-2. With nothing resolved late in regulation or in OT, the Winter classic headed for a shootout for the second time in its history.

Pavel Datsuk got the first shootout goal of the game for Detroit, but Joffery Lupul and Tyler Bozak would get back to back goals for the Toronto shootout win. Toronto's Jonathan Bernier stopped 41 of 43 shots faced in regulation and OT while the Wing's Jimmy Howard faced 26 shots on goal and successfully turned aside 24 of them.

This game was actually slated to take place on New Year's Day 2013, but was cancelled due to the lockout and abbreviated season. Interestingly, this will be the first of many outdoor games scheduled for the 2013-2014 season.

In a move that was likely designed to offset the loss of the 2013 Winter Classic, there are at least five more games in four more venues scheduled this season in what's been dubbed the NHL Stadium Series. On January 25th, the LA Kings and Anaheim Ducks will face off in Dodger Stadium. The following day, on the other side of the country the New York Rangers will host the New Jersey Devils at Yankee Stadium. Three days later, hockey returns to Yankee Stadium when the Rangers and Islanders go head-to-head. On March 1st, the Stadium Series resumes at Chicago's Soldier Field when the defending Stanley Cup champion Blackhawks will take on the Pittsburgh Penguins. The NHL's stadium series is slated to wrap up the following day north of the border in Vancouver when the Canucks will host the Ottawa Senators at the BC Palace in the 2014 Tim Horton's Heritage Classic.

As for the New Year's Day Winter Classic, the Washington Capitals are slated to host the game next year, although a venue or opponent haven't been formally announced. There has also been speculation since the inaugural 2008 Winter Classic that Beaver Stadium on the Penn State campus in State College, PA would host an outdoor matchup between Pennsylvania's two NHL franchises- the stadium boasts an even larger seating capacity than Michigan's Big House and is roughly halfway between Pittsburgh and Philadelphia.

ELSEWHERE IN THE NHL- Meanwhile, the Boston Bruins are getting off on the right foot for 2014. After a 3-2 win against Nashville at home the day after the Winter Classic, the Bruins hosted the Winnipeg Jets on Saturday.

Although the Jets got on the board first thanks to a Dustin Byfuglien goal midway through the first, Danny Paille tied it up at 1-1 with a tally for the B's less than 3 minutes later.

The second period was all Torey Krug as he scored two goals a little over four minutes apart for what would turn out to be the game-winner, putting Boston up 3-1. In the 3rd, Reilly Smith would add to Boston's total midway through the period making it a 4-1 game....which would also be the final. Tukka Rask turned aside 35 of 36 shots faced and the Bruins are now in sole possession of first place in the Atlantic division.

The Bruins will hit the road and next play on the west coast on Tuesday night when they take on the Anaheim Ducks- a team that has yet to lose at home in regulation this season- from the Honda Center in Orange County, CA. This one is a pretty late start at 10:00 PM ET and it will be televised on NESN.

NCAA HOCKEY- Ann Arbor's Big House wasn't the only outdoor hockey venue this week. With an outdoor rink set up at Fenway, America's Favorite Ballpark hosted an NCAA Hockey doubleheader over the weekend.

After a 1-1 tie between Providence College and Merrimack, #6 Boston College and #14 Notre Dame took to the ice for the Holy War (on skates!). The Eagles jumped out to a quick 2-0 lead thanks to goals from Brendan Silk and Johnny Guardeau before Mario Luca scored late for the Irish to cut the lead to 2-1.

The Irish tied it up early in the second with a power play goal from TJ Tynan- the only scoring that would take place in the second period. In the 3rd, the re-took the lead on a shorthanded goal from Bill Arnold, but less than 3 minutes later, the Irish's Bryan Rust tied it back up at 3-3.

Less than a minute later, Johnny Guardeau got his second goal of the night and Eagles netminder Brian Billett would hold off a furious late surge by the Irish for the 4-3 win.

Saturday's game is actually the first of two NCAA Doubleheaders at Fenway- UMass Lowell is slated to take on Northeastern on the afternoon of Jan 11th while Maine will take on the BU Terriers that evening. 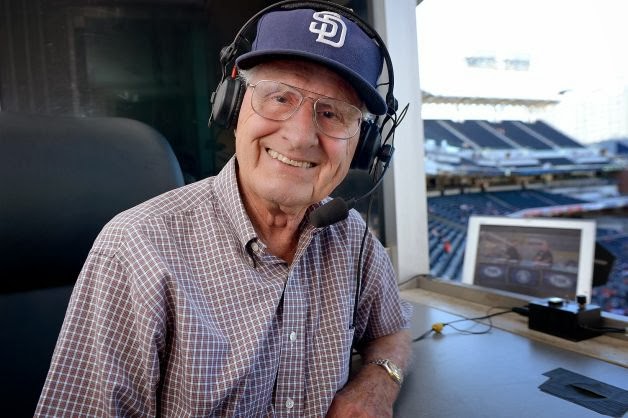 MLB- Former Yankees 2nd baseman, WWII Marine fighter pilot and Hall of Fame Broadcaster Jerry Coleman passed away at a California hospital on Sunday at the age of 89. A California native, Coleman reported to the Yankees minor league affiliate in Wellsville, NY after graduating high school at the age of 17. At age 18, he joined the Marine Corps and was flying Dauntless SBD dive bombers on missions in the pacific theater in WWII.

After World War II, Coleman made his major league debut with the Yankees in 1949 and was named the AP's Rookie of the Year that season. Starting in 1951, Coleman missed the bulk of two seasons serving in the Korean war where he served alongside Ted Williams. Coleman, the only big-leaguer to fly combat missions in WWII and Korea [Williams served as a flight instructor during WWII- NANESB!] recounted a harrowing close call Ted Williams had, crash landing after returning from a mission over North Korea.

After returning to the Yankees, Coleman was beset by vision problems and broke his collarbone in 1955. His last season with the Yankees was in 1957, when the Bronx Bombers lost to the Milwaukee Braves in seven games in the World Series. After retiring as a player, Coleman worked in the front office for awhile before making his way to the broadcast booth.

In 1970, Coleman returned to California and broadcast games for the then-California Angels for two seasons. By 1972, Jerry made his way down Interstate 5 to San Diego and would work in their broadcast booth for the San Diego Padres every year except for 1980- which marked an uneventful stint as the Padres manager. The following season, he returned to the broadcast booth and remained there through the 2013 season, earning the Baseball Hall of Fame's Ford C Frick award in 2005.

The veteran broadcaster was known for peppering his play by play with phrases such as "Oh doctor!" and "You can hang a star on that one!" after a particularly impressive play as well as frequent malapropisms. In recent years, Coleman was working a reduced schedule, covering select daytime home games and doing pregame interviews with Padres manager Bud Black.

Coleman was admitted to a San Diego-area hospital around Christmastime with cerebral hemorrhaging and his condition had worsened over the next several days.

Prior to his being hospitalized, Coleman appeared in a video message filmed in front of the USS Midway  museum for Veteran's Day that was released by the San Diego Padres. Coleman is also one of only two people the Padres organization erected statues at PetCo Park to honor- the other being Hall of Fame outfielder Tony Gwynn.
Posted by Fenway_Nation at 11:02 PM