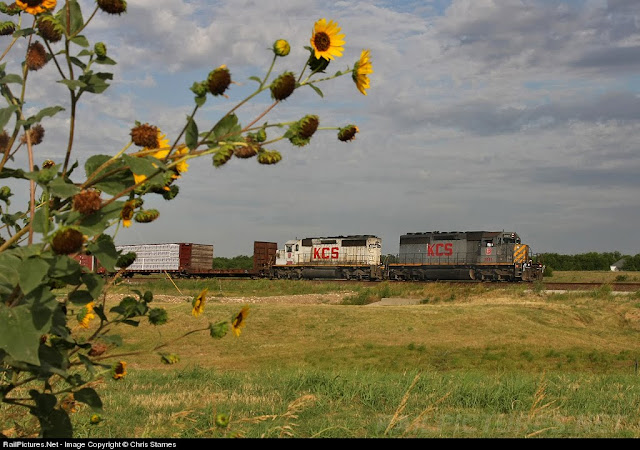 Today's train of thought features what could easily be one of America's most overlooked Class 1 railroads. Despite boasting more than 3200 miles of track, the Kansas City Southern operates mostly in the MidSouth, parts of Texas and some of the Midwest. Of course- that's not including some of KCS's subsidiaries that have been acquired in the past decade such as the Texas Mexican Railroad or their more than 2600 mile Mexican subsidiary- KCS de Mexico.

Fort Worth is about as far west as the KCS goes- at least on the American side of the border. And it is just to the north of here that railpictures.net contributor Chris Starnes caught this duo of  SD40-2s heading north on BNSF trackage rights at Justin, TX on a stormy July 2008 afternoon. The lead unit- SD40-2 #3061- is in the slightly newer Kansas City Southern grey with yellow trim paint scheme while the trailing SD40 is in the older all-white version with red letters. The train still has a few miles to go before reaching home rails at Wylie, TX.

With the recent expansion, KCS has purchased newer motive power from GE that's in the company's eye-catching orange black and yellow 'Southern Belle' livery reminiscent of the KCS early streamliners.
Posted by Fenway_Nation at 3:30 PM