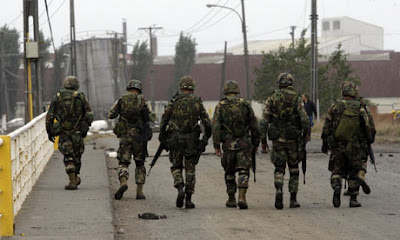 (Aliosha Marquez/AP)
Chile's central government moved to position additional Army personnel and Carabineros (Chile's national uniformed police force) officers in Conepcion, Talcahuano and other municipalities close to the epicenter of Saturday's magnitude 8.8 earthquake in a bid to quell looting in those areas. Over the weekend, looters emptied supermarkets, clothing stores, gas stations, grain silos and electronics stores, burning some of them to the ground afterwards. Authorities in Concepcion had declared a curfew and police had 55 people in custody for curfew violation on Sunday. 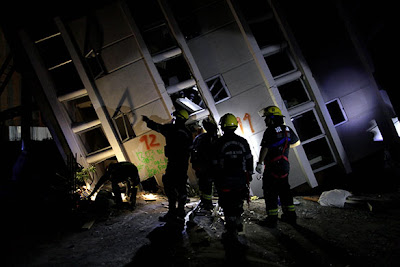 (Natacha Pisarenko/AP)
Outgoing Chilean President Michele Bachelete promised to deliver aid to the quake-stricken regions as the death toll went past 700, with 723 dead and at least 19 missing. Firefighters in Concepcion had pulled 25 survivors and eight bodies from a collapsed apartment complex while firefighters, soldiers and urban search and rescue teams were searching for signs of life in other collapsed buildings. Many survivors had taken to sleeping outside on the sidewalks, anticipating another quake.
The price of copper saw a brief spike on international trading, as Chile is the world's largest exporter of copper. Officials say the quake and its aftermath is expected to slow, but not halt the production and export of copper.

And at this time, Not Another New England Sports Blog! would like to salute Chilean tabloid La Cuarta for not only providing images and updates on the quake's aftermath throughout the weekend, but also providing Chileans with completely gratuitous T&A in their hour of need.