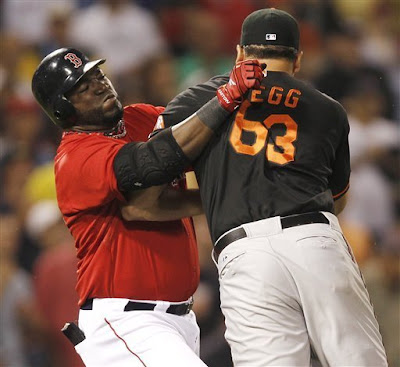 RED SOX: After moving into sole possession of 1st place with a 10-4 win in the series opener Thursday night, the Red Sox took on the Baltimore Orioles for Game 2 of the 4-game weekend series.

Those of you who thought the fireworks were over and done with after the 4th of July were dead wrong. The Red Sox seemingly had this one put away early thanks to an 8-run offensive outburst in the bottom of the 1st.

Gregg then threw inside to David Ortiz with one away. Big Papi took exception and walked a few steps out towards the mound before the umpire warned both benches as they started to spill out onto the field. On the very next pitch, Papi flew out to center.

Gregg apparently shouted something to Ortiz and was immediately ejected by home plate umpire Mike Estabrook. However, Big Papi either didn't know or didn't care as he charged in from the first base line and started swinging. Gregg stood his ground against the charging DH and swung back, although both big men largely missed their intended targets. First base coach DeMarlo Hale held Papi back while the benches emptied once again, with umpires and managers attempting to separate the players. Personally I hadn't seen anything that freaky since the Pedro Martinez-Don Zimmer battle royale in 2003....the fact that neither Gregg or Ortiz successfully landed a blow just made it even MORE bizzare.

So some 20 minutes later, everything was sorted out and Ortiz and Jarrod Saltalamacchia were tossed from the game along with Gregg and O's reliever Jim Johnson. The inning technically ended was Reddick was called out for abandoning 3rd base, but it took awhile to pull some of the players apart and sort through the ejections [didn't think the Bruins physical play would rub off on the Red Sox like that- NANESB!].

Boston wins by a final more reminiscent of a Ravens-Patriots score- 10-3. Beckett reportedly left Friday night's game with a hyperextended knee after pitching five complete innings and giving up 3 runs, walking two and striking out three.

OTHER SOX NEWS: Another Red Sox player has been named to the 2011 All Star game in Phoenix. 3B Kevin Youkilis will replace the Yankees' Alex Rodriguez after A-Rod announced he would withdraw from the midsummer classic due to a right knee injury.

A-Rod won't be the only Yankee to pull out of the All Star game. Team captain and shortstop Derek Jeter- on the cusp of 3,000 career hits- announced Friday that he would not participate owing to a calf injury. Jeter will be replaced by Tiger's SS Jhony Peralta. 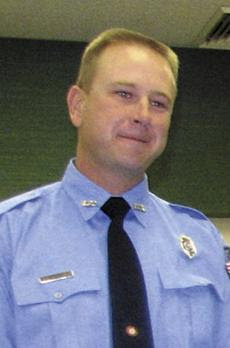 ELSEWHERE IN MLB: A firefighter from Brown County, TX died in a tragic and bizarre accident at Rangers ballpark in Arlington, TX Thursday night. 39 year old Shannon Stone was at the park watching the Texas/Oakland with his 6 year old son Cooper. Outfielder Josh Hamilton fielded a foul ball when he spotted the father and son. Thinking they would appreciate a souvenir, Hamilton tossed the ball their direction, but while trying to catch it, Shannon lost his balance and fell 20 feet, landing on his head. The firefighter would later die from his injuries.

“Red flags go up in your mind because you take things for granted for so long because it doesn’t happen,” Hamilton said. “Then all of a sudden it happens and then you start thinking more about things. “You couldn’t help but think about it, You hope nothing like that happens again.”

Hamilton was back on the field for Friday night's game. The all-star outfielder, who became a born again Christian after a downward spiral of drug addiction and alcohol abuse early on in his career, said he plans on reaching out and contacting the family when they felt it would be appropriate.

The Rangers observes a moment of silence and wore uniforms adorned with a black ribbon as flags at the ballpark flew at half-staff Friday night. In the meantime, the Texas Rangers Community Foundation has set up a memorial fund in Shannon Stone's name.

NBA: Houston Rockets Cener Yao Ming has told team officials that he plans on retiring after several injury-plagued seasons in the NBA. Most recently, the Chinese star was sidelined with tendon problems last year. An uncertain labor outlook also probably provided Ming with disincentive to continue playing in the NBA.
Posted by Fenway_Nation at 11:02 PM