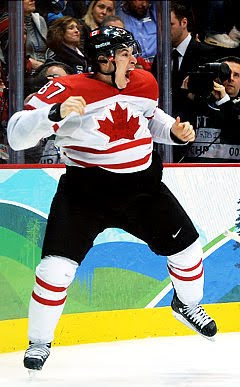 (Getty Images)
Men's Hockey: OK...congratulations Canada- gotta admit, you were scared there for awhile. Now what were the terms of our wager again? Loser has to have Stephen Harper as their head of state for the next 3 years?
In case you missed it, the USA/Canada matchup was one of those rare confluences of sporting events that lived up to the hype coupled with the fact that they take place once every four years, tops. Even rarer considering that there's virtually no guarantee that the USA and Canada would meet in the gold medal game. The last time the two nations met was the 2002 Winter Games in Salt Lake City (which actually isn't that long ago in terms of Olympic-ness). The two teams met earlier in the tournament to close out round-robin play with USA downing Canada 5-3.
With Canada's Prime Minister and actors Michael J Fox and William Shatner in attendance, both goalies Ryan Miller and Roberto Luongo were looking sharp early, although Johnathan Toews was able to get the first goal of the game for Canada at the 12:50 mark of the first period. Corey Perry would add to that 7 minutes and 13 seconds into the second, although Ryan Kessler would get one past Luongo to put the USA on the board.
Still down 2-1 in the 3rd, Team USA pulled Ryan Miller for an extra attacker with about a minute and a half remaining in regulation. More often than not, the team that's down by one goal and pulls the goaltender for an extra attacker will ultimately end up losing by two goals. Hell- Canada tried this against Team USA last week and all it did was seal Canada's only loss of the tournament. Only this time it was one of those 'Holy crap! It worked!' deals when Zach Parise got one past Roberto Luongo to tie the game up at 2-2 with 25 seconds remaining. One could almost feel the air sucked out of Canada Hockey Place as the home team was so close to sealing the deal, only to have the contest head for overtime.

And it was in overtime that the little-known and obscure hockey player named Sidney Crosby was finally able to figure out USA netminder Ryan Miller. 7 minutes and 40 seconds into overtime, the underhyped 'Sid the Kid', who isn't very well known outside of Pittsburgh PA or his native Nova Scotia, took a pass from Jerome Iginla and slipped it in under the pads of Miller for the 3-2 win, the gold and no doubt all sorts of beaver (hey- it is Canada's national critter, y'know). Crosby's only other goal of the tournament was a shootout goal against the Swiss in the preliminaries. Canada outshot the USA 39 to 36, although it was a much closer margin than last week when the host nation outshot the USA 45 to 23.

Overall, great game....Canada just outlasted USA, although they had to be nervous heading into an overtime that was 25 seconds away from never taking place. In a way, this is a sort of reversal of the World Jr. Championships final back in January- USA blowing the late lead on what seemed like a back-breaker, only to win in OT...only Team USA wasn't playing in front of the home crowd in either instance. I also want to take this opportunity to thank Ryan Miller [Ruh-roh! A Bruins fan thanking the Buffalo goaltender!? What is this world coming to!? -NANESB!] for his outstanding performance throughout the tournament. I honestly don't think the USA would've gotten within sniffing distance of a medal if it wasn't for his efforts. One could almost hear the ebullient Rick Jeanneret enthusiastically bellowing 'WHAT A SAVE BY MILLER!' from the broadcast booth.....

So Canada gets the gold, USA gets the silver and Finland won the bronze Saturday in the match against the Slovaks. Although the Slovaks didn't get a medal, their 4th place finish is their best in hockey since splitting apart from the Czech Republic.

And as much as the '98 Games in Nagano or '06 Games in Torino were an argument against having NHL players in the Olympics, the Vancouver games were a ringing endorsement of their presence. Granted the performance by the heavily favored Russians and Czechs were a letdowns, but the efforts turned in by the USA, Canada, Slovaks and Finns made for some very dynamic and entertaining matches. Reportedly NHL Commissioner Gary Bettman was deciding against NHL players participating in the 2014 games at Sochi, Russia before the Olympics, although he may rethink his stance after the output from NHL players in the winter games this year.

Russian Olympic Federation: The polls are now closed, and I see that nobody selected Russia to finish tops in the medal count. Wise move, since the Russkies finished with only 15 medals- a disappointing 6th place overall with 11 fewer medals than host country Canada and 22 less than the USA. This has not gone unnoticed by Russian president Dmitri Medvedev, who has called for Russian Olympic officials to resign en masse in the wake of Russia's worst showing in the winter games since the Tsars were in power. Two events the Russian's traditionally dominate include figure skating and men's hockey; no Russian athlete won a gold in figure skating for the first time in over 50 years and the Russian hockey team's aspirations to leave Vancouver with a medal were crushed in a 7-3 spanking at the hands of host nation Canada in the semifinals. Russia basically has four years to get their shit together before hosting the 2014 Winter Olympics in the Black Sea resort of Sochi....which is only some 50 miles from that mountainous little republic of Georgia that they decided to invade back in 2008 in time for the opening ceremonies at the Beijing Summer Olympics.

NBC Coverage: In a nutshell, it sucked. OK, I thought having Al Michaels on hand for the gold medal game between USA and Canada was a nice touch, but the hockey coverage leading up to it was atrocious- most of it being shunted off to networks that hardly anybody watches and not everybody got with their cable or satellite subscription plan, or weren't available in HD on top of showing some Team USA matches on tape delay. I'm convinced the only reason NBC didn't pre-empt the gold medal match between the USA and Canada to show curling or ice-prancing is because those events were over and done with. Over time, I was more amused than bothered by the MSNBC ads depicting Ed Schultz and Keith Olberman's gangly stepson Rachel Maddow as some sort of rational, unbiased moderates when it's becoming more and more apparent MSNBC is where Air America hosts go to die. Or at least their careers do.
Posted by Fenway_Nation at 8:49 AM