TAMAULIPAS: At least 159 inmates in a Nuevo Laredo prison walked out of a service entrance overnight on Thursday in what's being described as the largest jailbreak in Mexico in recent years. Earlier this year, 85 inmates escaped from a prison in Reynosa, Tamaulipas- across the Rio Grande from McAllen, TX. This brings the total number of prison escapees this year to more than 200 just for the state of Tamaulipas.

One police official said that there are indications of complicity on the part of the prison guards and the chief warden for the facility is reportedly missing as well.

Federal police and soldiers were brought in to patrol the area and search for the escapees. 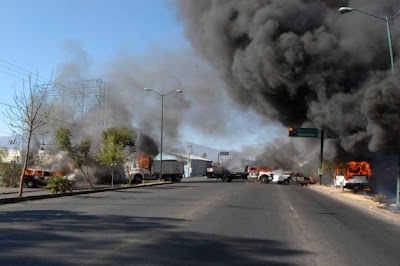 Police and military stormed into the town of Apatzingan, near the state capital of Morelia, where Moreno was believed to be hiding. In the ensuing firefight, Moreno and three other La Familia gunmen were killed along with five officers and three civilians. A spokesman for the Federal Police said that the death toll could be higher since some fleeing La Familia gunmen were seen taking their dead and wounded with them.
In response to the raid, La Familia gunmen blocked most of the exits around Morelia with stolen vehicles that were then torched (see above photo).

Although relatively new, La Familia Michoacan is unlike most other criminal organizations in that they have been known to recruit from drug rehabilitation centers throughout Mexico, portrays themselves as Robin Hood-esque defenders of the downtrodden and keeps their members in line with quasi religous indoctrination. This fervor does not prevent them from carrying out brutal murders or torturing opponents, but rather it classifies such activities as 'divine justice'. However, like other cartels, La Familia has been known to engage in human trafficking, extortion and mass production of synthetic drugs like methamphetimines. 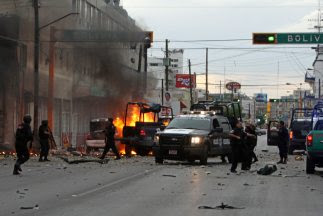 NUEVO LEON: A car bomb exploded outside a minicipal police station in suburban Monterrey.
Authorities say that three people were hurt and there was some damage done to the police building and nearby vehicles. This is the second car bombing south of the border this year and is believed to be a warning from one of the cartels.

TEXAS: A Mexican drone crashed into the backyard of an El Paso, TX residence on Tuesday, raising questions about what it was doing in US airspace or which government agency controlled it.

Officials from the Department of Homeland Security returned the downed craft to Mexican officials before the National Transportation Safety Board could inspect it. Depending on the point of impact, the UAV was anywhere from ⅓ to ½ a mile within US airspace when it went down.


ARIZONA: US Border Patrol agent Brian Terry was killed in a shootout with Mexican bandits in a mountainous area Northwest of Nogales, AZ on Wednesday. Terry was part of a 'BorTac' unit, shorthand for 'Border Tactical'- the Border Patrol's equivalent of a SWAT team charged with interdiction of smugglers and cross-border bandits.

Four suspects were taken into custody at the scene while a manhunt was underway for a fifth. FBI Agents and Santa Cruz County sherriff's deputies were combing the scene for further evidence after the shootout took place.

A Marine Corps veteran and born and raised in Michigan, Agent Terry's fuenral will be held in Detroit.

CHICAGO: The DEA announced the arrests of 7 people and the seizure of 11 tons of marijuana that was smuggled into the USA in six boxcars from Mexico.

Drug sniffing dogs from the Border Patrol first detected the contraband when it crossed the border from Piedras Negras, Coahuila to Eagle Pass, TX in mid-November. From there, it moved to Chicago over Union Pacific rails.

According to the manifest, the shipment consisted of titanium pigments from Jalisco, and the pot was indeed concealed inside industrial 'super sacks'. Law enforcement kept the Chicagoland warehouse listed as the destination under survaillence before making any arrests and seizing the marijuana.

[hat tip- Weasel Zippers, Friends of Ours]
Posted by Fenway_Nation at 10:36 PM