Two Boston sports institutions going up against arch rivals in the regular season, but with buzz- both before and after- more reminiscent of the postseason.

Did I already mention how fortunate I consider myself to be a New England sports fan at this point in history? 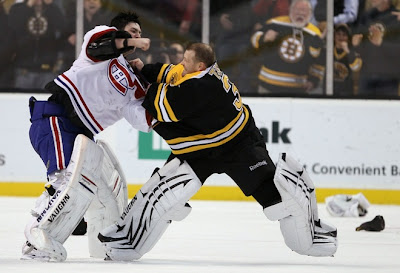 NHL: If there was only one B's game to be nationally broadcast this whole season, Wednesday night's home game against arch rival Montreal would've been the one. 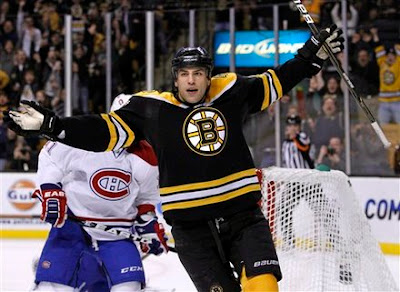 Apparently last week's game against Dallas was just a warm-up. Nothing like some Original 6 brawling- and not just figuratively- to get the blood going, huh?

With Montreal starting to close the gap in the Northeast division, the folks over at VS network thought Wendesday night's game was important enough to be boradcast on their network coast-to-coast (even though they were just carrying the TSN feed).

And man oh man was I glad I was able to tune in.

A good chunk of the first period seemed to feature the Bruins spending a disproportionate amount of time in Montreal's end of the ice, but with Montreal getting the better shots on goal (however infrequent). My perceptions changed somewhat after the 13 minute mark in the 1st when Brad Marchand and Dennis Seidenberg each scored 22 seconds apart (Seidenberg's tally coming off of a high bounce that the Montreal defener tried to corrall by swatting at with a stick). So Boston heads into the 1st intermission with a 2-0 lead.

Now on most nights, you'd be in pretty good shape if you could manage to get two by Montreal's Carey Price- especially if your own backstop is shutting them out. Not so on Wednesday night. The following video clips say it much better than I could-


For those of you who want to jump straight into the fisticuffs, hockeyfights.com was thoughtful enough to archive the melee towards the very end of the 3rd.


Most teams have every reason to expect to come out on top in a contest where they get six past Tim Thomas, but not Wednesday night. Both teams combined for 14 goals and 182 penalty minutes- nearly twice what was assessed in last week's game vs Dallas. As you can see from the video evidence, it's no exaggeration when I say that Boston absolutely beat the Habs down by a final of 8-5. The brawl at the end was simply the exclamation point.

The save percentages of both Price and Thomas also took a beating, with the Montreal backstop stopping 26 of 34 shots faces and Thomas stopping 27 of 33 shots faced. Micheal Ryder had two goals (one of them on the power play) and Milan Lucic had two goals (one of them shorthanded) and an assist on the night while Marchand, Seidenberg, Nathan Horton and Adam McQuaid also had tallies for the B's.

The win gives Boston a little bit more breathing room against the Canadiens (still the next closest team in the Northeast standings), and the Bruins lead over Montreal in the Division standings after Thursday night was 3 points after Montreal lost in a shootout to the NY Islanders but still got the 1 point.

The original 6 mania will continue this weekend when the Bruins have a home-and-away series against the Detroit Red Wings, with the first half taking place in the TD Banknorth Garden on Friday night at 7PM ET and be broadcast on NESN and the NHL Network.

The second half of the weekend series will take place at Joe Louis Arena in Detroit on Sunday afternoon, 12:30 PM ET- this game will be nationally televised on Comcast's NBC network.

OTHER BRUINS NEWS: Marc Savard is expected to miss the remainder of the season with a concussion. Savard had been sidelined with another concussion after being hit by former teammate Matt Hunwick in the Jan 22nd game against Colorado. 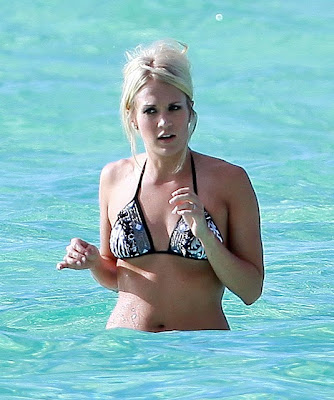 ELSEWHERE IN THE NHL: Eureka! I think the Nashville Predators have devised one of the most devious and effective methods of luring NHL talent to Music City- it's even more effective than the Underpants gnomes' business model!

Phase one would be to send out fetching starlets along the lines of Carrie Underwood to romance forwards like....oh...I dunno....Mike Fisher. Then, after the wedding, honeymoon, and a few atrocious seasons in the division's basement playing in the Canadian capital, you're hot, popular and musically talented spouse gets it in your head that perhaps you would be better off elsewhere- maybe somewhere closer to where she spends a good deal of the year. Like....oh...say Nashville, TN. And since your team is dead last in the conference, and Nashville happens to have a team that's doing pretty good this season (trailing the Red Wings by 5 points for #2 in the Central divison and 5th overall in the Western conference) it sounds like to good a deal to pass up.

Well played, Predators.....well played. [Now all that's left is to convince them that Nashville is in dire need of lazy, talentless bloggers and I'm sure a stampede of country music starlets will be stampeeding a path to my doorway- NANESB!]

The Predators acquired Mike Fisher in a trade that will send a 1st round draft pick and a conditional pick to Ottawa. Fischer was tied for the lead in scoring for the Sens with 14 goals and 10 assists in 55 games this season, and the Predators are hoping he'll be ready in time for Friday night's game against Colorado.


NBA: I have to confess, I was intentionally holding off on doing another sports update until after Thursday night's Lakers/Celtics game- a move that didn't pay off despite getting off to a promising start.

Most noteworthy was Ray Allen surpassing Reggie Miller to become the NBA's all time career leader in 3 pointers, with 2,561 on Thursday night (see above). After hat, it was kinda downhill for the C's.

Although Boston took a 53-45 lead into halftime, Kobe Bryant scored 20 of his 23 points in the second half as LA rallied to come from behind after trailing by as many as 15 points in 1st. Pau Gasol had 20 points and 10 rebounds for the Lakers while the only player in green on Thursday to score more than 15 points was Ray Allen- with 20.

The lack of offense in the 2nd paved the way for a 92-86 Lakers win at the Garden. This is Boston's 2nd loss in a row after losing 94-89 at Charlotte on Monday night. The Celtics will next host the Miami Heat on Sunday afternoon at the Garden, 1 PM ET on ABC. The C's and the Heat are tied for first place overall in the Eastern conference.

NCAA HOCKEY: The 2011 Beanpot got underway on Monday, with Northeastern making their presence felt in a 4-0 thumping of Harvard in the opening game.

This was immediately followed by the BC Eagles getting by the BU Terriers in OT thanks to Eagle's Junior Tommy Cross scoring the game winner 3:17 into the extra period.

The games Monday set up a BC/Northeastern final for the 2011 Beanpot on Valentine's Day.

AHL HOCKEY: Following the lead of the NHL and the Syracuse Crunch, the Connecticut Whale (formerly the Hartford Wolfpack- the NY Ranger's AHL affiliate) has set up an outdoor rink at UConn's Rentschler Field in E. Hartford, CT. The rink will be used for outdoor junior and high school games as well as a Whalers/Bruins alumni game leading up to the Feb 19th game where the Whale will host the Providence Bruins.

OTHER AHL NEWS: A Connecticut judge has ordered an East Hartford man to apologize and 10 days of community service after he tackled and punched Pucky, the Whale mascot. 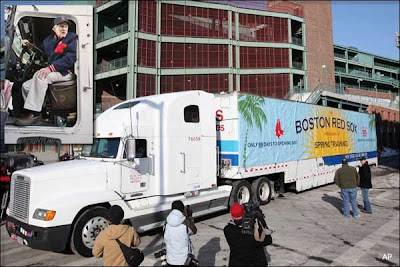 MLB: Never mind that rodent in Pennsylvania! Truck Day was this week, which means that Spring was right around the corner. The 'official' Red Sox truck (which, unsurprisingly, has a corporate sponsor) carrying the team's equipment left Fenway for Ft, Meyers, FL on Tuesday.


NCAA FOOTBALL: This video of UConn reserve quarterback Johnny McEntee has been circulating around the web. Heavily edited showboating or an appeal to get more playing time- what's your call?
Posted by Fenway_Nation at 10:44 PM