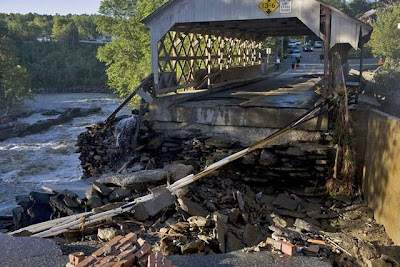 After making a second landfall on Sunday outside of Egg Harbor Township just outside of Atlantic City, NJ, Hurricane Irene churned north and was downgraded to a tropical storm around the same time she made a third and final landfall near Coney Island in Brooklyn, NY.

However, the storm would continue wreaking havoc with torrential rains and inland flooding as it continued north through the mountain ranges on either side of the Hudson River. 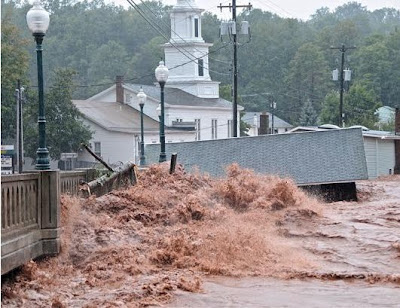 Southwest of Albany, Scoharie County was hit particularly hard by heavy rains and flooding. The rains sent water over the banks and through the main streets of towns like Prattsville and Windham.

Irene did not let up when she crossed over into the Green Mountain state, dumping as much as 11 inches of rain in just under 48 hours, turning placid rivers into swollen torrents of water sweeping away cars, homes, railroads, chunks of highways and even the region's iconic covered bridges.

Portions of roadways and bridges throughout Vermont have been washed out, leaving entire towns severed from the rest of the state. Route 9, a two lane thoroughfare that crosses the southern portion of Vermont linking Bennington with Brattleboro has been closed indefinitely according to the Vermont Agency of Transportation. At least 30 bridges on state highways- from covered to modern- remained closed as well as any number of bridges on county or municipal roads.

The Vermont National Guard was activated to airlift food, clean water and supplies to towns by helicopter where the road links to the rest of the state had been severed. With 55 Vermont National Guard soldiers and 6 Blackhawk helicopters deployed in Iraq, the National Guard from New Hampshire and Illinois sent additional craft and personnel to assist while high-wheeled vehicles were used to traverse stretches of road that had been washed away.

So far the death toll from Irene is 41 throughout 11 states. The storm is also responsible for an estimated $7 billion in property damage from North Carolina's Outer Banks to northern Vermont.
Posted by Fenway_Nation at 11:03 PM