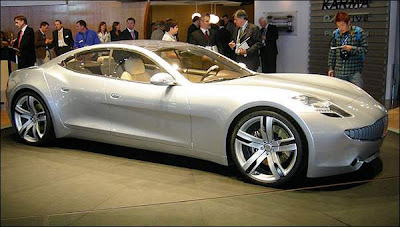 The Obama Administration and Department of Energy are defending a $529 Million loan to Anaheim, CA-based electric car manufacturer Fisker after a report from ABC News on Thursday highlighted the fact that two years ago, the Administration approved the company shifting production overseas to Finland.


Vice President Joseph Biden heralded the Energy Department's $529 million loan to the start-up electric car company called Fisker as a bright new path to thousands of American manufacturing jobs. But two years after the loan was announced, the company's manufacturing jobs are still limited to the assembly of the flashy electric Fisker Karma sports car in Finland.

"There was no contract manufacturer in the U.S. that could actually produce our vehicle," the car company's founder and namesake told ABC News. "They don't exist here."

Henrik Fisker said the U.S. money has been spent on engineering and design work that stayed in the U.S., not on the 500 manufacturing jobs that went to a rural Finnish firm, Valmet Automotive.

The loan to Fisker is part of a $1 billion bet the Energy Department has made in two politically connected California-based electric carmakers producing sporty -- and pricey -- cutting-edge autos. Fisker Automotive, backed by a powerhouse venture capital firm whose partners include former Vice President Al Gore, predicts it will eventually be churning out tens of thousands of electric sports sedans at the shuttered GM factory it bought in Delaware. And Tesla Motors, whose prime backers include PayPal mogul Elon Musk and Google co-founders Larry Page and Sergey Brin, says it will do the same in a massive facility tooling up in Silicon Valley.

Fisker is more than a year behind rolling out its $97,000 luxury vehicle bankrolled in part with DOE money. While more are promised soon, just 40 of its Karma cars (below) have been manufactured and only two delivered to customers' driveways, including one to movie star Leonardo DiCaprio.

A department of Energy spokesman defended the loan to Fisker, saying that the company also plans on producing a $50,000 hybrid called the Nina at a shuttered General Motors plant in Delaware.


"The Department's funding was only used for the U.S. operations," Energy Department spokesman Dan Leistikow wrote. "The money could not be, and was not, spent on overseas operations. The Karma also relies on an extensive network of hundreds of suppliers in more than a dozen U.S. states."

He said the first part of the loan, $169 million, supported engineering work at Fisker's U.S. facilities as the company "developed the tools, equipment and manufacturing processes for Fisker's first vehicle" -- though that work so far has not contributed to a production line in the U.S.

But Leistikow said the rest of the loan is still supporting U.S. production of another vehicle line called the Nina.

"Fisker is using this funding to bring a shuttered General Motors plant in Delaware back to life and employing more than 2,500 workers. Fisker was attracted to this site in part by the opportunity to rehire some of the trained, dedicated workers who lost their jobs when that plant closed," Leistikow said.

However, industry sources are claiming that Fisker's production of the Nina at the Delaware site has been pushed back to mid-2013. Fisker claims that the car has been designed and built, but remains under wraps to maintain a competitive edge.

Moreover, according to a recent Forbes article, once off its electric motor (reportedly good for 32 miles) the Fisker's Karma hybrid actually gets worse gas mileage than a late model Ford Explorer SUV

Does anybody else remember the various factory and workshop tours that President Obama embarked upon during 'Recovery Summer' last year? All of them seemed to pivot around so called 'Green Jobs'- factories that made electric vehicle components, solar panels or batteries for hybrids. And it seems that this wasn't really by accident, either.
Posted by Fenway_Nation at 10:32 PM