May Day Sports Chowdah Update- Sox Win Big With Bats and Feat of Clay; After Trailing Early Bruins Finish Game 1 Boston Strong; Back- But Not in Black, Celtics Showing Life in the Knick of Time

BOSTON BRUINS- After finishing the regular season seemingly with a whimper, the Bruins were set for their first round opponent- Northeast Division rival and fellow Original 6 member Toronto, who's fans had been waiting since 2004 for a playoff appearance. As the CBC points out, nobody had ever posted live updates about a Maple Leafs playoff game or live-tweeted one, since those social media platforms were still a few years away from being introduced.

Game one of the Eastern Conference Quarterfinals got underway Wednesday night at the TD Garden. James van Riemsdyk got the blue and white on the board early with a power play goal less than two minutes into the first, but Boston would tie it up with a Wade Redden tally with less than five minutes to go and then take the lead on this Nathan Horton power play goal with 11.7 seconds left in the first period:

Horton's tally would turn out the be the game-winner, but the Bruins added two more in the second with even strength goals by David Krejci and Johnny Boychuk in the second period as Toronto scrambled.

The Bruins would go on to win Game 1 by a 4-1 final and Tukka Rask stopped 19 of the 20 shots he faced. Leafs goalie Jamie Reimer faced twice as many shots and allowed four goals in game one while David Krecji had a goal and a pair of assists Wednesday night.

Despite the lackluster finish to the regular season where they had lost seven out of their last nine, the Bruins are off to a good start in the Stanley Cup playoffs. Game two is set to take place on Saturday with the puck dropping at 7:00 ET. The contest will reportedly be televised on NESN, CBC and CNBC. 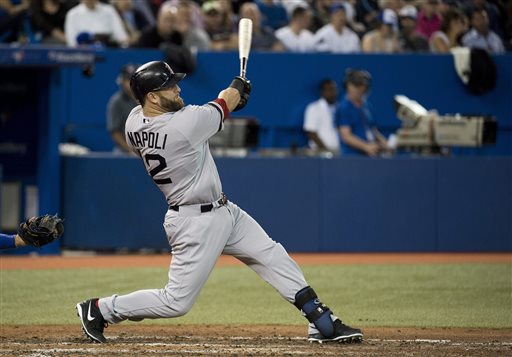 RED SOX- Wednesday night's opening matchup of the Stanley Cup playoffs wasn't the only Boston vs Toronto matchup going on.

After Jon Lester was hung with his first L of the season in a high-scoring 9-7 loss to the Blue Jays, Clay Buchholz took to the mound on Wednesday night in Toronto.

Clay would get some run support early thanks to a two run home by Stephen Drew in the top of the second to give the Sox a 2-0 lead. As Buchholz was confounding the Toronto bats, allowing just two hits and three walks over seven innings worth of work, the Boston batters seemed to have Jays starter Mark Buehrle figured out as he gave up solo homers to Mike Napoli and Daniel Nava in the top of the 4th to make it a 4-0 Red Sox lead. With two away in the top of the 7th, Buehrle was pulled for Esmil Rogers who allowed Jonny Gomes to come home on a wild pitch to make it 5-0. With Dustin Pedroia on first base, the Jays decided to walk DH David Ortiz to get to Mike Napoli. That would prove to be a huge mistake as Napoli blasted a Rogers offering into the Sightlines Restaurant for a 3-run homer, breaking the game wide open with an 8-0 lead. Alex Wilson would come in in relief of Buchholz in the bottom of the 8th and give up a 1-out RBI triple to Brett Lawrie, but Boston would get out of the inning without any further damage and tack on two additional runs in the top of the 9th- including a Mike Carp solo homer to make it a 10-1 game.

The Red Sox would cruise to a 10-1 win thanks to the explosive bats and a strong seven innings by Buchholz, who is now 6-0 with a 1.01 ERA. Napoli would go 3-4 with two homers and 4 RBI while SS Stephen Drew would go 3-5 with a homer and two RBI.

Thursday night's game will have Ryan Dempster [1-2; 3.30 ERA] going up against the Jay's JA Happ [2-1; 3.86 ERA]. Despite the 1-2 record [along with some no decisions thrown in along the way- NANESB!], Dempster has 43 strikeouts in 30 innings pitched so far this season. First pitch is at 7:07 ET and the game will be broadcast on NESN and Rogers Sports Net. 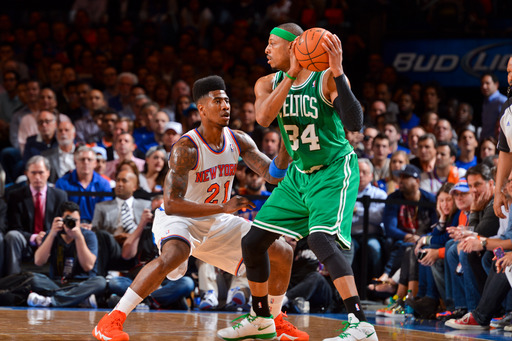 BOSTON CELTICS- After Sunday's win in the Garden to keep the series against the NY Knicks alive and stave off the sweep, the Celtics received some bulletin board materiel from the Knicks Kenyon Martin before Wednesday's Game 5. Martin had told his teammates to 'wear black- funeral colors' in anticipation of burying the Celtics at Madison Square Garden.

For Game 5, the Knicks got off to a torrid start, scoring 11 unanswered points to start off the game, but the Celtics would cut into their lead before halftime, getting their first lead of the night with 5:45 remaining in the 2nd quarter, leading 45-39 at halftime. In the second half, they started to pull away thanks in large part to Paul Piece's 10 points in the 3rd quarter.

From there, the C's would cruise to a 92-86 win, stunning the home crowd at Madison Square Garden. This would be Boston's second playoff win in the post Big Three era. Apparently some harsh words were exchanged after the game after C's reserve player Jordan Crawford [who didn't see a second of action in Game 5- NANESB!] got into a shoving match with Carmello Anthony and Ray Felton- although it was pretty mild in comparison to January's much publicized ballyhoo between Anthony and Garnett.

The somewhat unheralded Jeff Green led Celtics scoring on Wednesday night with 18 points, including going 2-2 from 3 point range. The remaining duo from the Big Three- Pierce and Garnett- had 16 points each while Jason Terry was once again productive coming off the bench with 17 points.

With the win, the series heads back to Boston for a Game 6 on Friday night, which will get underway at 7:00 ET and will be broadcast on ESPN. Boston is trying to become the first NBA team to come back from an 0-4 series deficit in a playoff series.

NEW ENGLAND PATRIOTS- After trading off their first round pick to the Minnesota Vikings, the New England Patriots had two second round picks and selected Southern Mississippi LB Jamie Collins and Marshall WR Aaron Dobson (52nd and 59th overall). Rutgers figures prominently in the Patriot's 3rd round selection when they chose former Scarlet Knights CB Logan Ryan and SS Duron Harmon (83rd and 91st overall). New England only had one pick on the 4th round- TCU WR Josh Boyce- and didn't have another selection until the 7th round where they selected Illinois DE Michael Buchanan and Rutgers LB Steve Beauharnais. 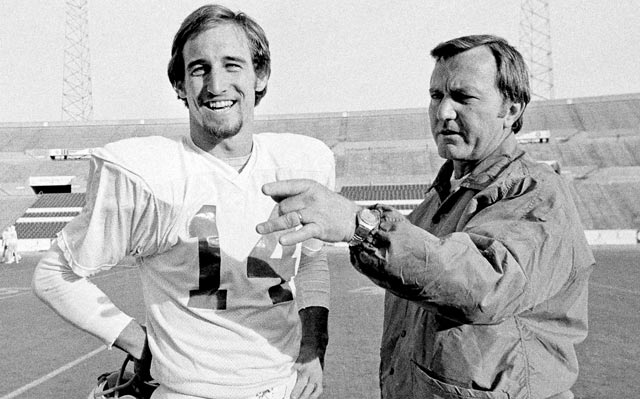 OTHER PATRIOTS NEWS- Former Sooners and Patriots head coach Chuck Fairbanks passed away in his suburban Phoenix, AZ home last month. The 79 year old, who coached Heisman winner Steve Owens with the Oklahoma Sooners and was coach when the Patriots earned their first playoff berth since the AFL-NFL merger, had been battling brain cancer at the time.

Fairbanks came to New England from Oklahoma in 1973 and within three years the Patriots were in their first playoff game since the 1963 AFL Championship. While he drafted popular quarterback Steve Grogan out of Kansas State, Fairbanks was sued by the Patriots for breach of contract when he told then-owner Billy Sullivan he wanted out of the remainder of his contract in order to become head coach of the Colorado Buffaloes. Fairbanks had reportedly been recruiting for Colorado whole still New England's head coach in 1978. The dispute was resolved when a group of Colorado boosters bought out the remainder of Fairbanks' contract in October 1979.

After his coaching career- including a short lived stint in the USFL- Fairbanks dabbled in real estate and golf course development and consulted for NFL teams in training camp, including the Cowboys when former Pats and Giants head coach Bill Parcells was at the helm.

OTHER NFL NEWS- Former broadcaster and New York Giants kicker Pat Sumerall passed away at the age of 82 in Texas on April 16th.

Born and raised in Lake City, FL, Sumerall attended the University of Arkansas where he would play both tight end and placekicker for the Razorbacks between 1949 and 1951. Although drafted in the fourth round by the Detroit Lions, Summerall played for the New York Giants and put the first points on the board for the G-Men during the 1958 NFL Championship Game- dubbed 'The Greatest Game Ever' by some and considered by many to be the starting point of the NFL's ascendency [the Giants would go on to lose by a 23-17 final- NANESB!].

However, Sumerall is best known for calling NFL games in his smooth, calm voice. Initially that voice found a home on local stations in New York and then CBS Sports. However, by the early 1990s, upstart FOX sports surprised the broadcast industry by outbidding CBS for the rights to the NFC broadcast package [to this day, CBS maintains the rights to the AFC broadcasts- NANESB!]. At FOX, he was reunited with the loud and boisterous John Madden as his broadcast partner. The duo called three Super Bowls together, including their final game- the Patriot's surprise win over the heavily favored St Louis Rams in Super Bowl XXXVI in New Orleans.

Sumerall's also did voiceover work for the NFL and lent his voice to appearences on The Simpsons and Family Guy as well as radio ads for True Value hardware and Dux Beds.
Posted by Fenway_Nation at 11:50 AM