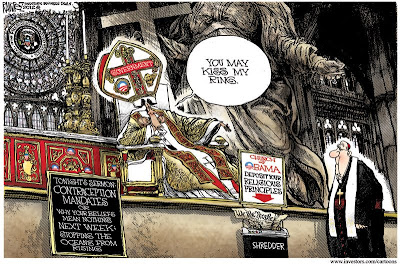 House Minority Leader Nancy Pelosi lauded the Obama Administration's earlier decision not to exempt faith-based hospitals, universities and schools from a mandate in 0bamacare that would require them to provide free contraceptives and birth control for employees, despite such actions going directly against Catholic doctrine.

Pelosi's justification of the Administration and HHS ruling on January 20th seems to primarily consist of 'Well all the cool kids are doing it!'.

"I'm going to stand with my fellow Catholics in supporting the administration on this. I think it was a very courageous decision that they made and I support it."

[I swear, if this woman went out of her way to patronize and insult Muslims as much as she did Catholics, she would need round-the-clock protection and have to shack up with Salman Rushdie- NANESB!].

Instead of any sort of exemption for a religious institution, the Obama Administration and Department of Health and Human Services decided that they would simply get an additional year to fall into compliance with their mandate [which just happens to be AFTER an election year; President Obama would rather jab a stick in that hornet's nest after he's done running for re-election- NANESB!].

While the decision didn't come as a surprise to organizations like the American Council of Bishops, they still expressed disappointment with the ruling.

The delay was no consolation to Cardinal-designate Timothy M. Dolan, archbishop of New York and president of the U.S. Conference of Catholic Bishops. “In effect, the president is saying we have a year to figure out how to violate our consciences,” he said. “The Obama administration has now drawn an unprecedented line in the sand.”

However, Catholic and evangelical groups have stressed that their concern over the mandate isn't logistical, but rather philosophical.

The final regulation, however, keeps the conscience clause narrow: Only organizations that are faith-based and primarily employ those of the same faith are eligible for the exemption.

It does, however, give a nod to religious groups’ concerns, allowing faith-based nonprofits an extra year to begin covering contraceptives. White House officials explained the decision as regulatory in nature, rather than responding to the philosophical objections that religious organizations had raised.

“We know that a lot of these organizations may be large organizations, there are approval processes that require the approval of boards,” an administration official told reporters on a call this afternoon. “The transitional period responds to those concerns.”

Interesting how HHS granted a number of waivers to President Obama's allies in the labor union movement but there will be no exemption for Catholic or Evangelical institutions by this Administration.

Some Catholic Bishops have already stated that they will not comply with the contraceptive mandate in 0bamacare.

Bishop Olmstead is fighting the mandate from the U.S. Department of Health and Human Services that forces charities, schools or hospitals with a religious affiliation to provide birth control coverage as part of its health plan -- even if birth control goes against their religious beliefs.

“This is contrary as to who we are as Americans. Liberty, freedom is very much as to why we began as a nation,” said Bishop Thomas Olmstead on News Talk 550 KFYI.

He and other catholic leaders across the country are fighting the Obama administration on the issue of birth control as a mandatory part of an employee health insurance. Churches would be exempt, but not other religious institutions.

He says the issue is being “forced down their throats.”

Even if one is inclined to believe that birth control and contraceptives should be given out like little packs of M&Ms at Halloween, how exactly is the HHS's mandate not in direct violation of the 1st amendment?

Congress shall make no law respecting an establishment of religion, or prohibiting the free exercise thereof; or abridging the freedom of speech, or of the press; or the right of the people peaceably to assemble, and to petition the Government for a redress of grievances.

Or does the first amendment no longer apply because the Catholic Church and other faiths' stance on birth control and contraception is outdated and no longer 'cool'?
Posted by Fenway_Nation at 10:34 PM