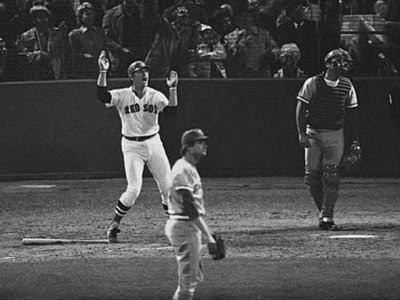 Before the 2004 and 2007 World Series and historic comeback in the 2004 ALCS, this was the closest the Red Sox came to World Series triumph since the roaring twenties: The iconic image of Red Sox catcher Carlton Fisk using all the body english he could muster to wave fair a fly ball he hit off of Cincinnati reliver Pat Darcy in the bottom of the 12th inning of Game 6 in the 1975 World Series.

So engrained is the image in the psyche of Red Sox Nation [before they even started selling plastic cards- NANESB!] that the fact that the Cincinnati Reds would win the deciding Game 7 the following night was almost an afterthought. Fisk himself joked that he liked to tell people that the Red Sox won the World Series that year 3 games to 4.

It would be another 11 seasons before the Red Sox got anywhere near a deciding game in the World Series, and that too would evaporate with a ground ball rolling between the wickets of one Bill Buckner- at which point certain Boston sportswriters began what amounted to a cottage industry with talk of a curse.

Whether or not there was some otherworldy voodoo or hexes at work, all that came to an end 8 years ago with the Red Sox advancing to the World Series on an improbable comeback when they were three outs away from getting swept in the best-of-7 ALCS by their hated archrival, the New York Yankees. From there, Boston swept the St Louis Cardinals for their first World Series title in 86 years. The curse was gone- but one look at the animated Fisk makes one wonder if there ever was a curse to start off with.
Posted by Fenway_Nation at 4:14 AM