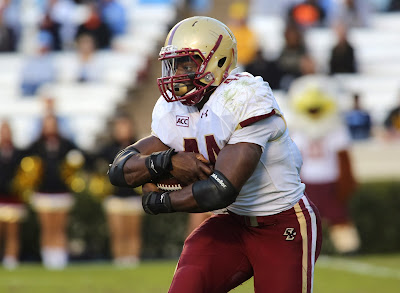 NCAA FOOTBALL- Saturday's matchup between the Boston College Eagles and New Mexico State Aggies was a little unusual on a couple of different levels. For starters, unless it's Notre Dame or one of the Military academies, it's a quite unusual for Boston College to be playing an out of conference game this late in the season.

Also, like the Military academies or Notre Dame, Saturday's opponent was independent- along with the University of Idaho Vandals, the NMSU Aggies football program was abruptly 'orphaned' when the Western Athletic Conference pulled out of football altogether at the end of the 2012 season. This left both Idaho and NMSU without a conference as other WAC members such as Nevada, Fresno State, Hawaii, Utah State and San Jose State had jumped ship to the Mountain West conference and Louisiana Tech to Conference USA in recent years.

The fact that Saturday's game in Las Cruces, NM was officiated by a Sun Belt Conference officiating crew seemed to provide an indicator of the NMSU Aggies eventual new home. Coming into the Veteran's Day weekend game, the Aggies had won exactly one game- a 34-29 over FCS Abilene Christian on Octbober 26th while the Eagles were still giddy from their win over Virginia Tech at Chestnut Hill the week before.

That giddiness and overconfidence led to some sloppy early on in the game, however. After the Boston College defense forged the Aggies to go three and out on their first possession, the Eagle's David Dudeck fumbles the Aggie's punt, giving NMSU the ball at the Eagles' 29. After holding the Aggies on 3rd and 7, NMSU got on the board first with a 43 yard FG to make it 3-0.

The Eagles got their first TD of the day when QB Chase Rettig connected with TE Mike Naples for a 69 yard catch and run late in the first to make it 13-3.

However, the Aggies began chipping away at the Boston College lead with their first possession of the 2nd quarter, which was capped by a 14 yard TD pass from QB Andrew McDonald to WR Austin Franklin to make it a 3 point game at 13-10.

With under 4 minutes to go in the first half, Boston College took a 10 point lead on a 6 yard TD pass from Rettig to WR Harrison Jackson, but a game NMSU offense was able to move the ball 75 yards down the field in less than three minutes and hit paydirt with 30 seconds left in the half thanks to a 6 yard Xavier Hall TD run to once again make it a 3 point lead.

The second half started out looking as though it would be all Boston College with Chase Rettig connecting with WR Alex Amidon for a 30 yard TD pass to make it a 27-17 game. But the Eagles defense would have a hard time bottling up RB Xavier Hall as he ran for 42 yards before the Aggies once again closed to within 3 points thanks to another McDonald TD pass- this time to WR Jerrell Brown.

In the early going of the 4th quarter, Boston College managed to stop the NMSU in the Eagles' 12 yard line and limit the Aggies drive to a game-tying FG. The tie didn't long as Myles Willis returned the Aggies punt 98 yards to give Boston College the lead back, making it a 34-27 contest.

However, NMSU would manage to knot the game back up less than 2 minutes thanks to a 48 yard TD pass from McDonald to Franklin. With 5:33 left in the game, the Aggies special teams managed to pin the Eagles inside their own 3 yard line before the field got a little bit shorter thanks to a 5 yard penalty against NMSU and then an 80 yard TD run from RB Andre Williams to give Boston College the lead for good.

For good measure, Eagles LB Steven Daniels would pick off McDonald at mid-field and once again, Andre Williams would run for the TD to put Boston College up by a 48-34.

Although it was too close to comfort for awhile, Boston College goes on to win by a 48-34 final. This is Boston College's first road win since November 25th, 2011 when the Eagles beat Miami 24-17. Chase Rettig went 17 for 25 with 230 yards and 3 TD passes while Andre Williams had 30 carries for 295 yards- a BC record- as well as two late, pivotal touchdowns in the 4th quarter to put the Eagles up for good.

The remainder of the Eagles schedule has them playing against ACC teams, hosting the NC State Wolfpack at Chestnut Hill on Saturday Nov 16th. The season wraps up on Nov 30th at Syracuse's Carrier Dome against the Orangemen- who joined the ACC this season after jumping ship from the Big East last season.

NFL- No Patriots last week, but they'll come out of the bye week for their only Monday night game of the season- a road game against the 6-3 Carolina Panthers slated to kick off at 8:40 ET on ESPN.


NHL- Although it took overtime on Thursday night, the Bruins kept a 4-game winning streak going thanks to an unassisted Milan Lucic tally in OT against the Columbus Blue Jackets. Both teams were shut out on the power play with Boston going 0-1 and Columbus going 0-4. Tukka Rask had the night off and former Coyotes netminder Chad Johnson was between the pipes for the B's, stopping 32 of 34 shots faced while Sergei Bobrovsky turned aside 28 of the 31 shots he faced.

The Bruins will look to continue their winning streak against the Ottawa Senators on Friday night from the Scotiabank Centre.
Posted by Fenway_Nation at 3:11 PM