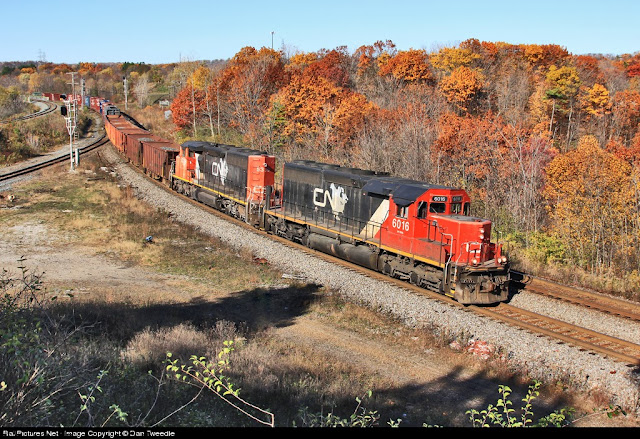 Today's Train of Thought takes us north of the border and features an unusual aspect of Canadian National's operation.

What appears to be a regular mixed freight is actually a special train operated on the Canadian National for the sole purpose of familiarizing management personnel with hands on operation of freight trains. At first blush, the eventual purpose of such a train would be to press management into duty as train service crews in the event of any sort of labor disruption. This somewhat unusual train has been dubbed by some as 'the scab train' or 'manager's special'. On astute observer pointed out that the scab train primarily operates hauling ballast cars and empty flatcars, not 9000 foot freight trains loaded with hazardous or bulky materials.

Here, railpictures.net contributor Dan Tweedle caught one such train- officially designated Train 908- coming off the Dundas subdivision in southern Ontario as it approaches the yard in Hamilton, ON on November 4th, 2011 with the trees behind the tracks still displaying some fairly late color.
Posted by Fenway_Nation at 10:52 PM