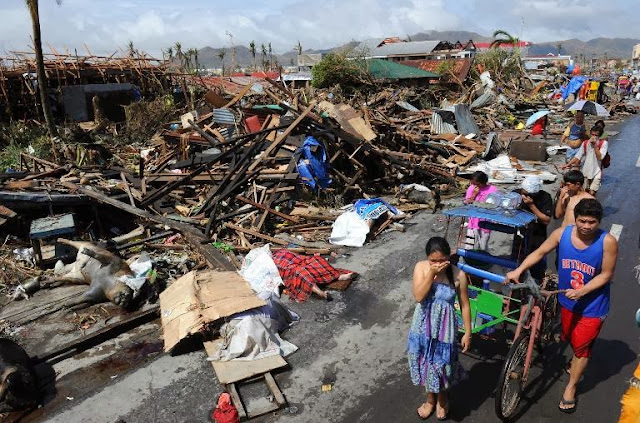 While ships from the US and Royal Navy have moved into the region to support relief efforts, officials from the United Nations are saying that at least 4,460 people have been killed in the wake of last week's Typhoon Haiyan [also referred to as Typhoon Yolanda in the Philippines- NANESB!].

Local officials claim the death toll is much higher- as many as 10,000 on the island of Leyte alone- and while that can't be confirmed yet, the death toll is expected to rise. Hundreds of victims of the typhoon were reportedly buried in mass graves near the city of Tacloban with DNA samples being taken prior to burial so that Philippine authorities could eventually identify the dead.

As relief work and attempts to reach the hardest hit areas got underway, it's believed that more than 11 million Filipinos have been affected by Haiyan's rampage- this includes loss of a home or business or loss of electric power. With aid slow to arrive due to debris clogging roads in and around Tacloban and damage to the airport, there were reports of widespread looting in the area.

Crews are also working to restore power on Leyte. The city of Tacloban was down to one hospital with no power and most of the roof torn off to treat those injured by the typhoon.
Posted by Fenway_Nation at 11:54 PM