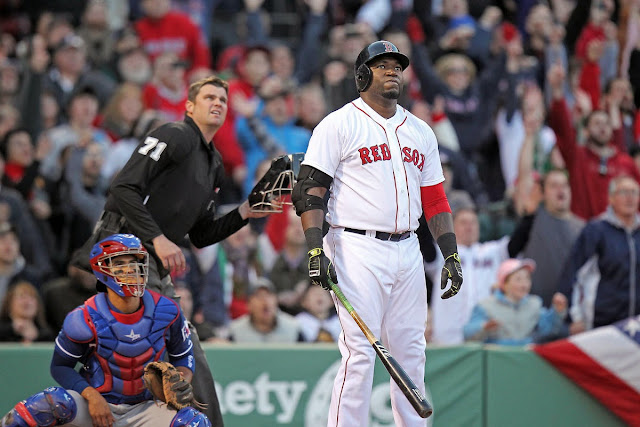 That set up the rubber game on Wednesday with Jake Peavy getting the start against Texas' Robbie Ross. Although Ross walked a lot of Red Sox batters, he was also able to get out of trouble by inducing a number of double-play balls. The Red Sox got on the board in the bottom of the 3rd when with one away and runners on first and second, Dustin Pedroia hit an infield single and Jackie Bradley Jr came home on Robbie Ross' throwing error to make it a 1-0 game.

However, the 1-0 lead wouldn't last and Mitch Moreland would lead off the top of the 7th with a solo homer to tie the contest up at 1-1. Peavy would get two more outs before Tazawa came out of the bullpen in relief. Elvis Andrus would lead off the top of the 8th inning with a double off of Andrew Miller before Miller got Prince Fielder to ground out to first- moving Andrus up to third. Alex Rios would then hit a sac fly to deep center to put the Rangers up 2-1.

In the bottom half of the 8th, Jackie Bradley Jr led off with a walk before AJ Pierzynski pinch hit for Jonny Gomes, getting a single off of Rangers reliever Alexi Ogando. Grady Sizemore then pinch ran for Pierzynski. Dustin Pedroia then grounded into a fielder's choice, erasing the runner at second but moving JBJ up to third base with a runner on first. With Big Papi on deck, Texas manager Ron Washington then called upon Neal Cotts to end the Red Sox rally. Instead, with two on, one out and a 1-1 count, this happened.

After a brief review and conference by the umpires, Ortiz's HR call was upheld and the Red Sox took a 4-2 lead. Koji Uehara then came on in the 9th and got all three batters he faced in order to end the ballgame and nail down Boston's first series win at home in the young 2014 season. Despite a good effort by Peavy, he got no decision after going 6 and ⅔ innings, allowing three hits, one run, four walks and striking out 8 batters. Despite giving up what was at the time the go-ahead run in the top of the 8th, Andrew Miller was credited with the win and Koji Uehara got his second save of the season. David Ortiz led all Red Sox batters on Wednesday going 2-4, including his go-ahead homer in the bottom of the 8th.

On Thursday, the Red Sox will travel to the Bronx for the first time this season to take on the Yankees. New York comes into Thursday night's game sporting an identical 4-5 record after dropping two out of three at Yankee Stadium to Baltimore [the Orioles also sport a 4-5 record while Toronto currently leads the AL East with a 5-4 record- NANESB!]. Clay Buchholz [0-0; 12.46 ERA] will go up against Michael Pineda [0-1; 1.50 ERA]. First pitch is scheduled for 7:05 ET and the game will be televised on NESN and the MLB network.


ELSEWHERE IN MLB- Barely a week into the 2014 season, the Los Angeles Angels were dealt a blow when outfielder Josh Hamilton suffered a torn ligament in his thumb after sliding into first in an attempt to beat out a throw in Tuesday night's game against the Seattle Mariners. Hamilton got off to a scorching start in the 2014 season with a .444 batting average along with two homers and 6 RBI. Hamilton was placed on the 15 day DL and is expected to miss anywhere from six to eight weeks after undergoing surgery.

NHL- With just 3 games remaining in the regular season, the Bruins continue their road trip through the upper Midwest on Thursday night when they make their one and only trip to Winnipeg to take on the Jets. The Bruins are coming off of a 4-3 shootout loss to Minnesota on Tuesday night The Bruins were leading 3-2 in the final 90 seconds of regulation when Ryan Suter got a game-tying goal with 1:05 left in the game.

After a scoreless OT, Mikko Koivu would then get the only tally in the shootout- the two points are enough for the Wild to lead the wild card race in the west for Minnesota.

Meanwhile, the Bruins bested the Jets at the Garden by a 4-1 final in their only previous meeting this season.
Posted by Fenway_Nation at 10:32 AM