RED SOX- After Sunday night's late rally, the Red Sox attempted another come-from-behind win against Baltimore on Patriot's day after falling behind 6-0. Boston managed to cut the O's lead in half in the bottom of the 5th and a 7th inning David Ross solo homer made it a 2-run game. However, Baltimore would get a key insurance run thanks to a Ryan Flaherty RBI single in the top of the 8th to make it 7-4. Mike Napoli led off the bottom of the 8th with a solo homer to once again pull the Red Sox to within two. In the bottom of the 9th, Tommy Hunter managed to load the bases with one away, allowing an infield hit to Brock Holt, a double to Dustin Pedroia and an intentional walk to David Ortiz. Once again, Napoli was able to pull the Sox to within 1 after hitting into a fielder's choice that brought Holt home, but Mike Carp grounded out to first base for the final out of the ballgame.

The Red Sox lost by a final of 7-6 on Marathon Monday and things didn't get much better when the Yankees came to Fenway for the first time this season. Jon Lester- ostensibly the 'stopper'- was lit up like a Byung Hyun Kim-shaped Christmas Tree and the Red Sox would go on to lose by a 9-3 final. 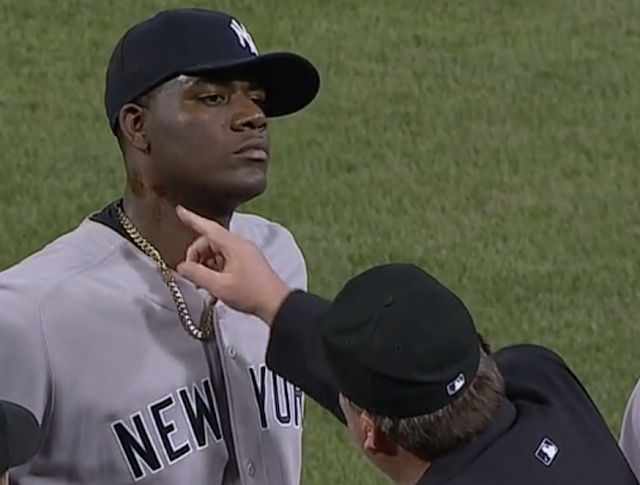 It was up to Lackey to stop the damage and he got off to a good start, getting the first two batters out before allowing a single from Carlos Beltran before Yankees catcher Brian McCann flied out to end the inning.

In the bottom of the first, Grady Sizemore led off with a triple before Pedroia singled to bring him home and give the Red Sox an early 1-0 lead. After Big Papi flew out to center, Napoli singled and Pedoira moved over to 3rd. Mike Carp then followed up with a fly ball to shallow left center for the second out, but not deep enough to bring Pedroia home. With 2 away, AJ Pierzynski singled to bring Pedroia home and make it a 2-0 Boston lead.

In the 2nd, Lackey got Soriano, Teixeria and Gardner to strike out in order, but what happened in the bottom of the 2nd will have people talking about this game for weeks. After New York starter Michael Pineda got Holt and Jackie Bradley Jr to fly out, Red Sox manager John Farrell asked the umpires to check Pineda for a foreign substance....which turned out to be pine tar on his neck. Pineda was immediately ejected- this coming 10 days after he appeared to get away with using pine tar on a glove in a game against the Red Sox in Yankee Stadium. Clearly Farrell didn't object because Pineda wasn't confounding the Red Sox batters. David Phelps came out of the Yankee bullpen and managed to strike out Grady Sizemore on one pitch [Pineda had a 2-strike count against Sizemore when the umpires went to the mound- NANESB!].

Lackey- apparently unaided by foreign substances on his person- continued dealing in the 3rd. Despite allowing a leadoff single to Brian Roberts, Lackey got Kelly Johnson to hit into a fielder's choice, before getting Jacoby Ellsbury and Derek Jeter to strike out swinging.

Dustin Pedroia led off the bottom of the 3rd by reaching 1st on a throwing error by Jeter. Big Papi then managed to beat the shift employed against him and hit a single. With nobody out and two on, Mike Napoli then hit a ball that New York outfielder Brett Gardner couldn't find- turned out it had jammed itself into the padding of the wall in fair territory by the Pesky Pole for a ground rule double [Gardner initially thought it was still rolling around along the wall behind him- NANESB!]. That brought Pedroia home but Big Papi had to hold up at third. Carp then struck out swinging before Pierzynski drew a walk and Xander Bogaerts flew out to right field- but not deep enough to bring Papi home. However, Papi would come home on a wild pitch by Phelps to make it a 4-0 Red Sox lead.

Lackey's only blemish on Wednesday night came in the 6th when Carlos Beltran led off the inning with a double and moved up to 3rd on a Brian McCann groundout. Alfonso Soriano then hit a sac fly deep enough to bring Beltran home to put the Yankees on the board and ruin Lackey's shutout bid. Lackey then struck out Teixera to end the 6th inning.

The Red Sox got some extra insurance in the bottom of the 8th when Xander Bogaerts got on board and advanced to second thanks to a throwing error from 3B Kelly Johnson before coming home on a Brock Holt RBI single. Koji Uehara came on in the 9th and immediately gave up a single to Alfonso Soriano, but struck Teixiera, Gardner and Roberts out to end the ballgame and give the Red Sox the 5-1 win.

Lackey was nothing short of stellar on Wednesday night, going 8 complete innings, allowing 7 hits, one earned run, no walks and striking out 11 while improving his record to 3-2. Mike Napoli went 3-4 with an RBI [the foam wall by the Pesky Pole robbing him of at least one more RBI- NANESB!] and Uehara made an appearance despite this not being a save situation.

Of course, the biggest takeaway was the Pineda pine tar fiasco- however, subtlety was never the Yankees' strong suit [which makes Pineda a better fit with the organization than Yankees fans will admit- NANESB!]. Reaction was instantaneous as the topics 'Yankees', 'Pineda', 'Pine Tar' and 'Girardi' began trending on social networking sites like twitter immediately.

Tomorrow represents the rubber game of the 3-game series before the Red Sox head off to Toronto for their first meeting of the season against the Blue Jays on Friday. CC Sabathia [2-2; 5.19 ERA] will take to the mound for New York while Boston sends out Felix Doubront [1-2; 5.48 ERA]. First pitch is scheduled for 7:10 ET and the game will be televised on NESN as well as the MLB network in some markets.


BOSTON BRUINS- The Boston Bruins have taken a 2-1 series lead over the Red Wings after Tuesday night's Game 3 from Joe Louis Arena. Most of the scoring took place in the first period and it was all Boston.

Dougie Hamilton got the Bruins on the board nine minutes into the first with a power play goal. With just over 4 minutes remaining in the first, Jimmy Howard couldn't get a glove on a Shawn Thornton rebound, but Jordan Caron was able to, beating Howard and putting the ruins up 2-0. Meanwhile, the Bruins defense managed to stymie the Red Wings and Tukka Rask ended up facing only 23 shots on goal- turning aside all of them.

With just over two minutes to go in regulation, the Red Wings decided to pull Howard for the extra attacker, but Patrice Bergeron was able to get ahold of the puck and score an empty-netter to give Boston a 3-0 lead. After going 1 for 3 on their power play opportunities, the Bruins take a 2-1 series lead as the series resumes Thursday night from Detroit. Game 4 is set to get underway from the Motor City at 8:00 ET and the game will be televised on NESN, NBC Sports as well as TSN north of the border.
Posted by Fenway_Nation at 11:50 PM