Islamists Seize Control Of Northern Iraq, Move to Within 100km of Baghdad 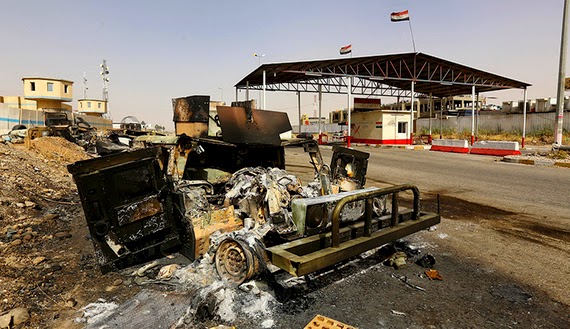 Disturbing reports out of Iraq this week as fighters from the Islamic group Islamic State of Iraq and the Levant (ISIS) swept through multiple cities in northern Iraq as security forces fled, in many cases leaving behind weapons, uniforms and vehicles for the battle-hardened terrorist group to use when further pressing their attack.

Iraqi forces were reportedly engaging ISIS fighters in Samarra while thousands of men in Baghdad turned up to volunteer to join the Army and halt the ISIS advance on the capital on Thursday. Cities captured in the ISIS offensive so far include Saddam Hussein's hometown of Fallujah, Ramadi, Tikrit and Iraq's second largest city- Mosul. According to Al Aan TV reporter Jenan Moussa, ISIS released statements through their twitter feed outlining strict new laws for the occupied cities that were to go into effect immediately- no alcohol, no tobacco, no firearms, women must cover up and only go outside 'when necessary'. The group has also promised to destroy shrines, monuments and graveyards and told Iraqi police and soldiers in the occupies territories to 'repent or die'. The International Business Times reports that ISIS may now be the wealthiest jihad group in the world after looting more than 500 Billion in Iraqi dinars (the equivalent of US$429 million) from Mosul's central bank.

Iran, which has considerable commercial and strategic interests in Iraq, reportedly sent the Quds unit of the Revolutionary Guards to help Noor Al-Maliki's government fight the emboldened ISIS movement as well as guard certain Shi'ite shrines from ISIS demolition. According to a Wall Street Journal report, Iranian officials authorized their Air force to bomb ISIS convoys if they come within 60 miles of the Iran-Iraq border.

Meanwhile, the Kurdish Peshmerga militia moved into positions abandoned by the retreating Iraqi Army in the oil-rich city of Kirkuk. Although both Shiite and Sunnis are wary of Kurdish involvement in the conflict, the battle-hardened Peshmerga is the most cohesive fighting force remaining in Iraq to go up against ISIS.

ISIS was formed roughly three years ago in Syria's Civil War as one faction that took up arms against the Bashr Al-Assad regime. However, the group also battled with the more secular Free Syrian Army which was made up of deserters from Bashr Al-Assad's security forces. An Al Qaeda offshoot, ISIS seized large swaths of territory from both Assad's security forces and the Free Syrian Army in eastern Syria before turning their attention to Iraq earlier this year.
Posted by Fenway_Nation at 10:24 PM