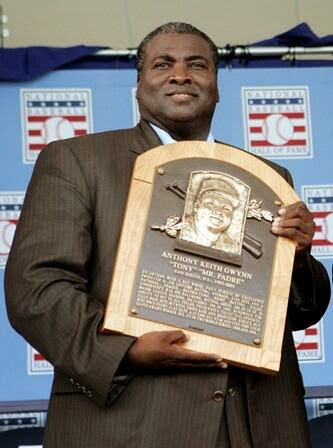 Born and raised in Long Beach, CA, Gwynn attended San Diego State where he excelled at both basketball and baseball. In fact, when the San Diego Padres drafted him in 1981, the then San Diego Clippers also drafted Gwynn in the 10th round of the NBA draft on the same day. Fortunately for the Padres, Gwynn quickly chose baseball over basketball.

The unassuming Gwynn made his major league debut in 1982 and was on the Padres roster both times San Diego advanced to the World Series [1984 and 1998, respectively- NANESB!]. Wearing the number 19 throughout his 19 year MLB career, Gwynn was a 15 time all star, won eight batting titles, seven silver sluggers and garnered five gold gloves. Gwynn was also one of the increasingly rare players who spent his entire career with one franchise. When the Padres moved into their new ballpark in Downtown San Diego, Gwynn's number was retired and a statue of 'Mr Padre' was erected in his honor. Gwynn could also be considered one of the few 'homegrown' figures in San Diego sports that spent his career with San Diego.

While not a home run hitter, Gwynn still had a career batting average of .338 and never hit below .308 in a full season. Gwynn did have 135 homers throughout his career along with 1,138 RBI. It was also believed that Gwynn could've been the first major-league hitter to reach the coveted .400 mark since Ted Williams in 1941 were it not for the strike-shortened season of 1994. However, Gwynn won NL batting title with a .368 average the following season.

After retiring in 2001, Gwynn returned to his alma mater to coach the Aztecs baseball team. In 2007 Gwynn was inducted into the baseball hall of fame along with Orioles shortstop Cal Ripken Jr. Gwynn is survived by his wife Alisha and two children- current Philadelphia Phillies outfielder Tony Gwynn Jr and R&B singer Anisha Nicole.

Earlier this year, the Padres had lost former manager and longtime broadcaster Jerry Coleman. Throughout Monday, mourners left hats and flowers at the base of his statue in Petco park. 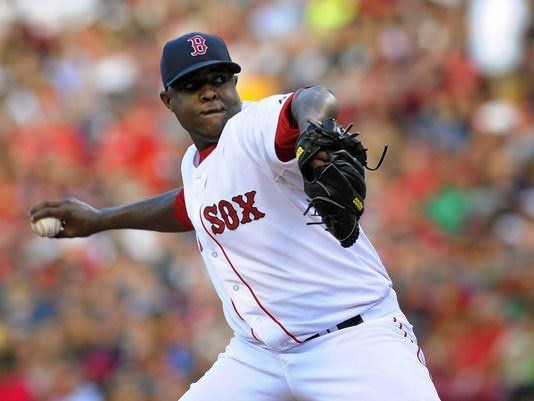 BOSTON RED SOX- After splitting a 4-game weekend series against the Tribe, the Red Sox played host to the Minnesota Twins on Monday- the team who started their notorious 10-game losing streak last month. Rubby De La Rosa would get the start against Minnesota's Kevin Correia and both starters would soon be locked in a scoreless deadlock.

Although the Red Sox would get some baserunners on, Boston didn't break through until the bottom of the 6th inning when Daniel Nava led off the inning with a single. Drew then hit a single to shallow center but got greedy and was thrown out trying to stretch it into a double- although Nava made it to 3rd. AJ Pierzynski then came up and hit a fly ball deep enough to left field to plate Nava to give Boston a 1-0 lead.

Rubby continued with another scoreless inning before Farrell went to the bullpen. Andrew Miller faced one batter, striking out Oswaldo Arcia before Burke Badenhop came into the game. Badenhop immediately gave up a single to Kurt Suzuki before Eduardo Escobar lined out and Sam Fuld doubled. The bases would be loaded after Badenhop hit Danny Santana with a pitch, but the Twins threat was extinguished when Brian Dozier struck out swinging. Although the Red Sox wouldn't get any more runs in the bottom of the 8th, Uehara would have a 1-2-3 ninth inning to seal the win for Boston. 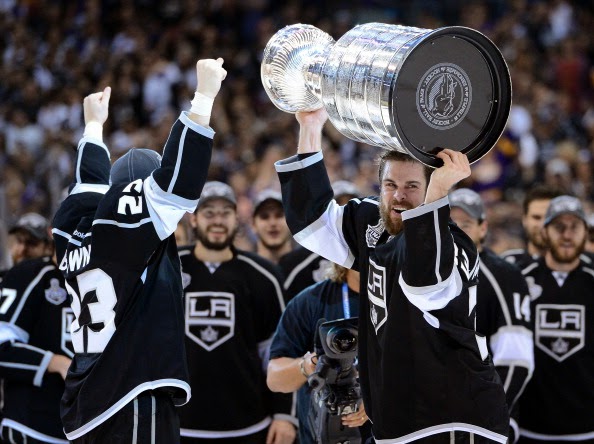 STANLEY CUP FINAL- After the New York Rangers got on the board with a 2-1 win on Wednesday night, the Stanley Cup Finals headed back to LA for a Game 5 at the Staples Center.

Justin Williams got LA on the board in the first six minutes of the game. However, after most of the 2nd period went by without scoring, the Rangers got on the board with a Chris Kreider power play goal and took the lead with a Brian Boyle shorthanded tally to head into the 2nd intermission with a 2-1 lead

However, the Kings were able to tie the contest up in the 3rd thanks to a Marian Gaborik power play goal and force OT- for the 3rd time in the 5-game series. After a scoreless overtime, the game headed to double OT where Alec Martinez beat Henrik Lundqvist to end the game and give the series to Los Angeles.

Kings goalie Jonathan Quick turned aside 28 of 30 shots faced while Lundqvist stopped 48 of 51 shots faced on Game 5 and Kings RW Justin Williamson was awarded the Conn Smythe trophy. The Stanley Cup title is LA's second in two seasons and comes after falling behind 0-3 to the San Jose Sharks earlier in the playoffs.
Posted by Fenway_Nation at 1:53 PM