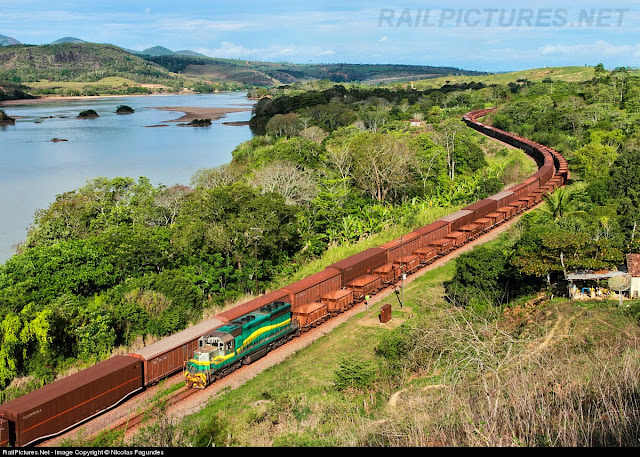 In honor of the host country for the 2014 World Cup, today's train of thought takes us back to Brazil.

The 905 km EFVM [Empresa Ferroviário Vitoria a Minas or Vitoria-Minas Railroad- NANESB!] is one of a couple of subsidiaries of VALE S.A. that won concessions to operate newly-privatized rail lines in Brazil. Although the line is one of the few that hauls long-distance passenger trains in Brazil along with commodities such as ore, grain, aggregates, pulp, steel and soybeans, what makes the EFVM stand out from heavy-duty railroading in the USA [and other parts of Brazil- NANESB!] is that it's done on narrow gauge. While narrow gauge in the USA and Canada is mostly for preservation and tourists, when your parent company is the third largest mining company in the world, it should probably some as no surprise that heavy hauling is expected.

And that's what the EFVM DD45s have basically been doing since 1970. At the time these narrow-gauge behemoths were built by EMD, they represented the most powerful single-engine locomotive available. With 3600 HP, the units were made to EFVM's unique specifications and followed the same design as the standard gauge EMD SD45 at the time- only the SD45 used two powered three axle trucks. While Union Pacific could boast of larger locomotives such as the DD35, DD35B and DD40AX, those had multiple engines on the same frame, unlike VALE's DDM45. The DDM45s [the 'M' reportedly standing for Meter gauge- NANESB!] entered service in Brazil in 1970 and have been faithfully soldiering on ever since- although new and secondhand locomotives from the USA have been added to both the EFVM fleet and others to help deal with the increasing traffic throughout Brazil.

Here, railpictures.net contributor Nicolas Fagundes caught EFVM DDM45 #877 in VALE colors leading an empty stone train that's snaking its way past a wood pulp train along the shores of Rio Doce- the namesake of one of VALE's predecessors- in Barbados, Espirto Santo in October 2013. The pulp train is likely headed to a yard further down the line along the banks of the river while the #877 is likely going at least as far as the junction town of Colatina, about 12 km further west.
Posted by Fenway_Nation at 10:06 PM