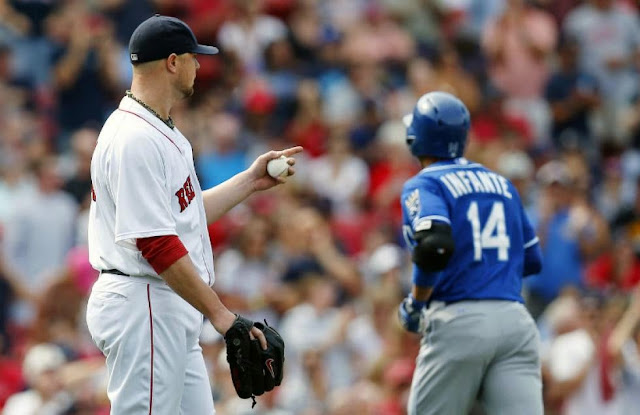 RED SOX- I'm not going to come right out and say that AJ Pierzynski was part of the problem, but Boston's record since cutting the veteran catcher should speak for itself [although with the All-Star Break, it's a relatively small sample size- NANESB!].

The series against Kansas City got off to a promising start with a come-from-behind 5-4 win against the Royals at Fenway Park on Friday night. On Saturday, the Red Sox once again trailed early but were able to tie the game at 1-1 before Mike Napoli's solo homer in the bottom of the 6th put the Red Sox up for good, as it turned out.

Heading into Sunday's game against the Royals, the Red Sox had managed to go 6-1 with a team .292 batting average (.290 with runners in scoring position) and a combined ERA of 2.57 in their last 7 games [granted some of this was padded by the 11-0 romp in Houston immediately before the All Star break- NANESB!]. In just four games with the Red Sox, C Christian Vasquez- who is splitting time at backstop with David Ross- has a .385 batting average with 5 RBI.

On Sunday, the Red Sox got out to an early lead after back to back singles by Brock Holt and Daniel Nava off Kansas City starter Yordano Ventura opened up the bottom of the first. Holt, who moved to 3rd on Nava's single, came home after Pedroia grounded into a fielder's choice to give Boston a quick 1-0 lead.

Jon Lester, who had struggled a little bit in the first after hitting Eric Hosmer with a pitch in the top of the first, had settled down and was cruising along nicely through the Royals lineup.

In the bottom of the 3rd, David Ross led off the inning with a walk and Jackie Bradley Jr followed that up with a single. JBJ and Ross advanced to 2nd and 3rd respectively on Borck Holt's groundout, and with two runners in scoring position, Daniel Nava belted a ground-rule double to right field to make it a 3-0 Red Sox lead. Ventura then walked Pedroia, but got David Ortiz to ground out and Mike Carp to fly out to shallow center to get out of the inning.

Shane Victorino, who returned to the Red Sox lineup on Saturday, led off the bottom of the 4th with a double to left field. Although Ventura got Stephen Drew on a fly ball to center field for the first out of the inning, David Ross took a 1-1 offering from Ventura and put it into the Monster seats for a 2-run homer, making it a 5-0 game. This was followed up by back to back singles from JBJ and Brock Holt, with Bradley moving to 3rd on Holt's hit and then coming home on Daniel Nava's sac fly to deep center, making it a 6-0 game.

Meanwhile, Lester would throw 8 complete innings of shutout baseball giving up just four hits and two walks while striking out eight batters. Tazawa and Mujica would come out of the pen to close out the game. The Red Sox win by a 6-0 final and compete a sweep of the Kansas City Royals to start off the second half of the season.

Up next is a big 4-game series against the Blue Jays north of the border at the Rogers Centre. John Lackey [10-6; 3.79 ERA] is scheduled to start on Monday night against the Jays' Drew Hutchinson [6-8; 4.16 ERA]. First pitch is scheduled for 7:07 ET and the game will be televised on NESN. Toronto just wrapped up a homestand where they took two out of three from the struggling Texas Rangers to start off their second half of the season.

ELSEWHERE IN THE AL EAST- New York Yankees starter CC Sabathia is expected to undergo season-ending surgery on his right knee this week. So far this season, Sabathia has gone 3-4 with a 5.28 ERA for New York. Earlier this month, Sabathia had a setback while in the minors on a rehab assignement after going on the Yankee's DL.

Yankee's general manager Brian Cashman seemed optimistic that Sabathia could be back with the Yankees by Spring Training in 2015.


ELSEWHERE IN MLB- The Angels have acquired closer Houston Street from the San Diego Padres for a number of prospects on Friday. Street saved 24 games in 33 appearances for the 3rd place Padres this season with a 1.09 ERA. In exchange for Street, San Diego gets prospects in the form of 2B Taylor Lindsey, pitchers Elliot Morris and Roy Alvarez and SS Jose Rondon.
Posted by Fenway_Nation at 1:26 PM