Election 2014- A Red Tsunami From Sea to Shining Sea 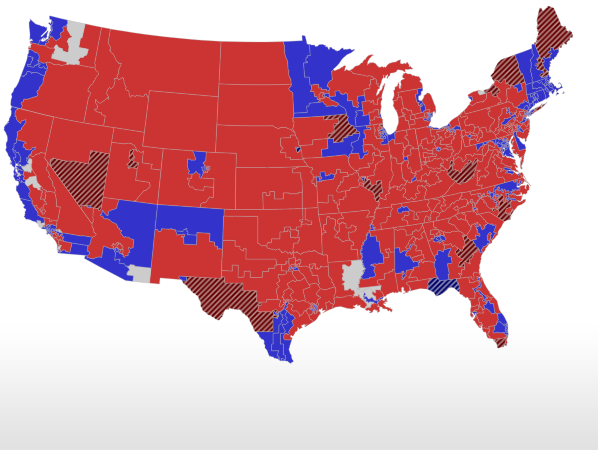 From Maine to American Samoa, Tuesday night was a bad night for the Democrats.

The big story of the night was that the Democrats and Majority Leader Harry Reid lost their majority in the United States Senate on election day after Republicans picked up no fewer than seven seats, with some race still to be decided through a recount or runoff. Although some Democrats had distanced themselves from President Obama while campaigning, the President in an interview said that his policies were on the ballot and he could count on support from Democrat incumbents- even the ones who were keeping him at arm's length on the campaign trail.

Heading into Election Day, the GOP needed a net gain of six seats in the Senate to regain a majority they hadn't held since 2006. It was widely believed that West Virginia, South Dakota and Montana would be fairly easy pickups for the Republicans, with states like Virginia, Iowa, North Carolina, New Hampshire, Kentucky, Minnesota, South Carolina, Alaska, Louisiana, Arkansas and Colorado up for grabs in close races.

For veterans, one of the more noteworthy developments was that Arkansas Republican Tom Cotton became the first-ever Iraq war veteran elected to the US Senate after defeating incumbent Democrat Mark Pryor by a margin of nearly 10 points. Later on in the night, Cotton was joined by Joni Ernst, a fellow Iraq war veteran, Lieutenant Colonel in the Iowa National Guard and state senator who was campaigning against congressman Bruce Braley for Iowa's senate seat that was open after Democrat Tom Harkin announced his retirement.

In South Carolina, former Congressman Tim Scott became the first black US senator from the South since Reconstruction- and the first ever to be elected to both the House of Representatives and US Senate. Scott was technically the incumbent, since governor Nikki Haley appointed him to replace fellow Republican Jim DeMint who retired to become president of conservative think-tank The Heritage Foundation in 2012.

Before Tuesday, Democrats took some solace in the projections out of Kansas that had Independent Greg Orman leading incumbent Republican Pat Roberts before election day. Orman, who declined to state whether he'd caucus with Democrats or Republicans if elected although Orman reportedly received donations from Democrat-supporting PACs and Vice President Biden predicted that Orman would end up caucusing with Democrats and narrowly preserve the party's majority in the Senate.

But perhaps the biggest prize for either party was Colorado. Over the last decade, Democrats had prided themselves on making Colorado a model on turning a red state blue [and boasted they were going to repeat the process in Texas, more on that a little later- NANESB!]. Incumbent Mark Udall ran on a campaign reminiscent of the Democrat's 2012 "War on Women", claiming that GOP challenger Corey Gardner would outlaw contraceptives and earning himself the nickname Mark Uterus.

In Louisiana, that race is heading to a December runoff since incumbent Democrat Mary Landrieu failed to get more than 50% of the total vote. However, the DSCC reportedly yanked a proposed $1.5 million ad buy in certain Louisiana markets, indicating that donors are less than confident about Landrieu's chances against Cassidy in the runoff.

The 'wave' wasn't just limited to a pickup of seven seats in the US Senate for the GOP. In the House of Representatives, not only did beleaguered incumbents such as New York Rep Michael Grimm [R- Staten Island] survive, but the Republicans gained a total of 15 seats [with some races in California and Maryland so close they're awaiting absentee and provisional ballots to decide the campaign- NANESB!]. Some of these included retired Air Force colonel Martha McSally beating Democrat representative Ron Barber in Arizona's 2nd congressional district- which comprised much of former congresswoman Gabby Giffords' district that had been held by Democrats after a 2011 assassination attempt on Giffords and redistricting. In Utah, former Saratoga Springs, UT mayor Mia Love ran as a Republican against Democrat Doug Owens for Representative in Utah's 4th Congressional District for the House seat up for grabs when Democrat Jim Matheson announced his retirement after the 2014 elections. Love- the daughter of Haitian immigrants- is Utah's first female congresswoman and the GOP's first black congresswoman [the NAACP was remarkably silent on the results of her election- NANESB!].

Republican governors favored just as well as the Senate and House races as it turned out. In Wisconsin, incumbent Scott Walker was elected governor for the third time since 2010- after a protracted battle over public sector unions between Democrats and the first-terms governor, the Democrats and unions successfully launched a recall campaign against Walker in 2012. However, Walker ultimately prevailed despite a well-funded campaign from unions and wealthy Democrat donors and PACs.

Democrat state representative Wendy Davis made a name for herself with wealthy liberal donors and the pro-abortion crowd after a lengthy filibuster on the floor of the State House in Austin, TX last year that was meant to hold up legislation that would prohibit abortions after 20 weeks. Shortly after the filibuster made her a rising star with the Democrats, she announced her candidacy for governor against Texas attorney general Greg Abbott. Although Davis wasn't expected to win, her candidacy was a trial balloon by out-of-state liberal Super PACs to try and turn Texas into a blue state. Davis ended up losing to abbot by more than 20 points, which in turned siphoned Democrat donor money away from much more competitive races.

In Maine, incumbent Paul LePage carried all but two of the sixteen counties throughout the state. In Massachusetts, Democrat Martha Coakley- who lost the 2009 Massachusetts' special election for US Senate to challenger Scott Brown- lost to Republican challenger and businessman Charlie Baker on election day. In the Midwest, incumbent Michigan governor Rick Snyder won 51% of the voting after drawing the ire of unions by making the Wolverine state a right-to-work state in his first term as governor. In President Obama's home state of Illinois, incumbent Democrat Pat Quinn lost to republican businessman Bruce Rauner. Although Maryland's Democrat governor Martin O'Malley was term-limited, pundits both left and right believed that his Lieutenant Governor, Anothony G Brown, would coast to an easy election win over Republican challenger and Maryland businessman Larry Hogan but Hogan shocked the pollsters and pundits by getting just over 51% of the vote. Out west, someone forgot to tell incumbent GOP governors Brian Sandoval and Susana Martinez that their party has a problem with Latinos as the governors of Nevada and New Mexico coasted to an easy re-election. Sandoval received more than 70% of the vote just weeks after he had announced a deal that where Tesla Motors [NASDAQ- TSLA] announced they would open up a factory outside of Reno, NV in exchange for substantial tax breaks. Meanwhile, Susana Martinez won 57% of the ballots cast in New Mexico on election day.

It wasn't just the governor's mansions that were going red in 2014. On the state level, Real Clear Politics reports that the Republicans control an unprecedented 68 out of 98 possible partisan legislative chambers on the state level.
Posted by Fenway_Nation at 11:46 PM